Ebay this morning launched a new site, dedicated to shopping for furniture and other items for the home. Called eBay Collective, the site also takes advantage of technology from the company’s recently announced acquisition of visual search engine Corrigon, which it bought for under $30 million. On eBay Collective, the technology has been integrated to power a “Shop the Room” feature which lets online shoppers hover over an image of a fully designed space, and then the tool will search across eBay inventory to surface items that are close matches to that portion of the image.

Corrigon, which had been around since 2008, had developed a way to search and identify objects within an image, then match that with other images or links to products. In a larger photo, you can hover over a specific portion of the image and Corrigon’s tech can see the object in that section, then match it with others. This is how eBay has implemented the technology on its new site. 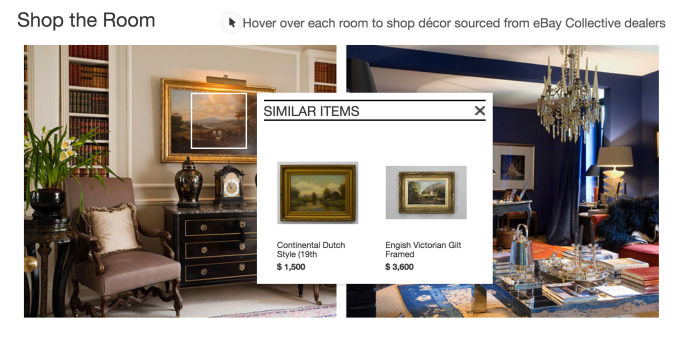 While eBay Collective is meant to cater to more of a high-end crowd looking for unique items, antiques, contemporary design, fine art, and more, this “Shop the Room” tool lets you find the same sort of items at varying price points by connecting the design inspiration to eBay’s wider inventory.

The site itself launched with 21 dealers on board, who had been specifically invited to participate by eBay. Listings include things like a rare Andy Warhol signed screenprint, a pair of Gio Ponti Armchairs (Italy, c. 1964), and a Mies van der Rohe Chaise Lounge in original leather (c. 1980), for example.

The company is also syndicating content from Architectural Digest and Archdigest.com to further fill the site with information about decorating, shopping and other industry events.

In addition, Ebay has developed a “white-glove” managed shipping service for items on eBay Collective, which offers flat rates on continental U.S. freight to simplify the transaction process, it says.

The site is the latest attempt from eBay at curating its large inventory selection in order to better cater to its 164 million active buyers. The company also this year launched eBay Wine, in partnership with Drync, as another means of offering a dedicated shopping portal aimed at a specific demographic.