Google Home is Google’s answer to Amazon line’s of voice-powered Echo devices. After announcing Home at its I/O developer conference this spring, the company today unveiled both its price ($129) and shipping date (November 4) at its annual hardware event in San Francisco. Maybe more importantly, though, we also got a first chance to try out Home ourselves.

Home is powered by the Google Assistant, which is basically a re-branded version of Google’s voice-powered search and Google Now. It’s smarter and more conversational, but for the most part you will get the same results from using “OK Google” on your phone today as from the Google Assistant (minus features like booking OpenTable reservations with your voice). Unlike Google’s current voice-powered assistant, Home also integrates with music apps like Spotify and Pandora. Soon, it’ll also allow you to cast Netflix videos to any TV with a Chromecast attached to it.

All of that intelligence is in the cloud, though. As far as hardware goes, Home is all about how well it can recognize your voice and how solid the hardware feels. The good news here is that even though Home only has two microphones (compared to Amazon Echo’s seven), it still worked really well in the noisy demo environment after Google’s keynote today. It easily understood my questions when I was standing next to it and its speakers were more than loud enough to make it stand out over the loud chatter around it. After things quieted down, I also started issuing my “OK Google” commands from 10 feet away and, again, Home didn’t hesitate to answer. It doesn’t seem like having fewer microphones than the Echo is really an issue here, but we still have to test Home in a real home environment to be sure. 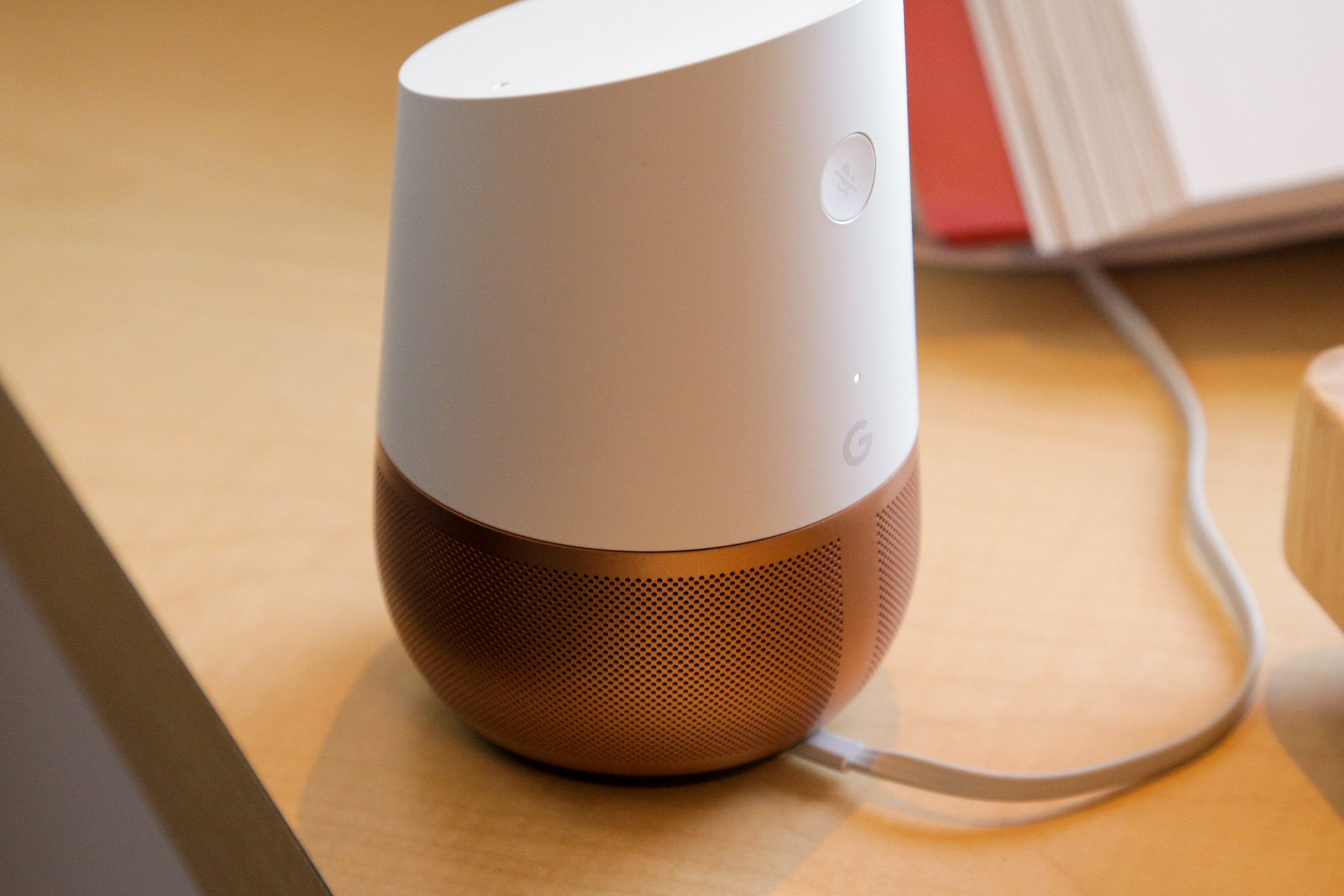 As far as the hardware goes, the Home feels pretty solid and is definitely heavier than it looks. Most of that weight is probably due to the speaker, which is at the bottom of the unit and sits in an interchangeable cradle that attaches to the Home with the help of two magnets (those bases will retail for $20 each).

How well does the Google Assistant work on Home? Based on the little time we spent with it, the answer currently is “pretty well.” It handles all the usual Google queries without issues, but it also does a good job at finding music to play. I asked it to play some hipster music and it happily obliged. Same for playing songs from individual bands. Google also demoed integrations with Philips’ Hue lights and the Nest thermostat. All of that worked as expected.

One thing that struck me, though, was that you can’t really have a conversation with the Assistant without starting every sentence with “OK Google.” That works really well to start up the Home, but when you ask follow-up questions, it starts feeling like work. “OK Google. Who is the president of the United States?” “Barack Obama is the president of the United States.” “OK Google. How old is he?” “Barack Obama is 55 years old.” “OK Google. Where was he born?”

Other than that, though, Home feels like it will make for a solid entry into this market. Once Google opens up the Assistant to third-party developers in the way Amazon has already done, it’ll basically have feature parity with its competitors. At that point, it’s all about how well Google handles your queries — and while all the major tech companies are pushing their AI services pretty hard, Google has already shown that it can easily compete (and often outperform) most of its competitors in this arena.

Google Home will set you back $129 and is available for pre-order now. It will start shipping on November 4.