Joining celebrity investors like Snoop Dogg, Ashton Kutcher, and Justin Bieber, Queen Bey is bringing her supreme business skills to the tech world. Beyoncé and the management company she started called Parkwood Entertainment have invested $150,000 into Sidestep, an app for buying concert merchandise and skipping the line to pick it up at the show.

Sidestep originally started selling t-shirts and posters for Beyoncé on her Formation World Tour. But after two weeks of seeing its success, Beyoncé and Parkwood invested in Sidestep’s seed round of funding.

Sidestep CEO Eric Jones tells me they “wanted Beyoncé’s tour to be very focused on tech”, and liked the idea of “a tiny scrappy startup doing the biggest tour in the world.” 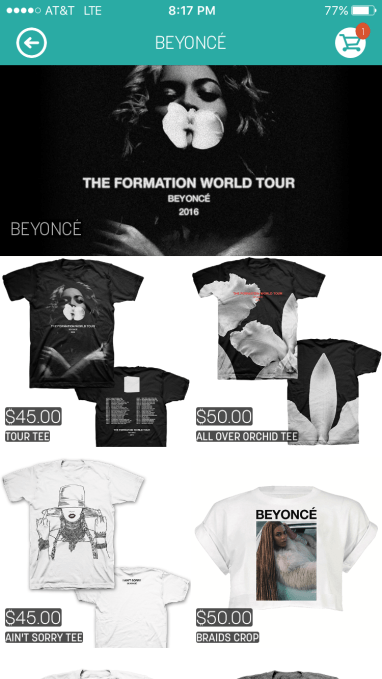 Beyoncé previously invested in WTRMLN WTR, a watermelon beverage company. She’s believed to have ties to juicing machine maker Juicero, though that company refuses to talk about their relationship. [Update: Beyonce helped start vegan food company 22 Day Nutrition as well.] She’s also a stakeholder in streaming service Tidal thanks to her agreement to give it early access to her music. With her investment in Sidestep, though, she could directly help artists earn more money.

Musicians hoping to get rich off skimpy streaming royalties are kidding themselves. The real money is in using streaming to get famous and then selling concert tickets and merchandise.

But due to long lines and, you know, wanting to actually see the show, many people avoid buying t-shirts and other merch at concerts. That’s where Sidestep steps in.

The startup lets you order tour merchandise before, during, or even after the show from its smartphone app. You can then Sidestep the merch booth line, flash a QR code at the dedicated pickup spot, and grab your items in seconds. Or you can have them delivered to your home. This way you can be sure to get whatever stuff you want in the right size with no fear of wasting time or it selling out.

Along with Beyoncé gear, you can buy merch from artists like Guns N’ Roses, Fall Out Boy, Selena Gomez, and Weezer via Sidestep. The startup gives artists a ton of data about who’s buying, and keeps a 10% service fee charged to the customer.

Sidestep has raised a total of $1.7 million from Beyoncé and other investors including actor Jared Leto, former Lady Gaga manager Troy Carter and Cross Culture Ventures, and the previous CEO of the LA Dodgers. The app has done over $2 million in sales, up 10X from last year. The company competed in TechCrunch’s 1st And Future sports startup hackathon earlier this year.

Sidestep will have to compete with other merchandise startups like Merchbar, an Amazon-like webstore, and Yoshirt, which lets fans design custom items with a band’s logos and photos. and some people might rather stand in line than pay 10% extra. But with streaming royalties still unable to make up for the drop in album sales, artists will do whatever they can to sell more shirts, and these startups could flourish.