Tinder is introducing a new premium feature called Tinder Boost. The feature will let users pay to have their profiles displayed first to other users on the app in the same locale for 30 minutes.

According to the announcement, it’s all about saving users’ time and making sure that the Tinder experience is maximized during the time that they’re actually using the app.

You’ve got people to meet and places to be. In fact, Tinder was designed with this in mind, providing you a simple, fun introduction to new people nearby so you can get out and meet them in the real world. Still, sometimes there just aren’t enough hours in the day and what you need is a boost in the right direction. Tinder Boost gives you exactly that: a way to be one of the top profiles in your area for 30 minutes. Increase your chances for a match—you can get up to 10x more profile views while boosting.

Tinder often tests new products in Australia first before going live globally, and Tinder Boost is no different. Australian Tinder users will have access to Tinder Boost soon, while other markets will have to wait until Tinder launches the finalized product.

Which brings me to pricing. Just as much as Tinder is using Australia to test the product itself, the company is likely also going to be testing pricing. That said, you can expect this particular feature to err on the pricier side, given that it’s only useful if it’s relatively scarce.

If everyone in a five-mile radius is able to purchase a quick Boost on a Friday night, showing up ‘first’ in someone’s Tinder feed starts to lose its effectiveness, and ultimately, its allure. 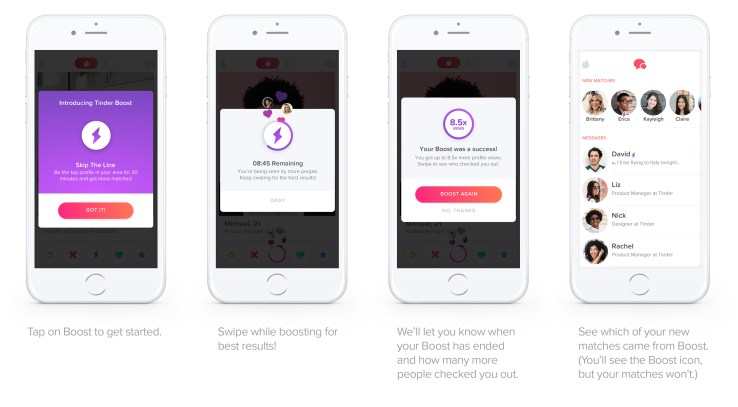 Tinder Plus users will get one free Boost per week, with the ability to purchase more. Users who don’t have Tinder Plus will also be able to purchase Boosts without joining the premium tier. To use the feature, you must be in Tinder swiping mode.

Taking cues from the Super Like, a premium feature that lets you send someone an extra-special like instead of a regular like, we can expect the Boosts to be sold both as singles and in packages.

That said, Tinder isn’t sharing exact numbers on the price just yet.

“With Tinder Boost, users can maximize their time and match potential by being one of the top profiles seen in their area with the tap of a button,” said Sean Rad in an emailed statement. “With 1.4 billion swipes a day on our platform, sometimes our users want to be sure that they are swiped to the front. We think our users in Australia will love this feature and hope to release it globally soon.”

Tinder isn’t the first to offer a product that puts you at the front of the dating line.

Match.com, a brand within Tinder’s parent company Match Group, also offers a paid Boost feature that puts a user’s profile in the Popular Singles tab and at the top of search results. Bumble, an app like Tinder but where women are in the driver’s seat, also launched a time-saving feature as part of its premium tier, letting you see at the top of your feed people who have already liked you.

However, like Match’s Boost, Tinder stands to generate even more revenue off the Boost feature as it’s sold on top of Tinder Plus (save for the free weekly Boost) and it isn’t available for free to unpaid users.

Tinder Boost is now available in Australia and we’ll be sure to let you know when it launches globally.