If you combined the fastest and slowest types of social media, the result could be both must-see and never-forgotten.

YouTube lacks short-form, frequently updated content, but is synonymous with video and that popularity brings in lucrative ads. Twitter is struggling with growth and monetization, but it’s the pulse of the planet, generating tons of real-time content and engagement.

Together they could be a powerful team if Google’s willing to pay the price, which Kara Swisher reports could be around $30 billion. 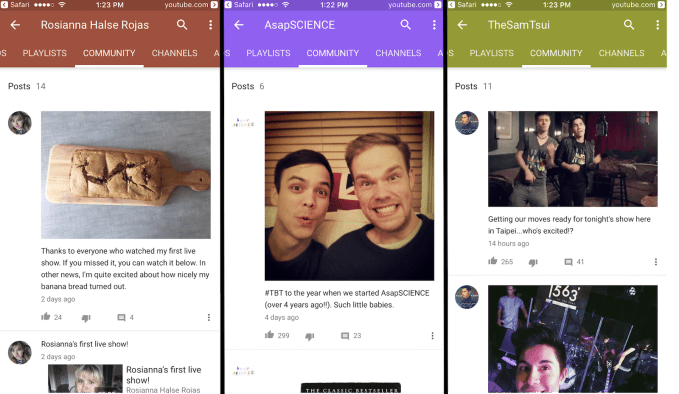 Twitter is also in talks with Verizon, Salesforce, and Microsoft, TechCrunch reported following a story by CNBC about Twitter’s interest in selling out. And Disney is considering a bid too.

But of all those potential acquirers, Google seems like the best fit. It has products that would mesh well with Twitter. It’s proven unable to build its own successful social products beyond its acquisition of YouTube. And it has its insanely profitable search advertising business to support the financially unstable Twitter.

Google would get to further its goal of organizing the world’s information by ingesting Twitter’s data firehose, which could give Google’s AI extra insights into what’s going on in the world and everyone’s reactions. Plus it might be able to monetize all that data better by combining Twitter with everything Google knows from AdWords and AdSense.

But the best synergy lies in uniting YouTube’s sporadic video content with Twitter’s constant chatter. A strong integration into YouTube could  increase the frequency of return visits to the channels of content creators by offering a one-stop-shop for fandom, encompassing off-the-cuff tweets and polished videos.

And it just so happens that YouTube recently built its own Twitter-style feature called YouTube Community that it could replace with the real thing.

YouTube Community is a sidebar/tab for YouTube Channels that lets creators share text, photos, GIFs, links, and more to stoke a deeper form of connection with their viewers. The strategy is to get users to come back to those channels more often than just when the creator publishes a new video, which might only be once or twice a week. With all of YouTube’s algorithmic suggestions, it could then get those visitors to watch other new videos or older ones by their favorite stars.

That would allow YouTube to better compete with Facebook, which has built an enormous audience for spontaneous video discovery. Users come to the News Feed to see what’s up with friends, but end up watching random videos. That gives Facebook lots of opportunities to serve high-priced video ads, since users weren’t trying to watch something specific anyways. YouTube has historically been more of purposeful viewing destination that users visit because they followed a link to a certain video or wanted to see the latest clip from creators they follow.

Meanwhile, Twitter could dramatically benefit from exposure to YouTube’s mainstream and teen audiences. Many people are still confused about why they would want to sign up for Twitter, especially if they’re not a public figure and might not be able to build a big audience for their tweets. But YouTube could teach them the joys of Twitter lurking, where users follow stars or thought leaders and perhaps reply, but don’t necessarily have to produce original tweets. 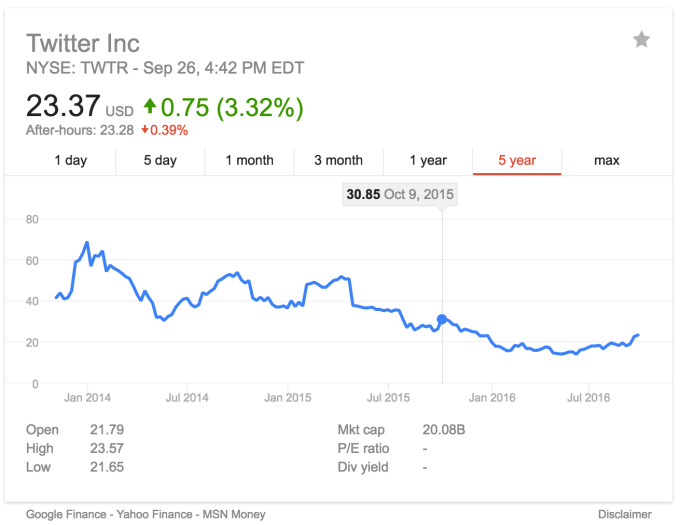 An acquisition by Google would also take the pressure off Twitter to monetize directly, which hasn’t been going well with revenue growth sinking fast. Many of Twitter’s ad units, like Sponsored Tweets, feel easily skippable.

People already skim rather than meticulously read their Twitter timeline, making it easier to pass by the ads than ones on Facebook, where algorithmic sorting and a focus on real friends encourages people to read each post — and the ads in between. Twitter’s best performing ads are videos, and YouTube’s experience and advertiser connections could give them a boost.

In any case, something has to change for Twitter. Except for investors trying to capitalize on a potential sale, its share price has sunk lower and lower. Each earnings report has seemed more hopeless than the last as a user growth problem has festered into a revenue growth problem. Some fresh management and cross-promotion from a proven tech giant like Google could mend its wings.