With what looks to be an eye on Snapchat’s selfie-loving fanbase, messaging platform Telegram has beefed up its in-app photo editor in what it dubs an “entertainment-heavy update” — including an option that lets users customize selfies by adding cartoon masks that automatically align on their faces. Snapchat of course has a lenses feature for transforming users’ selfies.

The Telegram feature is far less sophisticated than Snapchat’s lenses; more ‘selfie augmentation’ than full facial transformation, given it only works with photos (not video). And is really just another sticker set that can be added to photos you’ve already snapped. But the popularity of stickers on messaging platforms should not be underestimated.

Masks can be applied via Telegram’s photo editor by tapping on the pen to edit the photo you’ve selected to send and then the envelope to bring up mask sets.

Users are also able to create custom masks and upload them to the platform by using the /newmasks command and Telegram’s @stickers bot. (Users receiving photos with masks will also be able to see which sets the masks came from.)

For now, there’s a range of cartoonish masks created by Telegram for users to choose from — such as animal faces, silly glasses, comedy beards, hats, wigs etc, along with other cartoonish props to drop into photos, such as stars, hearts, more cute animals, bubble-lettered captions and so on. Existing Telegram stickers can also be added in to photos.

Also in this visually themed update Telegram now lets users create custom GIFs to send in their chats by recording a video and then tapping a new mute button to turn it into a looping GIF. GIFs can also be augmented with the usual emoji, text, colored scribbles etc. 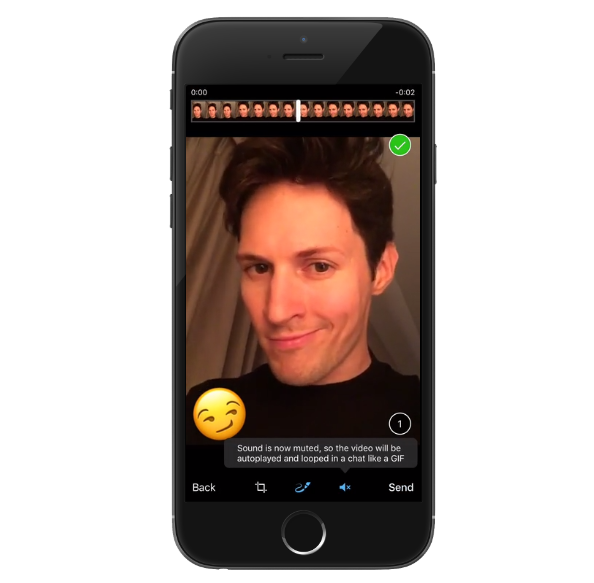 It notes that any DIY GIFs a user creates are saved to the app’s GIF section — “so that you can quickly react to anything with a set of your own prerecorded GIF-emotions”.

Also added in this update: a trending stickers tab — likely as a way to help with sticker discovery. Visuals may be more universally understood than text, but finding the perfect sticker among countless pouts, smirks and side-eyes can be as time-consuming as searching for le mot juste.

Telegram is not breaking out any updated user metrics at this point, with Durov telling TechCrunch it’s keeping its powder dry for big yearly reveals on that front.

The startup held a glitzy party at MWC in Barcelona last February, trumpeting 100M monthly active users. At the time it also said it was adding 350,000 new users each day, with some 15BN messages generated daily. (For some comparative context, Snapchat, announced 100M daily active users back in March.)