You may have heard of stickers, the cutesy, cartoonish version of emojis, but did you know that they can also be a money-spinner?

Japanese mobile messaging app Line is banking more than $20 million per month selling sticker packs, which typically trade for $1-2 for sets of 12-18, according to data from the company.

It’s not an overstatement to say that Line has single-handedly pioneered stickers, which are now a fairly staple part of most social apps. But, beyond being cute, they generated the company an altogether-not-too-shabby JPY 28,725 million ($271 million) in revenue in 2015 — that’s up 38 percent on the previous year.

It’s also more than double the already impressive $10 million that the company was banking in 2013, and it accounts for around one-quarter of Line’s total sales. That’s important since Line is dependent on Japan for nearly 90 percent of its revenue, and stickers have appeal outside of the country and among more casual users. Indeed, Line said that its users send an average of 389 million stickers — paid and free — each day, that’s around nine percent of the total number of messages sent on the service daily.

Stickers aren’t the only surprising form of income for Line: the company also disclosed that it made over JPY 2 billion ($18.8 million) from sales of merchandising and licensing deals last year for its Line characters, the figures who star in its sticker packs and front its brand. That’s double the 2014 figure. 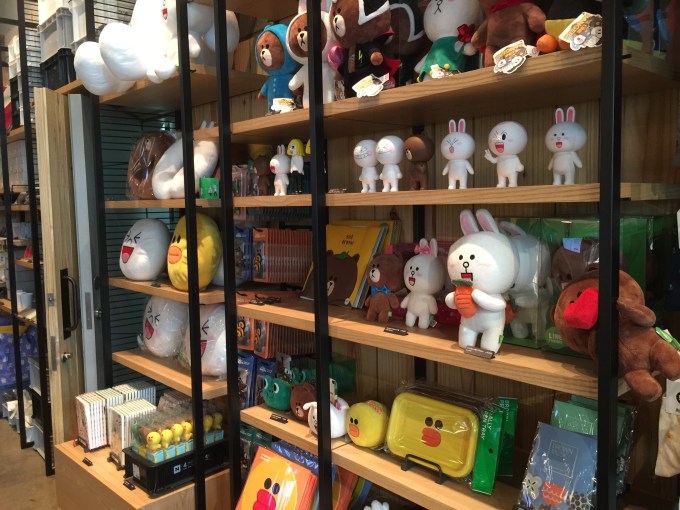 Characters like Brown the mute but caring bear and impulsive, emotional figure Moon have made the leap from chat app to small screen via a TV show that started out in Line’s native Japan but have been exported worldwide. But Line also cashes in on its faces through a number of physical stores in Asia and beyond — such as the one we visited in Korea — that sell all manner of merchandising, from mugs, to pillows, plush dolls and actual physical stickers.

Together, the stickers and merchandising account for nearly one-third of Line’s total revenue, but they also help put a face on the app which the company thinks can help it win new markets. It remains to be seen if now, in the year 2016 with the messaging space long matured, whether dislodging a chat app in a country is even possible, but Line certainly has a strong brand which could resonate among other parts of Asia, where most of its 215 million active users are based.

Ultimately Line makes most of its money through focused advertising and games and it hasn’t broken even yet. But, if nothing else, its sticker and merchandising sales show that the offline component to digital businesses shouldn’t be underestimated.