A well-kept lawn is one of the most common mixed blessings with which homeowners can treat/afflict themselves. Robin is a startup looking to take as much pain out of the process as possible, both by improving the way you hire and pay for your yard’s care, and soon, by putting a robot on the job.

“We were trying to find lawn care companies that were reliable, having to pay with cash or checks under doormats,” Robin’s co-founder, Justin Crandall, told TechCrunch. “I mean, we’re all tech guys from the 21st century, and it was hard to believe that there’s this $70 billion business that still operates the same way it did 30 years ago.”

It isn’t really hard to see why. Lawn care businesses are often tiny — perhaps just two or three people and a truck — and tend to serve only a single city or even neighborhood; growth is high-cost and high-risk, and margins are low to begin with. Probably all you’ll earn yourself is trouble. 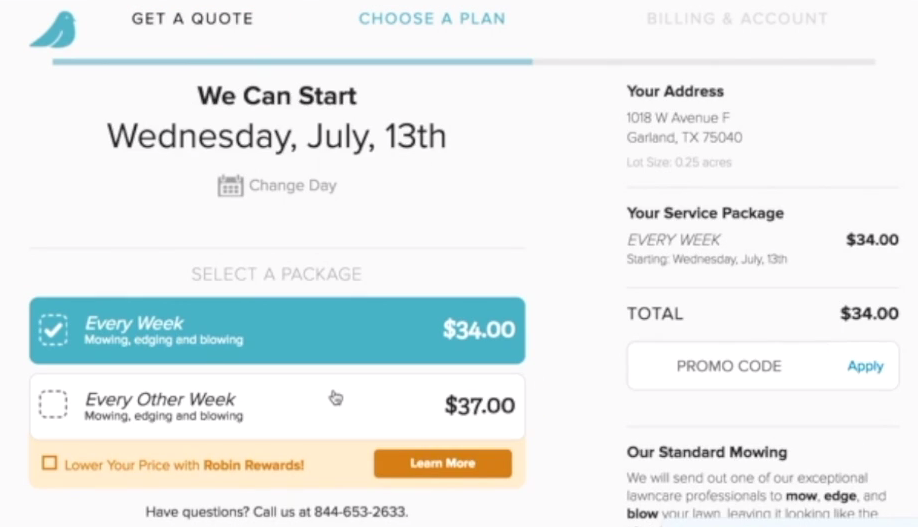 So Robin isn’t trying to take over with fancy edgers or Square readers in every truck. Instead, it’s building relationships with existing businesses of all sizes and connecting them with people who crave a simple online transaction.

Onboarding is simple: You put in your address and a quote is generated automatically from a database of property records, from which Robin estimates lawn size. You pick a start date and recurring times, and any extras like edging or weeding, then check out. Boom, you’re done. No on-site visits, no callbacks, no wrangling a payment method that works when you’re gone — like the inevitable check left under the doormat.

It’s important, Crandall noted, to make the process as frictionless as possible: “This is a decision people hate to make. They will put it off forever.” So if they’re in the mood to sign up, you have to take advantage of it; as with other forms of e-commerce, a half hour delay, to say nothing of a day or two, can lose the sale.

What Robin is doing is basically filling these crews’ dance cards, while also — critically — optimizing routes and job management. Bouncing a dozen miles around town a few times a day eats time and money, and since time is money, that’s a lot of money being eaten. By working as a clearinghouse for jobs, routing and scheduling can be improved and everyone benefits.

“We have crews that are extremely reliable, and we basically fill their excess capacity. The more jobs they can get done in a day, the more profitable they are,” said Crandall. The result is everyone works more and earns more, while scrambling less.

There’s competition in the lawn care space, but not much, he said. Others are taking aim at real estate or multi-property owners, or aiming to be an “Uber for mowing,” which may make sense now and then, but really, lawn care is more of a perennial need than something you spontaneously desire.

Robin also works with very small providers that generally work for less but have trouble filling their whole week with work. Crandall claims that gives them a significant price advantage over competitors, perhaps $10 a cut. The savings add up fast on the consumer side, and the extra work adds up fast on the provider side.

But if Robin’s next gambit pays off, you’ll get a freshly mowed lawn on the regular without human involvement at all.

The technology actually isn’t new. It’s just one of those weird situations where something has caught on everywhere but the States.

“What’s amazing is that in Europe, these things are standard,” Crandall said. “There are like 200,000 of them over there! The technology itself is proven, but it is complicated to install, and there’s the price, of course.”

So it’s that last part that Robin will be helping with: helping people justify and deal with the $1,000-plus price tag of joining the self-guided mowing set.

“We’ll have these branded mowers, we’re going straight to the manufacturer and basically buying them wholesale. We come in and say let us install it, and then we’ll lease it to you for less than what you would pay for weekly mowing from a lawn service.”

The robot takes care of the “labor intensive, low-margin” part of the job: the thorough weekly mow. But things like weeding, edging, fertilizing, trimming — these still go to human contractors.

Mower makers like Robomow and Husqvarna see this as a potential opportunity to break into the U.S. market, which has resisted the tech for years, so they’re eager to cut a deal.

The threat that haunts Robin is growth. Expansion isn’t just a matter of adding a city to a list. Contractors need to be researched and convinced neighborhood by neighborhood. And operations and sales will become increasingly complex; the business won’t run itself, and there’s constantly a need to tweak schedules, accommodate the vagaries of weather and human frailty, and so on.

Robin is breaking even right now, but will have to sink a lot of capital into the robotic mowing program. Angel cash has taken them this far, but they’re hoping this move upmarket — and onto the radars of VCs everywhere — will make raising a bit more money possible when it becomes necessary.

Crandall was previously at Bazaarvoice and ran sales at Invodo; his co-founder, Bart Lomont, is a veteran and drone builder with experience in organizing at the city level.