Here’s a silly thing because it is the ass end of a Friday. Apple just started using the Twitter account — @apple — that they’ve had since 2011. And they’re using it to send out a tweet that promotes the Apple event next week where they’ll introduce new iPhones including a twin lens model with images that rival an SLRs in low light capability, sharpness and depth of field effects. 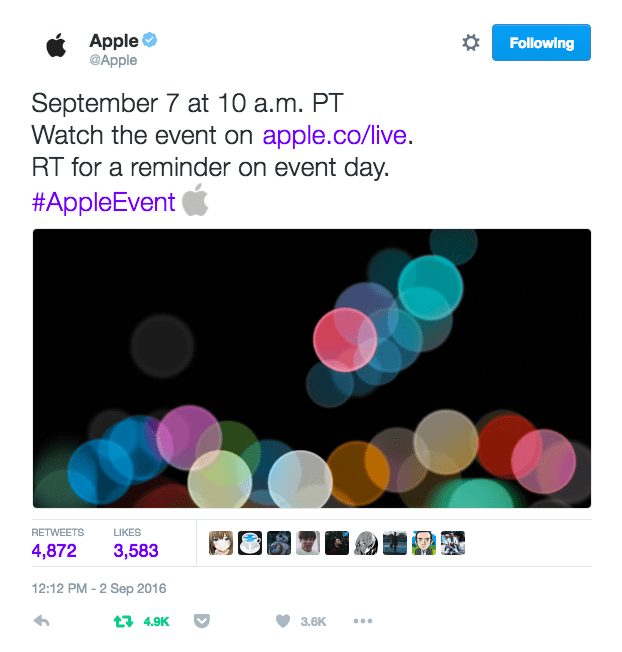 But the tweet doesn’t appear on the account’s timeline:

How? You may ask. Promoted Tweets, I may answer. The only way Apple can have a tweet floating out in the ether on Twitter without somehow attaching it to its main timeline is a specifically scoped ad buy. They can buy a tweet that exists as an island, basically.

Credit goes to Andy Baio for discovering and playing around with this procedure, which some call nullcasting or dark posting and I call Deep Subtweeting, last year. Also credit to Hardbound.co founder Nathan Bashaw who also noted the funkiness, if not the source of it.

In addition to the Promoted Tweet, Apple has spun up a custom hashtag emoji, which may have set it back a cool million or so. Anyway, if you’re interested in retweeting to get the auto responder, the direct link to the tweet is here.

Happy Friday. Also Elon Musk sent a memo to Tesla employees urging them to cut costs and ship as many cars as they can in a bid for profitability. So there is that too.

Update: The auto responder appears to be powered by IC Group

From the looks of it, @icgrouplp is working with Apple, Twitter to power bot experiences. Future Twitter product? https://t.co/PkWaKKxQlS