Grocery on-demand service HappyFresh has delivered a mixed bag of news today. The company has withdrawn from two markets in Asia and announced an undisclosed Series B funding round as it aims to become a sustainable business .

The company launched 18 months ago to become the first service of its type — the Instacart model from the U.S. — in Southeast Asia. It raised a $12 million Series A round one year, but all CEO and co-founder Markus Bihler would say of this new round is that the amount is higher. The financing is led by Samena Capital, a Dubai-based PE firm with over $1 billion under management across frontier markets in Africa, the Middle East and Asia. Previous backers Vertex Ventures and Sinar Mas Digital Ventures, who led the Series A, also took part.

On the operational front, HappyFresh has closed its business in Taiwan and the Philippines. Instead, it will “concentrate” on its three other markets: Indonesia, Malaysia and Thailand, Bihler said. These changes were communicated to staff of nearly 1,000 on Friday, and they will mean that an undisclosed number of employees will be laid off, with some relocated.

“We, of course, will provide job opportunities across the region but not everyone has the flexibility,” Bihler told TechCrunch in an interview, adding that the change “underlines our focus on sustainability and profitability across the region.”

There had been rumors that HappyFresh was trying to raise again, and not disclosing the size of the round could suggest that it isn’t as large as Bihler and his team were hoping for.

Bihler, by contrast, called the new funding “a strong vote of confidence for investors of this calibre to embrace the HappyFresh vision,” and he is particularly bullish about tapping into Samena Capital’s experience in emerging markets.

HappyFresh is designed to take weekly shopping online in Southeast Asia, a region of more than 600 million consumers where digital spending is tipped to reach $200 billion per year by 2025.

The company partners with offline retailers to sell their products through the internet and mobile apps using an on-demand model that brings delivery to your door inside one hour. Global retail giants Tesco and Carrefour are among the partners in the region. It literally sends its own personal shoppers to shop for you, with the option to trust them to pick replacements where needed or call you up to confirm switches.

Charging customers a small delivery fee — that varies across markets but, for example, it is 60THB ($2) in Bangkok, Thailand, where I am based. It also takes a fee from its retail partners for helping them sell product through its platform. Finally, it operates an analytics and data business — HappyData — through which retailers and brands can promote their products and services via promotions, sponsorships and advertising on the HappyFresh platform.

Bihler declined to discuss the specific revenue of each monetization stream, nor would he say what fraction of overall revenue each accounts for.

“All three are significant revenue streams for us,” he said.

HappyData, the analytics business, is already a profitable operation, Bihler added. Rather than spinning it into a separate business, the idea is to keep it part of the HappyFresh “ecosystem.” Its service — which include insight into product purchases, what consumers look at, and other behavioral data — is offered free to retail partners, but brands and others must pay. That business is modeled on Dunnhumby, the Tesco-owned consumer insights unit valued at more than $1 billion.

Looking to the future, Bihler said his objective is to scale all these revenue streams in the HappyFresh business and push to make the overall company profitable. He said there is a target for profitability, but declined to share it publicly. 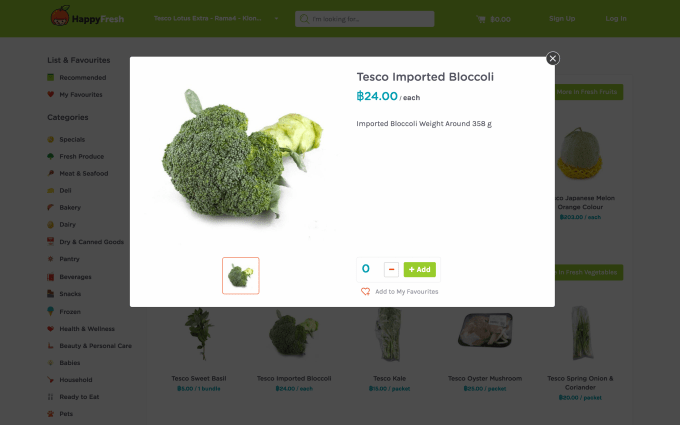 Southeast Asia has oodles of potential for online consumer businesses, but, as many have found out the hard way, the growth curve for increasing the number of internet users in the region is a long one. Lazada, an online retailer modeled on Amazon and backed by Rocket Internet, ran out of money before Alibaba invested $1 billion to take a majority share of its business earlier this year.

The fact remains that online represents less than three percent of all commerce in Southeast Asia. While that is projected to grow 10-fold over the next decade, any company building a consumer internet business has to deal with growing the pie — which can be frustratingly slow.

“We don’t see our own partners as competition” even though they run their own online stores alongside HappyFresh, Bihler said. “The biggest point is the education of the market, and the moving of consumer behavior from offline to online.”

“If we can help push the online penetration rate of our whole industry up by a couple of decimals, then we’ve done good for ourselves and our customers,” he added.