Initially available in Kuala Lumpur, Malaysia, and Jakarta, Indonesia, the startup is promising to blow the current expectation of next-day delivery — a concept that is already challenging given the complexities of the region — out of the water by delivering groceries from well-known retailers direct to customer doors within one hour.

The service offers a selection of products that you’d find in supermarkets to customers via a marketplace-style app, much like Instacart in the U.S. The app operates as you’d expect: users peruse high-street grocery stores, picking out the items and heading to the basket menu to pay. Deliveries are monitored in-app, Uber-style, and can be sent to your door or scheduled for later if you’re out and about.

HappyFresh was founded back in October, and has been available in a limited beta in Kuala Lumpur since February. The company is building out its own logistics network, using scooters to cut through the traffic in notoriously congested cities like Jakarta.

To give some context on that one-hour target. Most food retailers deliver in Southeast Asia, like McDonald’s, Pizza Hut and co, take at least half an hour to take food five minutes from their local branch to my door — while dedicated ordering services like FoodPanda require an hour to bring a Subway sandwich up the road to my flat in Bangkok. Likewise, electronics and other deliveries take one day to be processed, such are the challenges in the logistics space.

So, a third-party that brings my weekly shop to me in an hour promises to be quite the breakthrough. If HappyFresh can — literally — deliver.

“Insane pretty much describes the value proposition that we bring to the table,” HappyFresh co-founder and Executive Chairman Tim Marbach told TechCrunch in an interview. “Our goal is to have the full selection of offline stores — we see ourselves as a marketplace to connect retailers with customers.”

While it is starting off in Indonesia and Malaysia, Marbach revealed that expansions across Southeast Asia are imminent, although he declined to say which markets will be next and when.

“We intend to dominate Southeast Asia,” he said of the company’s ambition.

Plenty of startups make loud statements about conquering Southeast Asia, but so few do because talking the talk and executing are two difference concepts. There are half a billion consumers in the region, but hitting the six most significant markets — Malaysia, Singapore, Indonesia, Philippines, Thailand and Vietnam — is incredibly tough as each has its own unique requirements, language, culture and more.

However, HappyFresh has plenty of credentials on paper to take its proposition seriously. 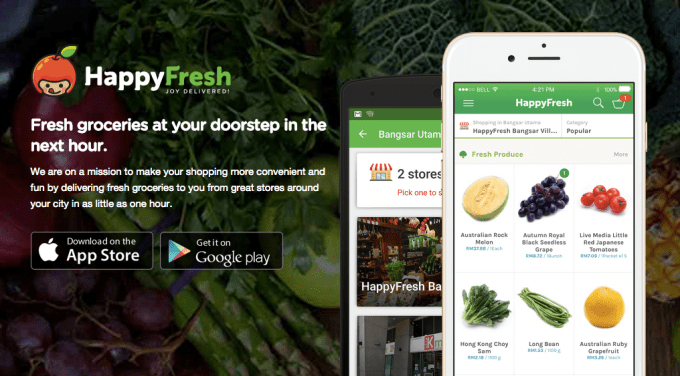 The startup is well-backed for one thing, although the details aren’t entirely clear at this point.

Marbach declined to provide further details on account of the wishes of HappyFresh’s investors, but he did claim it is “one of the largest seed stage funding in the region… [from a] combination of local VCs, international angels, and institutional capital.”

We’ve specifically heard that the round includes investment from U.S.-based backers, which is not common for Southeast Asia.

HappyFresh also has an impressive team. Its seven co-founders can count experience with Blackstone, Goldman Sachs, The Boston Consulting Group, J.P. Morgan, Rocket Internet, and Rocket Internet’s Lazada Group. Members of the team also boast an exit with Koprol, a location-based service bought by Yahoo in 2010, while Marbach himself exited his mobile coupons startup in his native Germany back in 2011, when Axel Springer paid $40 million for it.

Southeast Asia is notable for its challenges, the aforementioned culture gaps and issues with logistics and payments, but Marbach — who is also an investor, with a portfolio that includes iMoney — described the region as “Disneyland for entrepreneurs.”

His decision to move here was very deliberate. Following his exit, he flew out to Russia and then Brazil to sample life in large emerging markets, and scope out opportunities for new businesses — aged 26 then, he wasn’t ready to “retire for life,” he said. Not taken by the cold weather in Russia and relative danger in Brazil, a visit to Southeast Asia changed his mind and prompted a relocation to Malaysia when he “realized that there are so many opportunities here.”

Grocery delivery is one such void that he believes can be filled.

Contrary to popular opinion that incumbents in emerging markets are laggards, he argued that retailers in Southeast Asia “are actually fast moving.”

“They are used to seeing new things and have a fresh mind,” Marbach said, although he claimed he is unable to say which retailers that HappyFresh is working with at this point.

Billion dollar Japanese messaging company Line dipped its toes in retail earlier this year when it began offering a very limited grocery service in Thailand, a market where it claims over 30 million registered users. That service is a daily deals offering with next day delivery at his point. Line wants to do more in time, but HappyFresh promises to massively advance that concept with a service that is also favorable to retailers, rather than designed to cut them out of the loop, as a messaging app might do.

HappyFresh isn’t disclosing the business arrangements that it has with retailers, but Marbach said the principle behind the service is that ordering food via the app should not be a premium experience.

“When you order from us it will be cheaper than having to get to the store yourself,” he explained.

HappyFresh is involved in a capital-intensive business, and the company confirmed that it will need to raise more money in future to continue its expansion — much as the case is for taxi-hailing services, like Southeast Asia’s GrabTaxi, logistics firm aCommerce or Singapore’s Redmart grocery service — but the idea is to build a business with vast reach and potential, rather than race to profitability.

Indeed, the company may well expand beyond just grocery delivery over time, Marbach confirmed. At this point, he didn’t disclose any concrete plans but did say that HappyFresh is “looking into” areas where it could branch out, so feel free to add your own imagination here.

The audacity of this business marks a real line in the sand for Southeast Asia. The region is off the radar for many global companies. Amazon and eBay, for example, don’t have a local presence here — let alone a younger company like Instacart, or China’s numerous players. But over the last few years, localized solutions to problems have emerged, modifying globally proven business models to fit with local nuances and cultures.

At the same time, Rocket Internet — love it, or hate it — has provided a huge validation for the region by pouring more than $1 billion into Lazada and Zalora, its two e-commerce platforms for Southeast Asia. That has not only raised awareness of solutions with investors — local and overseas — but it has attracted vast numbers of talented people to the region (thanks to Rocket’s high staff turnover), and given existing entrepreneurs here ideas and impetus for new projects, particularly in the e-commerce, logistics and payments spaces.

I’m really bullish about Southeast Asia, and HappyFresh is another example that on-demand and commerce services are the future here, regardless of whether Amazon and other global players continue to ignore this part of the world.