Admit it: You’ve always wanted your very own Australopithecus. Unfortunately, they’re extinct — but the best known representation of our 3-million-year-old ancestor, the famous fossil Lucy, is now more accessible than ever. Researchers have released high-resolution scans of some of her bones so amateur paleontologists around the world can print their very own.

The University of Texas at Austin team got their chance to put Lucy under a CT scanner way back in 2008, when the fossil was on tour around the country. Just as many laypeople are eager to get a gawk at such an interesting part of our evolutionary history, many experts want a chance to examine the remains in person for their scholarly pursuits.

In this case, Team Lucy wanted to work out just how Lucy died. There’s significant controversy on this point, as there were no eyewitnesses, but the UT researchers have a detailed theory based on close examination of the bones and their 3D models.

In short, they argue in a paper published in Nature that the bone breakage patterns show that Lucy died after falling out of a tree, probably from 30 feet up or so. 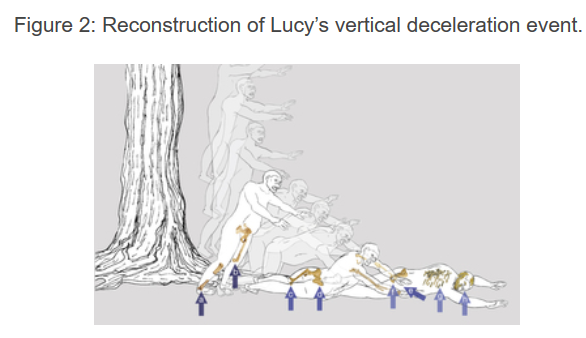 A figure from the paper graphically explains Lucy’s last moments.

Not everyone is having this explanation, though, considering Lucy is supposed to be among the first truly ground-dwelling apes. “It is therefore ironic,” writes the team with characteristic scientific dryness, “that the fossil that has been at the center of a vigorous debate about the role, if any, of arboreal locomotion in early human evolution can potentially be attributed to a fall out of a tree.”

The debate will surely go on, but while the scientific community may not agree with the study, it’s hard to deny the side benefits. After checking with the National Museum of Ethiopia, where Lucy officially resides, the high-resolution 3D models of the bones scanned are available for free download to anyone who wants them.

Although there is something to the argument that it may detract from the charm of the originals to have copies freely available, it’s surely more blessing than curse. Students from elementary to graduate school will appreciate the opportunity to handle faithful replicas and make their own observations as close to in vivo as they’re ever likely to get.