Ford is continuing to invest in tech startups, this time with an emerging market twist.

Hot on the heels of a deal with a self-driving sensor technology startup, the automotive giant has backed Zoomcar, a Zipcar-like company that operates in India. Subsidiary Ford Smart Mobility led a $24 million Series B round, with participation from returning investors Sequoia Capital, Nokia Growth Partners (NGP) and Empire Angels. The company’s valuation was not disclosed.

Four-year-old Zoomcar closed an $11 million Series B round last summer following an $8 million raise in late 2014. This new round — which had been reported in Indian press as early as July — takes it to over $46 million in VC money to date.

Zoomcar is a car rental service based on successful Western models like Zipcar, which was bought by Avis for $500 million three years ago. The startup is based in Bangalore and it currently claims to offer 2,000 cars around seven of India’s tier-one cities, with 75 percent occupancy and 1.5 million app downloads. Ford was Zoomcar’s first OEM partner, and the startup said Ford provides “most” of the vehicles on its platform.

“As Ford expands its business to be both an auto and mobility company, we are pursuing a long-term vision to develop services and solutions that make it easier for consumers to move through cities using multiple modes of transportation,” Ford Asia Pacific mobility director John Larsen said in a statement. 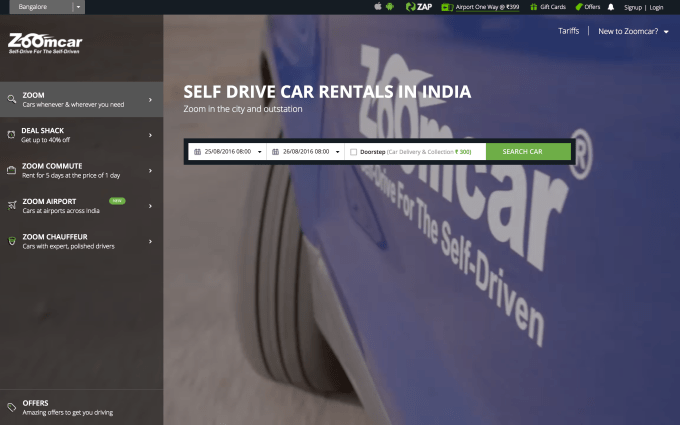 Zoomcar has major plans to grow its fleet of cars rapidly, and that centers around a marketplace launched this year that is called ZAP, or Zoomcar Associate Program in full.

That’s a hybrid model that lets car owners and Zoomcar work together to make a vehicle available for lease via Zoomcar’s platform when it isn’t being used by its owner.

It’s basically an Airbnb for car ownership — although it only applies to new purchases, as laws in India forbid the sub-rental of existing cars.

Here’s how it works: Zoomcar boosts its inventory by getting access to cars without buying the assets in full. Access isn’t 100 percent, but it could mean a car is driven when the owner is at work, on vacation or simply not using it.

On the other side of the table, the setup helps car owners get a vehicle at a much lower price. First, Zoomcar matches them to dealers, insurance companies and others involved in the buying process, including favorable rates. Once the vehicle is acquired, it joins the Zoomcar fleet and the company pays the owner money when it is used.

Zoomcar claimed that ZAP participants can expect to get around a 90 percent return on their investment in a vehicle, which is pretty significant if it pans out that way. There’s also a minimum guaranteed revenue per month and provisions to “make sure that your car is kept in top shape at all times.”

The marketplace approach blows Zoomcar’s previous asset acquisition process out of the water. Not only is it saving considering sums on spending, but it has the potential to scale its fleet very rapidly.

Indeed, Zoomcar CEO and co-founder Greg Moran told TechCrunch in an interview that he expects ZAP to account for 70 to 80 percent of all cars on the platform over the next year.

It is early days, but Moran added that ZAP could make up half of Zoomcar’s vehicles as soon as the first quarter of next year. In the longer run, he said the approach can grow its total fleet more than ten-fold to 25,000 vehicles across 25 cities by 2018.

Clearly then, beyond what Zoomcar is already doing, Ford has additional interest in the company since the ZAP program is an effective means to reaching and selling to would-be car owners in India’s billion-plus population.

Moran acknowledged that Ford is one of the many pioneering self-driving cars — which Uber is switching on this month in the U.S. — and other technologies, but he declined to say more on other ways they may work together.

“Autonomous vehicles are not something we’re looking at in the near term,” he explained. “With a lot of these newer initiatives, there is a lot of red tape for permits etc. in India. With autonomous vehicles, there will be a whole new set of regulations and we want to get more regulatory guidance before” committing to investment and spending.

“But it’s something that we obviously think about,” Moran added. “Ford was our first partner when we launched the business, and we share the same common values. They have a longer-term view on the technology, product and financing pieces.”

International expansion is another topic for the future that isn’t a priority right now.

“India is quite an ocean,” Moran said. “Although at some point in the next 24 months [expansion] is in the cards for us.”

When pushed for potential expansion markets, Moran mentioned “big markets in Africa” like Nigeria, or countries neighboring India in South Asia, as places where the company can tap into its expertise and business without language being a huge barrier.

Two years may seem like a while, but the Zoomcar CEO is confident that building a business in India stands Zoomcar in good stead even if others take first mover advantage.

“Those markets right now are really untapped,” he said. “Even if someone comes into the markets [now], we will have a huge advantage based on our business… [such as] data on users, historical driving behavior, payments and all these elements that put this whole piece together.”

More immediately, Moran is focused on growing Zoomcar’s reach in India’s biggest cities. Unlike rivals like ride-hailing service like Ola — which is closing in on 100 cities, and includes long-distance ride services — Zoomcar is deliberately moving slower with an “efficient growth” plan.

“We will continue to go much deeper,” he explained. “Others have blasted out to 100-plus cities and kept very a horizontal strategy, but with around 80 percent of revenue coming from five or six cities, it derails them from profitability.”

Zoomcar, while operating a different business model, is cash positive now, according to Moran.

Don’t expect Zoomcar’s 185 staff numbers to rise fast, either. The company is seeking “a select few” hires on its business team of 160, including a COO, but again it is a case of slow and steady wins in the race. In theory, at least.