Comcast entered the cord cutting fray last fall with the launch of its online and mobile streaming service Watchable, which offered a variety of videos from popular websites like VICE and Vox, in an effort to reach the growing number of younger subscribers opting out of paying for cable TV. However, much of its content could be found elsewhere online, and there wasn’t really a compelling reason to use the Watchable app instead. Now, the company is hoping to change that with the debut of exclusive programming, which will bring original series from select partners to Watchable’s service.

Watchable, initially, came across as more of an experiment with attracting cord cutters, rather than a serious effort. While there were over 30 content partners at launch, it didn’t make sense to tune into Watchable instead of, say, YouTube or the content partners’ own sites.

In fact, Watchable’s pitch to content partners wasn’t even about joining a hot, new streaming service, but rather the fact that it would also distribute creators’ videos to Comcast subscribers through set-top box integrations. It was promising them a larger cut of video ad revenue than on some competing services, too – 70 percent of ad revenue went to creators, Variety reported.

In addition, muddying the waters even further was the fact that Comcast was simultaneously investing in another streaming service for cord cutters: Comcast Stream.

The Watchable app, not surprisingly, hasn’t taken off. It’s unranked on App Annie’s charts, which means it’s not even in the top 1,000 in any App Store category. That’s a bomb. However, Comcast glosses over its lack of downloads by noting that Watchable mobile traffic is increasing 40 percent month-over-month, and the app sees session times of over 30 minutes, on average. 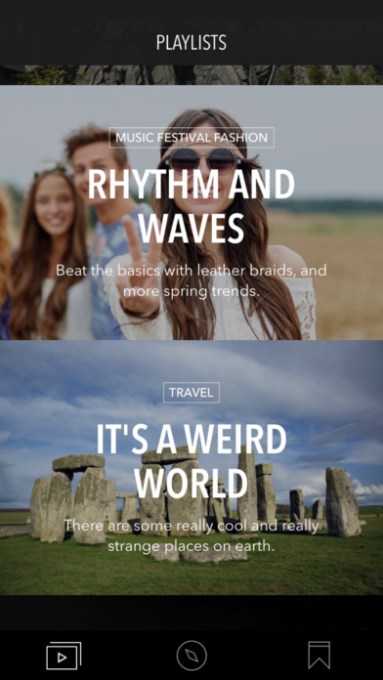 Today, Comcast is trying to give people a reason to actually use Watchable: exclusive content. As with other streaming services on the market today – from big names like Amazon and Netflix and down – access to programming you can’t see elsewhere can be a big draw, if they can land on a hit.

That’s why Comcast is now launching “Watchable Exclusives,” a collection of original series from some of its top content partners, including Refinery29, mitú and Cut.com. Later this year, it says it will expand with more original series from BuzzFeed Motion Pictures, CollegeHumor, Cut.com, POPSUGAR and Studio 71.

There are just three originals available today, however: “Ballin’ on a Budget” from Refinery29 follows comedienne and rapper Awkwafina as she demonstrates how to live the high life on a budget; “Cholos Try” from mitú, targeted at Latinos, expands on its online series of the same name and will follow 4 cholos from East L.A who immerse themselves in cultures and lifestyles across America; and “How to Human” from Cut.com, a part how-to, part scripted comedy that follows the ups and downs of a young woman’s life.

Upcoming series will include makeup and beauty tutorials, reality-style programming, a game show, and others aimed at a younger, millennial audience. (Full details on the new series are here).

The new content is live today on the Watchable iOS and Android applications, and on Comcast’s X1 set-top box.