Amazon’s same-day delivery service Prime Now, which is today available in more than a couple of dozen U.S. metros, is experimenting with another type of service that goes beyond traditional purchases: it’s offering consumers the ability to test drive cars. Specifically, Amazon has partnered with Hyundai to offer test drives of the 2017 Elantra through a new program called “Prime Now. Drive Now.”

To be clear, the program doesn’t let you order a car on-demand – it’s only providing a more convenient test drive. Instead of having to visit a dealership, Prime Now customers in select markets can go online and choose a test drive window from between 9 AM to 7 PM, in order to schedule a 45 to 60-minute test drive.

A “trained expert” will then bring the car to your location, and you go for a drive. If you want to buy the car, they’ll help you find the nearest Hyundai dealership. The only car being tested through this pilot program is the 2017 Elantra, however. And, for the time being, test drives are only happening in the car-centric L.A. market and Orange County.

The program first ran this past weekend (August 20-21) and will run again August 27-28. In other words, it’s more of a limited time promotion rather than a planned new feature for Prime Now – at least, for the present. 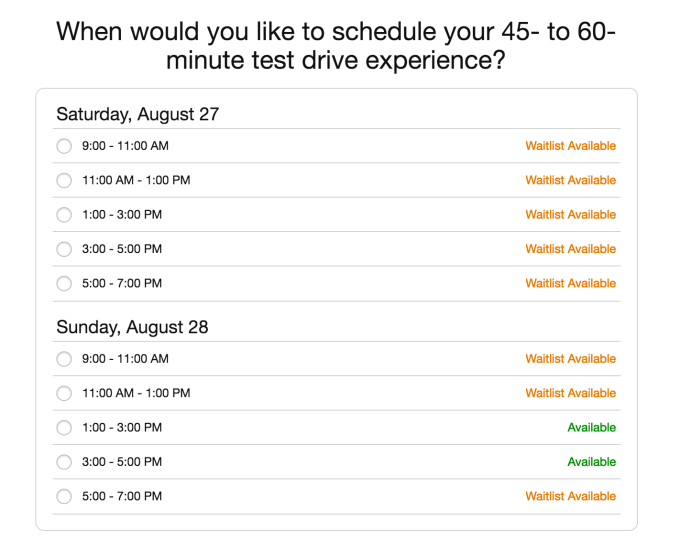 That being said, it’s not the first time that Amazon has dabbled with non-traditional deliveries via Prime Now. Originally focused on offering a more limited selection of its product SKUs – today that’s “tens of thousands” of daily essentials –  Prime Now has also expended in select markets to include things like groceries, restaurant orders, and even alcohol deliveries. But this is the first time it’s offering something you can’t actually buy and keep.

The idea for making test drives and car buying easier via technology is not novel, however. Startups like Tred offer a mobile car dealership including test drives from your home; Beepi lets you buy, sell and lease from an app, and then allows you 10 days for test drive it. Meanwhile, Carlypso’s used car marketplace brings the car you buy to you directly.

In Amazon’s case, DriveShop is managing the test drives between Prime Now consumers and Hyundai, according to information on the “Drive Now” program’s site.