Spotify’s first original videos, a music cartoon series called “Deconstructed,” may have been something of a dud, but don’t count out Spotify’s entire lineup of originals just yet: the company has now debuted its new series called “Landmark,” which starts off by chronicling the band Metallica’s rise to fame.

“Landmark – Metallica: The Early Years,” will be the first documentary to air from the series, which will also delve into other key moments in music history in future releases. Another upcoming Landmark show will feature the Beach Boys’ album “Pet Sounds,” for example.

However, in Metallica’s case, the documentary will focus on the founding of the band in 1981 through the release of its 1984 album, “Ride the Lightning.” According to the show’s description on Spotify, the story will begin with Lars Ulrich’s chance encounter with Motorhead in a London rehearsal space to “some pretty weird personal ads” and the arrival of Cliff Burton.

The four-part series will also include exclusive interviews with the band and other archival footage. The episodes themselves are not long – the first is just over 8 minutes, and the remaining videos clock in between five and six minutes, roughly.

Episode #1 was made available on YouTube yesterday, but the rest of the documentary will be available only on the mobile version of Spotify’s app.

Metallica is an interesting band not only because of their music, but because they sued Napster in 2000 for copyright infringement, taking a hard stand against file-sharing as the world entered the era of digital music. In 2012, the band joined Spotify after years of trying to keep its music off peer-to-peer sites, which became pivotal moment for both Spotify and Metallica alike.

“Landmark” should have been the first original show out of the gate on Spotify, as it better represents the streaming music platform’s larger goal with its expansion into its own video content. Something like a modern-day MTV, Spotify’s originals, announced earlier this spring, are meant to showcase top performances, pop culture, musical storytelling, and more. 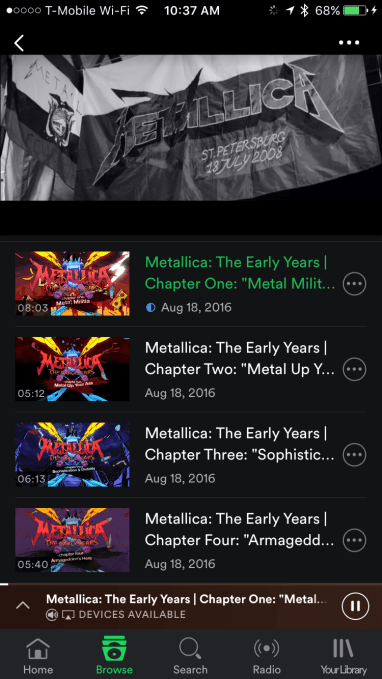 However, its first show to launch, “Deconstructed,” didn’t impress – it felt like “an animated infographic” or “an overpriced startup launch video mixed with a purposefully viral but shallow BuzzFeed clip,” wrote TechCrunch’s Josh Constine in a harsh, but fair, takedown.

Fortunately for music fans, several of the other shows sound more promising, “Landmark” included. For instance, “Life in Short” will have brief, under 2-minute episodes that are mini biographies of enigmatic musicians; “Rhymes & Misdemeanors” will investigate the biggest crimes in music history; “Generations” will pair artists from different generations; “Singles” will offer lo-fi studio recordings of artists’ biggest songs; among others.

In total, there are 12 original shows from Spotify on their way.

The move to expand into original video came a year after Spotify began including video content on its platform as a means of differentiating itself from the competition, like Pandora or SoundCloud.

But much of that previously introduced video wasn’t exclusive to Spotify. The company rolled out shows, news and clips from ABC, Adult Swim, BBC, Comedy Central, Condé Nast Entertainment, ESPN, Fusion, Maker Studios, NBCUniversal, TBS, TED and Vice News. Many of these videos can be seen elsewhere on the web, and aren’t even the sort of thing you’d think to visit a music service in order to see. Meanwhile, Spotify’s originals are pushing the service in the direction of being a music platform that does more than just offer just radio, playlists and songs-on-demand.

Of course, Spotify won’t be without its rivals on this front, either. Apple Music, most notably, is kicking off its own video initiatives as well, including with its newly acquired series Carpool Karaoke. It’s developing a scripted show with Dr. Dre.