If we’re ever to have things like smart contact lenses and permanent brain implants, one of the things we need to figure out is the power problem. Those devices need energy for collecting, processing and especially transmitting data — but that last one might not be a problem anymore, thanks to a new technique called interscatter communication.

Producing a wireless signal that’s strong enough to be detected five or 10 feet away isn’t that costly energy-wise when you’ve got a big all-day battery you can recharge easily, like in a smartphone.

But for tiny devices, especially those intended for use inside the body, power is a much more serious consideration. Their batteries are tiny and it’s not like you can just pull your pacemaker out and juice it up on your laptop. So anything that reduces power draw is welcome for the next generation of smart embedded devices. 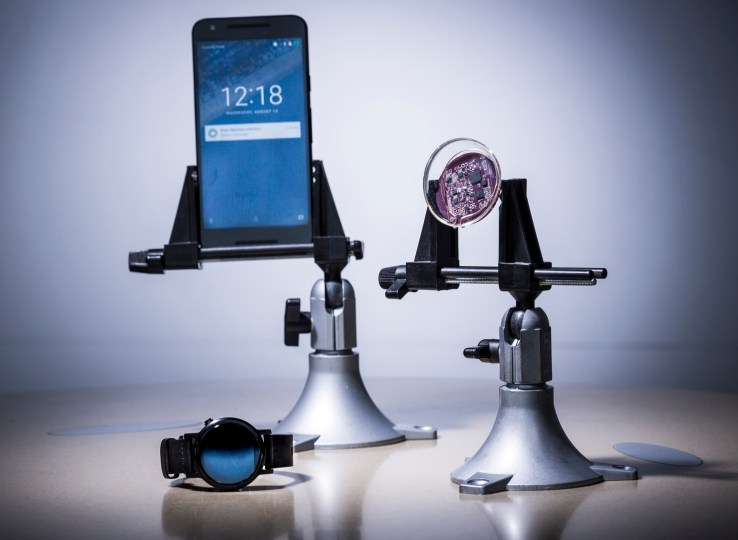 To that end, three graduate students from UW’s electrical engineering program created a technique that eliminates the necessity to produce wireless signals at all. Instead, using interscatter, the device can essentially harvest and re-deploy signals it receives.

It works like this: One device, say an earpiece, transmits a special “single-tone” signal carrying no data, in the Bluetooth frequency. The interscatter device receives this signal and allows it to bounce off its antenna — but not before it has manipulated it ever so slightly, re-encoding the blank signal as a Wi-Fi one. This altered transmission (really a sort of distorted reflection) can be picked up by a phone or laptop just like any other data over Wi-Fi.

Savings that huge could open up possibilities for lots of implanted devices, but that’s by no means the only possibility. The team has also built interscatter into some prototype credit cards that recycle signals to communicate with a payment system or each other.

One of the next steps in the project will be to miniaturize the technology further; so far, it’s been built on bulky FPGA boards, but once the design is finalized it could be shrunk down onto an ordinary integrated circuit board. But because the signals are standard, the other devices can be anything, from Apple Watches to Samsung Galaxy phones.

The paper describing interscatter is by Vikram Iyer, Vamsi Talla, Bryce Kellogg and their professors, Shyamnath Gollakota and Joshua Smith; it will be presented August 22 at the SIGCOMM conference in Brazil.