Marijuana use is a bit of a tricky subject in the United States.

While public opinion on the matter may be shifting toward being more open to legalization — a YouGov poll released earlier this month showed that 55 percent of those surveyed supported legalizing marijuana, with more Republicans supporting legalization than not — only 25 states and Washington, D.C. have legalized medical or recreational marijuana use.

Navigating this challenging landscape is Disrupt SF 2015 alum Leaf, which announced last week it had raised a $2 million seed round ahead of a new product launch coming later this year. The round was led by CJV Capital, and included Phyto Partners, Advanced Nutrients, Michael Cohn, Ben Biron and Gregg Weiss.

Along with the funding news, Leaf revealed the final version of the Leaf grow system, an automated device that helps consumers of all skill levels grow their own medical marijuana from the comfort of their home.

Leaf is the size of a miniature refrigerator, at 24 inches deep, 24 inches wide and 60 inches tall, and features precise temperature and humidity control, automatic nutrient dosing and a drying mode that helps get your plant consumption-ready — and it’s all controlled through a smartphone app with easy step by step video instructions to help even the most novice of growers.

In addition, Leaf features a smell-preventing carbon fiber to minimize or even eliminate odors, an advanced BIOS LED light system and an optional water hookup for automatic water changes.

The Leaf grow system will be available to purchase in the fall. Company founder and CEO Yoni Ofir tells TechCrunch that while he’s not ready to announce a final price point just yet, the Leaf should pay for itself after growing just two batches of medical cannabis. They’re offering a “heavy discount” to folks who sign up for the company’s mailing list, and plan to open up preorders and begin shipping in the fall. 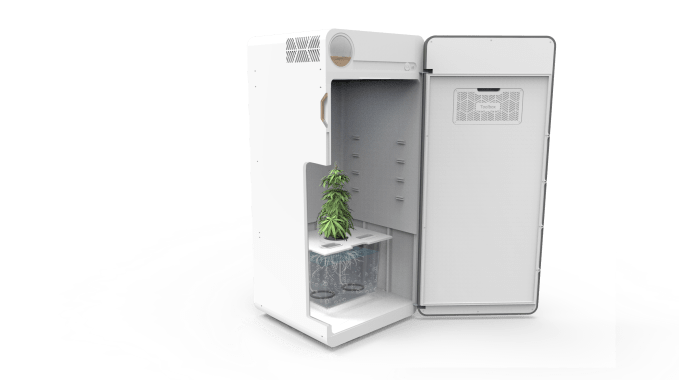 We’re thrilled to share another Startup Battlefield success story with the launch of Leaf, and can’t wait to see what the next batch of Battlefield participants has in store for us at Disrupt SF 2016, which takes place September 12-14 at San Francisco’s Pier 48.