The Apple App Store shows no signs of slowing down, despite the fact that people seem to limit the number of apps they use regularly to just a small handful. But developers keep building, so the apps keep coming. According to new analysis out this morning from app intelligence firm Sensor Tower, the App Store is expected to more than double its size over the next four years, reaching 5 million apps by the year 2020.

Sensor Tower based its projections on historical data from the App Store from its 2008 launch through the present – specifically, the number of worldwide active apps at the end of each period, not the total number of those released. 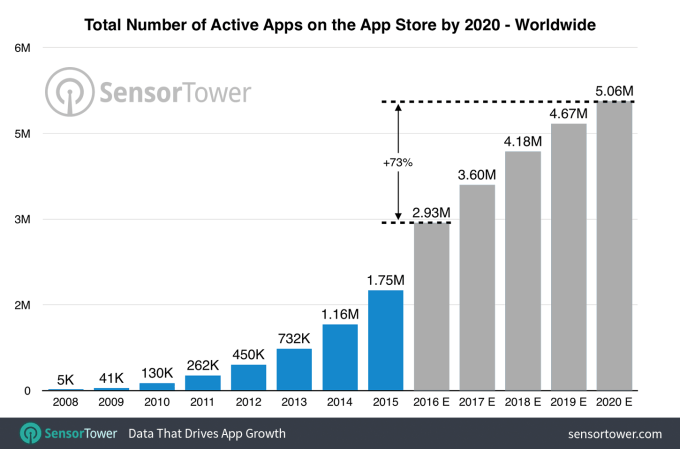 New games fuel the App Store’s growth, because of both their popularity and because game makers have to release new titles often to keep users engaged. Games, after all, aren’t generally played indefinitely, though some titles have certainly proved to have longer staying power – like Candy Crush, Clash of Clans, or – in all likelihood – Pokémon Go. 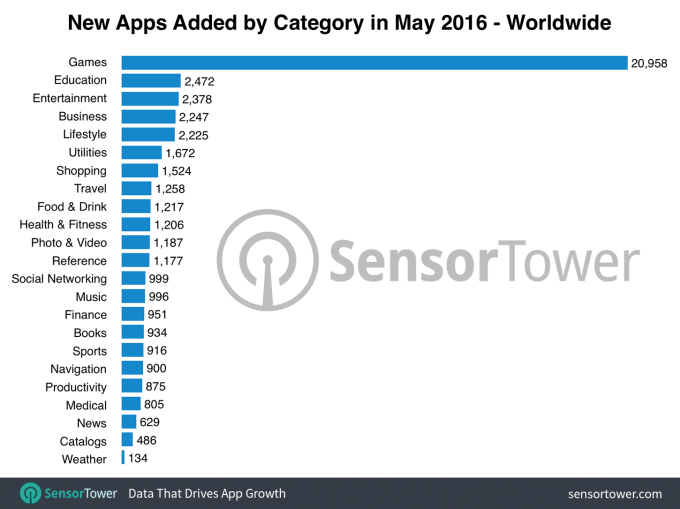 However, with the App Store’s continued growth, the challenge for Apple is to make sure new apps can be found.

The company has finally begun to address this problem in earnest, through a host of changes rolling out to the App Store in the weeks ahead. For starters, Apple is implementing ads in its App Store search, which will allow developers to bid on the top slot against a particular app name or keyword. Search ads will become a critical way for apps to be discovered in a growing storefront, especially given that Apple says over 65 percent of apps today are downloaded from a search query.

Apple will also be revamping the storefront itself by personalizing it to each user individually. This fall, its “Featured” section will no longer recommend apps you already have installed – only new ones. It’s also bringing back the Categories tab and introducing a new way to share apps with friends, via a 3D Touch shortcut.

Still, even if app discovery is improved, a larger challenge is getting people to actually download and use the apps they have installed. Previous analysis from comScore indicated that people download so few new apps per month, that it averages out to zero. However, app marketing firm Tune recently contested that study, saying that the real number is closer to 1.5 apps per month.

75 percent of U.S. users download at least one app monthly, it said, and teens download 6.3 apps per month. Its figures were based on measured installs from nearly 50 million Americans, it said.

Still, when it comes to using apps, people tend to stick with those from the big companies, not the indie developers.

For example, according to SurveyMonkey, the top five most used apps in the first part of this year were Facebook, YouTube, Messenger, Google Maps and Play Store. The most downloaded were Messenger, Snapchat, Instagram and the game Color Switch. Plus, 40 percent of the most used apps are those that were preloaded on the device. That means developers aren’t just competing with other apps on the store – the number that will reach 5 million in a few years’ time – but with those already installed on your phone from day one.