Disney today is wading into the mobile messaging market with a new chat application called Disney Mix, aimed at kids, tweens and families. While the app will compete to some extent with popular messaging clients like WhatsApp, Facebook Messenger, Snapchat and others, the goal with Disney Mix is to provide a safer alternative that’s built with the needs of kids in mind. That means the app isn’t just about chatting — it’s also about playing games, making memes, sharing stickers and more, says Disney.

The company notes that it already has over a decade of experience when it comes to building online communities for children, including things like Club Penguin, MarvelKids and other virtual worlds.

To create Disney Mix, it used the learnings from Club Penguin as a starting point, then built out new tools, moderation capabilities and educational resources that are specific to Disney Mix.

Of course, given its target demographic, Disney Mix adheres to the U.S. Children’s Online Privacy Protection Act (COPPA), which restricts how companies operating services directed to children are allowed to collect and use personal information. 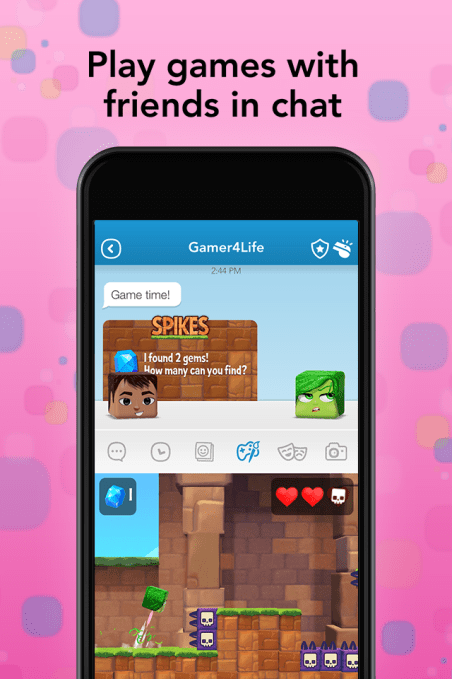 When users sign up for the app, they agree to a series of community rules, including “stay safe,” respect others” and “keep it clean.” The first refers to the fact that you don’t give out personal information to people you don’t know, while the others speak to the type of content that can be shared. That is, there’s to be no bullying and no foul language.

There are moderation capabilities in the app as well, that will see members either temporarily and permanently banned from Disney Mix for breaking any of the rules, says Disney.

This is handled by a moderation team that can also be summoned at any time by clicking the “Whistle” icon in the top of the chat thread. This reports the conversation to the mod team to handle. Plus, Disney Mix users can remove people from their friends list by swiping left on their name.

The company is also encouraging parents to sit down with kids to discuss the rules of the app, before signing up their under 13-year-old kids to participate.

While the app is rated as “4+” on the App Store, the concept will likely appeal the most to slightly older kids, up to pre-teens.

In Disney Mix, friends can chat with each other, which includes sending stickers of favorite Disney characters, like Flash from Zootopia, Hank from Finding Dory and Jenny from Adventures in Babysitting, for example. Additional content in the app comes from Frozen, Monsters University, Toy Story, K.C. Undercover, Descendants and other Disney franchises.

Beyond chatting with friends and family, kids can also add Disney accounts to their friends list, like Disney Channel, Disney XD and Disney Movies. These accounts will then message them with new photos and videos periodically, along with other news.

Perhaps the biggest differentiator between Disney Mix and a straightforward messaging client is that it has a variety of interactive games built-in, like Spikes, Elsa’s Winter Waltz and Cards of Doom. Friends can play these games with each other inside their chat screen.

When getting started, users set up a personalized avatar that they customize by selecting the hair style, facial features, accessories and more. It’s not all that different from Nintendo’s Miitomo, except for the fact that their avatar is just the face, not a whole body.

Disney says that an upcoming release of the app will introduce support for more features, including photo and video sharing — again, with parental involvement kept in mind, the company claims.

Disney Mix is a free download on iOS and Android.