Hot off the heels of its acquisition of Yahoo last week for $4.8 billion, today Verizon announced another huge purchase: it’s buying Fleetmatics, a telematics company based out of Dublin, Ireland, for $2.4 billion in cash, to build out the products that it offers to enterprises in the areas of logistics and workforces that are on the move.

The deal will make Fleetmatics a part of Verizon Telematics, a subsidiary of the telco that focuses on fleet management, mobile workforce solutions and IoT. It’s part of a short spate of acquisitions that Verizon has been making lately to expand those operations: about six weeks ago, Verizon Telematics announced that it would acquire Telogis (financial terms undisclosed).

More generally, the acquisition of Fleetmatics points to ways that Verizon is continuing to use its balance sheet to finance investments into newer areas to offset continuing declines in its core, legacy business of basic phone services. As that market has become increasingly commoditized and people turn to other, digitised forms of communication away from traditional voice services, Verizon is hoping to invest into newer areas to move beyond “dumb pipe” status to keep its margins up, and revenues growing.

While its acquisition of AOL (and now Yahoo) will help Verizon scale up its media, advertising and content operations, Fleetmatics is pointing straight to Verizon’s ambitions in enterprise services, and specifically enterprise mobility.

The wider context of that market is interesting. 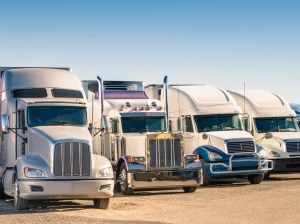 On one hand, there are traditional customers for these services: companies that employ fleets of workers who are constantly on the move as part of the companies’ wider operations (Fleetmatics’ existing customers include businesses like Time Warner Cable and DirecTV).

The boom in smartphone services and enterprise mobility has given this customer base a wider range of tools to do these jobs better, and Verizon wants to be their go-to for purchasing them.

On the other, there is a growing new market, too: companies like Uber have been investing a lot to build out a logistics business that goes beyond the transportation of people, and there are a number of other startups (and much larger players, like Amazon) that are hoping to disrupt more traditional providers of services to move things from points A to B. Verizon is buying into the technology used for these services as well, as another way to increase the revenues it makes from enterprises, beyond basic network connectivity.

Fleetmatics is an SaaS-based provider of GPS and other services to fleets and companies with mobile workforces. It has 37,000 customers, 737,000 subscribers and 1,200 employees. The services that it offers include location services, driver and car security services, fuel tracking, dispatching and billing/invoice services.

The company has been publicly traded since 2012 and the deal is equivalent to $60 per share in cash, Verizon said. When it was private, Fleetmatics had raised over $93 million from investors like IVP.

Verizon Telematics CEO Andres Irlando says the deal was done to build up its telematics services for small and medium businesses.

“Fleetmatics is a market leader in North America — and increasingly internationally — and they’ve developed a wide-range of compelling SaaS-based products and solutions for small- and medium-sized businesses,” he said in a statement. We will be talking with him later and will ask if there are more deals of this kind to come.

“Verizon and Fleetmatics share a vision that the SaaS-based fleet management solution market is extraordinarily large, lightly penetrated, global and fragmented which can best be attacked together with a world class product offering and the largest distribution channel in the industry,” said Jim Travers, Chairman and CEO of Fleetmatics, in a statement.

Verizon Telematics is a subsidiary of the company that also owns AOL (which owns TechCrunch). It is active in more than 40 markets globally with a mix of software and hardware solutions.