A drone is a great eye in the sky, but if you want richer data than what its cameras show — for example, detailed 3D maps — you might be looking at a few hours of processing time. That is, unless your HQ is rocking Lockheed Martin’s cool-sounding Hydra Fusion tools, which can build that 3D map in real time from just video.

It’s an impressive feat of photogrammetry — which, if you didn’t know, is the technique of minutely tracking features in a series of images to determine their absolute sizes and positions. Computational photogrammetry is useful, and has been applied to all manner of scientific and military pursuits — recently, it has helped reconstruct and map historical sites with impressive accuracy. 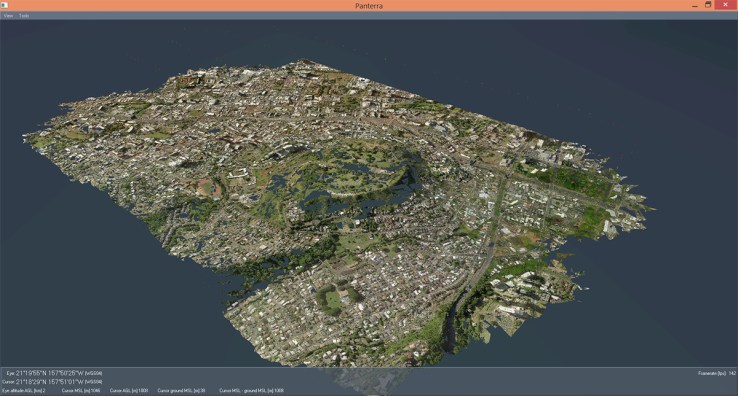 An example of Lockheed’s photogrammetry in action — a 3D map of Oahu.

But it’s also a computationally demanding process: since each pixel must be scrutinized with care, analyzing hours of HD video was best left to the supercomputers at home. Fortunately, modern GPUs are basically sandwich-sized supercomputers, so it can now be done in a high-end laptop watching the drone’s feed.

The result isn’t anything you’d want to put on your wall — think early Apple Maps — but it’s good enough that a drone could, for instance, make a second pass at low altitude, following the curves of the landscape and avoiding buildings it didn’t know were there the first time. It would also be useful for quick and dirty reconnaissance — perhaps sending the 3D map back to the special ops team’s new iPhones.

Lockheed recommends a powerful but otherwise ordinary laptop to run the software suite, which costs $15,000 to start; originally in this article I had suggested that the drone itself would also be customized for Hydra Fusion purposes, but that’s not the case.