The last of 4,450 triangular panels was installed to complete the world’s largest single-aperture radio telescope, located in China’s Guizhou Province. A monument of China’s dedication to the field of astronomy, the telescope will be used to study pulsars and search for alien life in the universe.

The 500-meter Aperture Spherical Telescope (FAST) is a $185 million project that began in 2011 and is designed to listen for radio waves up to 1,000 light-years away and search for intelligent extraterrestrial life. FAST will overtake the 305-meter diameter Arecibo Observatory in Puerto Rico as the largest telescope of its kind.

In radio astronomy, the larger the dish size, the better. A larger aperture gives scientists a more sensitive ear on the universe, enabling them to detect weaker radio signals at farther distances.

By measuring radio waves, astronomers can study phenomena like pulsars, black holes, and quasars – all of which naturally emit radio waves.

Pulsars are of particular interest to the FAST team. Yue Youling, an associate researcher for the National Astronomical Observatories, told China’s CCTV that the astronomy community has discovered 2,500 pulsars to date, but with FAST they hope to double that number.

“We have found more than 2,500 pulsars. We hope we can find at least double that number with this gigantic radio telescope. For example, very small or very big pulsars. Understanding the fundamental physics of pulsars will help us understand the Big Bang.” Yue Youling, associate researcher at the National Astronomical Observatories

But perhaps even more interesting is the potential for unnatural sources of radio waves, like technology created by aliens. Searching for radio wave-emitting technology is the most common way to search for extraterrestrial intelligent life in the universe, a field of science known as SETI.

China isn’t the only one ramping up their SETI research. Last year, billionaire investor Yuri Milner committed $100 million to SETI efforts through the project Breakthrough Listen. The money is distributed to programs around the world already dedicated to SETI efforts, but require money to reserve telescope time to listen for radio signals.

We may not know what form other intelligent life would take on other worlds, but a common strategy is to search for life that would fit our definition of “intelligent.” For humans, intelligent life requires the ability to create technology, and much of our technology emit radio waves out into space, waiting to be detected by other civilizations.

While most of these technologies don’t intentionally send out radio waves into space, they do bounce around, can’t be contained within the atmosphere, and ultimately end up flying out into the universe at the speed of light.

In fact, humans have been “leaking” radio waves from our planet and into the cosmos for over 80 years. If an alien civilization within 1,000-light years had their version of FAST pointing toward Earth, they’d likely be able to detect evidence of an intelligent civilization.

It’s precisely because our technology creates radio waves that 9,000 Chinese residents had to be evacuated from the Guizhou Province area to create a radio-quiet zone for the telescope. All families within a 3.1 mile radius of FAST had to be relocated in order to avoid terrestrial electromagnetic wave interference with the telescope.

Because commonly used technologies such as cellphones and garage doors operate using radio-waves, mandated radio-quiet zones are common in areas with radio-telescopes. This prevents terrestrial electromagnetic signals from interfering with signals from outer space collected onto a radio telescope dish. 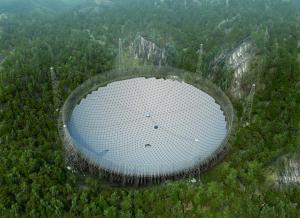 With FAST, China has proven that they are invested in becoming a world leader in radio astronomy and the search for alien life.

Now that the final FAST piece is in place, astronomers will work to debug the proper configuration of the telescope. One of the challenges ahead will include the precise positioning of the receiver that hangs above the dish, collecting signals at a focal point.

According to CCTV, the FAST team plans for the telescope to be completed and ready for operational testing in September.