Over 9,000 Chinese residents will be evacuated from their homes in order to create a radio-quiet zone for the world’s largest telescope. The telescope, known as the Five-hundred-meter Aperture Spherical Telescope (FAST), will listen for radio waves in the universe, a common strategy used by scientists to search for intelligent extraterrestrial life.

Families in the Guizhou Province living within a 3.1-mile radius of the telescope will, controversially, be paid the equivalent of $1,837 to relocate. The justification for the evacuation is to remove any source of terrestrial radio signals that might interfere with FAST operations.

Common technologies like cellphones, WiFi service and garage door openers operate using electromagnetic waves, which could make the process of “listening” for faint radio waves elsewhere in the universe difficult.

Mandated radio-quiet zones are common in locations with sophisticated radio telescopes. In the United States, there is a 13,000-square-mile National Radio Quiet Zone in the eastern half of West Virginia that exists to avoid interference with the Green Bank radio telescope. 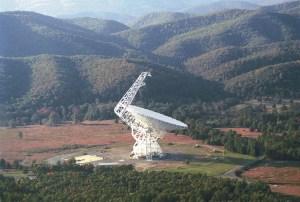 Astronomers use radio telescopes to listen for radio waves in the universe and work to determine the source of those emissions.

Sources of radio waves could be natural (pulsars, quasars and black holes all emit radio waves), or perhaps more interestingly, they could come from technology developed by aliens. Because humans created technology that emit radio waves, scientists believe that radio waves may be an indicator for intelligent life on another planet.

Currently, the largest operational radio telescope is the 305-meter-diameter Arecibo Observatory in Puerto Rico. In addition to searching for intelligent extraterrestrial life, the Arecibo Observatory has been used measure the distances and masses of galaxies. It’s also responsible for discovering the fastest spinning known pulsar. 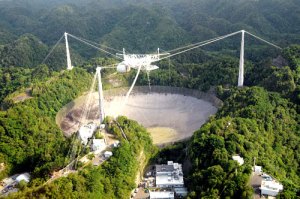 China is investing $184 million to move ahead of Arecibo and take the title of world’s largest telescope. FAST will have a considerably larger aperture at 500 meters in diameter.

Li Di, a chief scientist from the National Astronomical Observatories under the Chinese Academy of Sciences, told China Daily that the dish is so large that “if you fill it with wine, every one of the world’s seven billion people could get a share of about five bottles.”

For radio astronomy, the size of the dish matters because it allows scientists to have a larger, more sensitive “ear” on the vast universe. “With a larger signal receiving area and more flexibility, FAST will be able to scan two times more sky area than Arecibo, with three to five times higher sensitivity,” Li said.

FAST isn’t the only ambitious space project that China has invested in lately. Back in 2011, China launched the Tiangong 1 space station and became the third nation to accomplish this feat.

In January, China landed a rover on the moon and released the first high-definition true color photos of the lunar surface. With a follow-up mission scheduled to launch in 2018, China also plans to become the first nation to land a probe on the far side of the moon .

On the heels of the success of their lunar missions, there have been reports that China plans to send humans to the moon. If successful, they would become the first nation to step foot on the moon since the Apollo days.

With impressive strides in telescope technology, human-rated space exploration and successful lunar landings, it’s clear that China is serious about becoming a world leader in the space industry.

The construction of the FAST telescope began back in 2009 and is nearly complete today. Panel instillation for the 500-meter dish is scheduled to be finished by June of this year. Afterward, the FAST team will perform tests on the completed system and have the world’s largest telescope operational by September.