Back in March, we reported how Amazon was poised to up its stakes in the educational publishing market with the launch of a free platform called Inspire for teachers and others to post and share education resources online. Today, the company has confirmed it is doing just that. It has announced Amazon Inspire, an open education resources (OER) platform for teachers to source free learning materials for students from kindergarten to twelfth grade, starting first as a beta in the U.S.

Designed to look and operate much like Amazon’s well-known flagship site — but without the e-commerce back-end — Inspire lets users sort content by relevance, user ratings and popularity, along with several criteria pertaining specifically to the materials at hand (level, skill, etc.).

The content is a mix of “crowdsourced” resources from teachers and other educators — uploaded via an interface that is not unlike Amazon’s self-publishing platform; and primary content posted by third parties like the Folger Shakespeare Library (which is initially adding in 100 plays and related lessons and teaching modules) and the Newseum in Washington, DC. 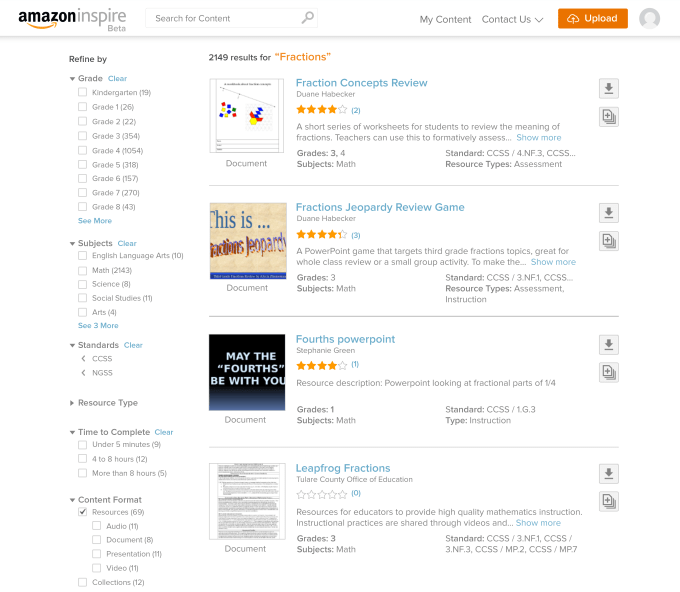 The third-party contributions could be helpful in filling out the platform if educators are slower to contribute, although Rohit Agarwal, who is the GM of Amazon K-12 Education, said so far that has not been the case. “Our early partnerships indicate that educators are more than happy to contribute content,” he told TechCrunch. “Entire districts and states are contributing to Inspire, whether they are creating or curating materials.”

He said the impetus (inspiration, even) for Inspire is the fact that educators are looking for more places to source learning materials, and potentially share some of their own. “There are more than 13,000 school districts in the U.S., and when we’ve talked to them, one thing we heard over and over again is that they have created resources or they have gone out and found that others have created them,” he said, but discovering them can be a fragmented process, “through sites and blogs.”

Amazon estimates that teachers spend around 12 hours a week looking for course materials, and so it’s about tapping into that as much as it is reducing the time. “If we could enable every teacher to contribute resources or help discover them, we could collectively raise access for the 3 million-plus teachers out there,” he said.

Amazon Inspire puts Amazon more squarely into competition against the likes of Google and Apple, which are also working on ways to use their platforms and devices to target the education sector. This is also an area that Amazon has been eyeing for while now: the company acquired TenMarks, an online math education startup, in 2013; continued to offer TenMarks’ products; and then joined the U.S. government’s Open Education initiative in 2015. The TenMarks team is leading the charge on Inspire, and Agarwal had been the CEO of the startup.

Amazon does not earn an income directly from Inspire, where there is no fee to join and no cost to use the materials on the platform. But the service will bolster several products that are key and strategic for Amazon’s business.

These include Whispercast for managing e-books, textbooks and educational apps (Whispercast had a big education-focused upgrade in 2015); AWS access to schools, students and teachers; Kindle direct publishing for education; “School Lists” and Amazon Business to buy supplies; and of course physical products like the Kindle e-reader and the Fire tablet.

Adding Inspire into that mix will help educators look to the platform as a one-stop shop of sorts for all of their online educational needs. And while having it be free of charge on one hand is in keeping with the bigger belief that public educational resources should not go the way of profit-minded big business, some have questioned whether a profit-focused company like Amazon is the best choice to control such a platform, and what its motives might really be here.

“Textbooks cost too much, and everyone knows it,” writes Audrey Watters (whose Tweet about the Amazon Education wait list was what first caught my attention back in March). “But that inflated price tag is just one of the problems that OER purports to solve.” (She notes ‘the ability to retain, reuse, revise, remix, and redistribute work’ as key aims.) “It remains to be seen if Amazon Inspire will support these activities or if the ‘problem’ that Amazon really seeks to solve here is a stronger foothold in the education market.”

On top of this, Inspire being free will also make it that much more alluring and easy to use compared to other platforms that might require payments.

From around the time that we first published our report on Inspire in March until now, Amazon has been quietly (but not secretly) adding people to the community on an invitation-only basis. If you are involved education communities on sites like Twitter, you may have seen some people Tweeting about Inspire as a result.

As a result, the program is launching with a sizeable number of users already. Although Amazon (being Amazon) declined to give specific user numbers, it says that the states of Indiana, Maryland, Massachusetts and Vermont have endorsed the program, along with school districts in Visalia, CA; Mineola, NY; Pittsburgh, Pennsylvania; El Cajon, California; Missouri; Nashville and Tullahoma City, Tennessee; and Virginia Beach.

The idea is that by launching Inspire now, as school breaks out for the summer — and specifically at the ISTE educators’ conference in Denver — the program will grow its ranks, and content trove, by autumn when school resumes. Folger alone plans to add 2,000 more pieces of content by that time.