Artists beware! AI is coming for your paintbrush too… A new iOS app, called Prisma, is using deep learning algorithms to turn smartphone photos into stylized artworks based on different artwork/graphical styles.

Snap or choose your photo, select an ‘art filter’ to be applied and then wait as the app works its algorithmic magic — returning your stylized image in a matter of seconds, along with options to share it to your social networks.

So if you’ve ever wanted your bedroom to resemble a rotoscope animation, or your selfie to have shades of manga, or your hopeless sketching skills not to hold back your yearning to create a web comic then Prisma is definitely the app for you… 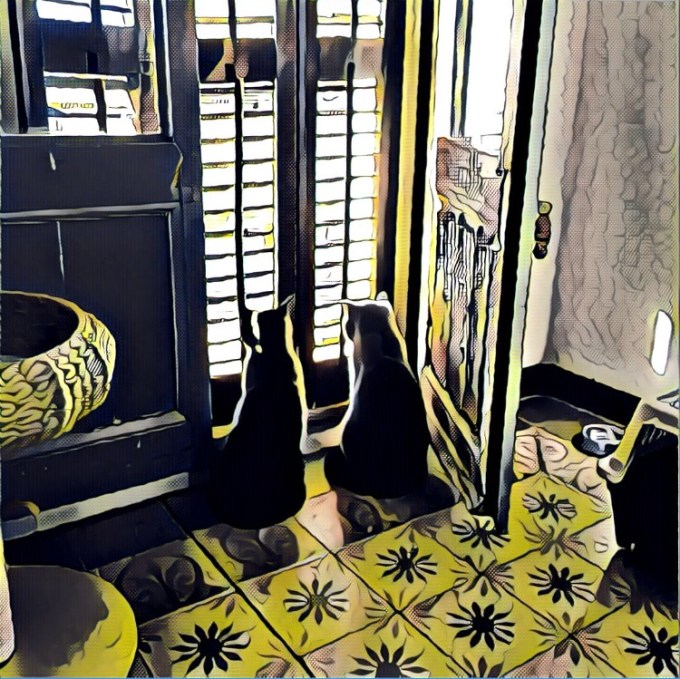 Day 4,632 of the incarceration and the cats were still plotting escape…

Prisma was launched only last week but has already garnered some 1.6 million downloads, CEO and co-founder Alexey Moiseenkov tells TechCrunch, on the phone from Moscow where the team is currently based.

The key to this early growth is clearly the app’s prominently placed social share function, which prompts users to post to Instagram as soon as they receive their processed shot.

And just this week the Facebook-owned photo-sharing behemoth revealed it had more than doubled its monthly active users over the past two years — reaching a whopping 500 million MAUs. So that’s a whole lot of selfies, outfits, lunches and cute pet shots being shared on Instagram day to day. Indeed, some 95 million photos and videos are shared on the platform on the average day.

The size of Instagram’s network is obviously creating a massive pull for fresh content. A pull that Prisma has evidently been able to tap into by offering a fresh set of filters for the hungry Insta-hoards. Prisma-using Instagram users have apparently been badging their art filtered shots with a #Prisma hashtag.

“A lot of people share photos with a hashtag. I don’t know how they find our hashtag — it’s magic I think,” jokes Moiseenkov. “For one day, the first day of launch, we create about 30,000 photos in Instagram. And it was like in a boom! And after this day the hashtag was ours.”

Prisma is offering around 20 art filters inside the app at this point, with some of the art/graphical starting points including The Scream by Edvard Munch, Go for Baroque by Roy Lichtenstein, a DC comic graphic plus abstract artworks like Transverse Line by Wassily Kandinsky. 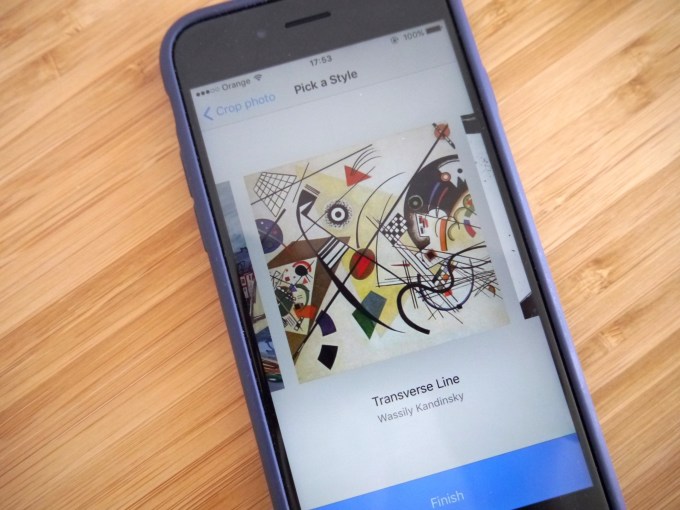 More filter options are being added all the time, with Moiseenkov saying the intention is to add two more per day at this point.

“After a month we will have about 40 styles,” he says.

The aim, presumably, is to try to avoid its stylized looks feeling stale. Novelty, after all, can lose its sheen of exciting newness almost as quickly as it grabbed people’s attention in the first place. But Prisma is very much in the honeymoon phrase right now.

While you can’t see the real-time effect of a Prisma filter, given you have to wait a short while for each shot to be processed, it’s quick enough that it does not feel arduous. Although it can also be very addictive as you end up trying more and more filters on the same photo just to see what they’re going to look like. Which may not scale so well once there are 40 options in the app.

Results will vary depending on your subject matter and lighting conditions, of course, with certain filters producing better results than others for each shot. But in my experience testing the app it rarely returned a result that looked like an artwork gone wrong (darker lighting conditions did sometimes confuse some of the filters).

Most of the time the processed imagery comes back looking impressively pro. Or moodily atmospheric at very least. And the processing time was almost always never more than a few seconds. Albeit if they continue to scale up their user-base they’ll need to beef up their servers to keep up.

All processing is done in the cloud on the team’s servers, rather than on the device. But Moiseenkov notes they are not retaining or parsing users’ original photos.

“We are not storing the [original] photos. We don’t know who sent photos, we don’t know the photo itself because it’s in a non-readable format for us. We only store for result for some time because if the network is very bad we want to reconnect and give the result to the phone,” he says.

In terms of the core tech, Moiseenkov says the team is using neural network/deep learning algorithms to process the photos.

“On the server we have something like three neural networks for today. And each perform different task. It’s based on something like extract the style from the artwork and apply to the photo and some tricks to speed up the process.”

Neural networks are necessary here because Prisma’s art filters are not actually filters, says Moiseenkov, but rather the imagery is being created from a blank canvas — using the two data inputs to generate a final image.

“We’re not just overlaying like an Instagram filter. We create the photo from scratch. So there is no photo, we took your photo, then perform some operations and give a new photo to you. So deep learning is like an artist, something like that.”

The original idea for the app came after Moiseenkov saw a similar algorithm online that could process photos in the style of artworks. The problem was it was “very, very slow”.

“It took about 10 minutes or even one hour,” he says. “But when I am on my mobile I want the result now. I don’t want to wait such a long time. And I think I can improve it.

“For about two months we were just polishing the idea of math, and then from the centre of April we just for two months create the whole production code.”

They launched the app in six countries initially. It’s now in about 25 to 30 countries, and is getting around 300,000 installs across 10 of those markets per day. Its made the biggest splash in Russia so far, as you’d expect given the team hails from there — although they are planning to relocate to San Francisco to keep building Prisma. 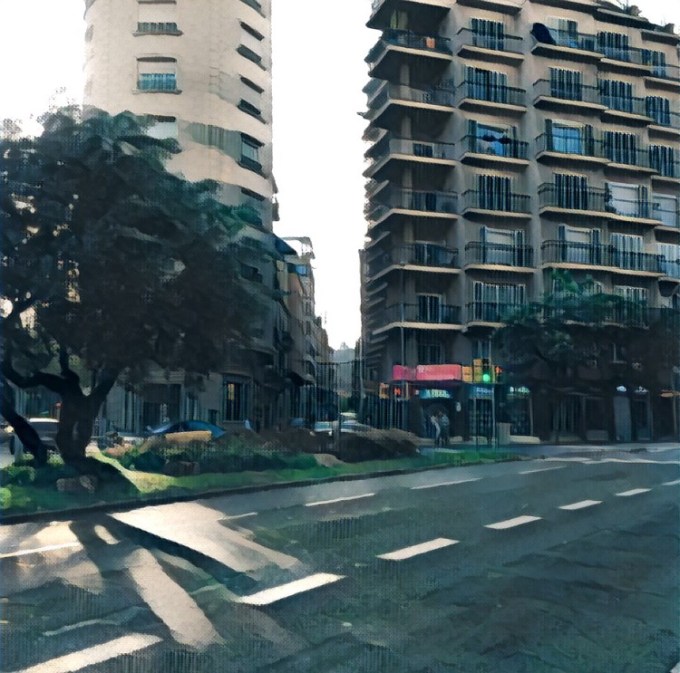 Additional features coming to the app in the short term will include it automatically suggesting the best filters for a particular shot, based on the objects in the image. Which will certainly be one way to better navigate having as many as 40 filters to choose from.

They also have plans for video, with Moiseenkov saying their processing technique can still work quickly enough for a mobile video scenario.

“Photos is only the start. We plan to add something like the Boomerang app from Instagram. Like short cycles. We plan to add them in the near future — I think in July. And some sort of very clever filters where the quality will be superb,” he adds.

They are also intending to work on more features to boost user engagement, although the team has no illusions about trying to build out their own network/platform off of a piece of cool tech.

Prisma processing is a feature doing well right now by feeding onto other social platforms with a big need for image processing. So it seems like the sort of tech that could generate an acquisition approach for the team down the line, even if mostly as a talent aqui-hire.

“There are a lot of platforms and we don’t need any other social networks for today,” agrees Moiseenkov, adding: “It’s hard for a simple app [to be sustainable on its own] and I think part of our success is its simplicity — it’s just take photo, choose filter and the result. And I think it’s a great way for user to get the result and share your artwork.

“Before our app you needed some sort of time like one hour in Photoshop, or two hours in some website or service. And for now you’re just going outside in a park with your friends and just create something sort of like art and it’s amazing.” 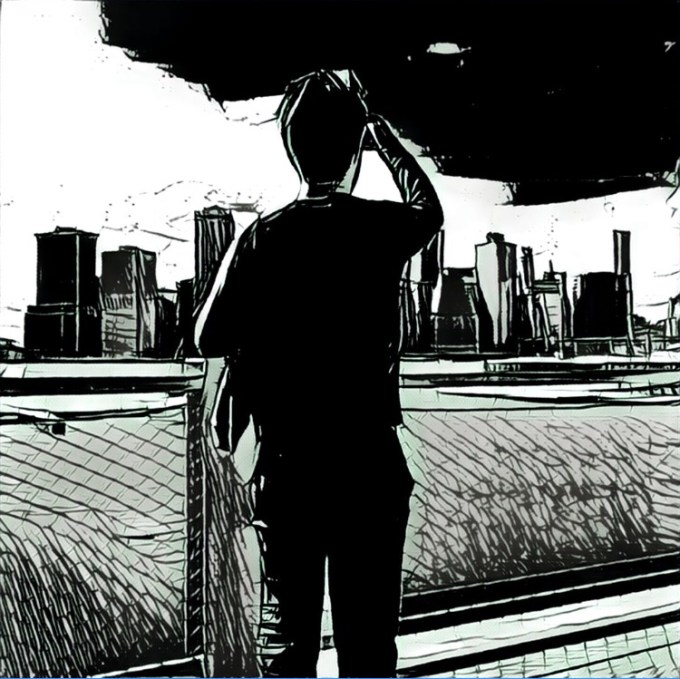 The Prisma team has attracted some external investment supporting development but Moiseenkov isn’t able to disclose too many details at this stage.

One of the investors, My.com/Mail.ru Group has previously announced it is putting money in, with Dmitry Grishin, chairman of the board, commenting in a statement that: “Artificial intelligence and neural network will bring a lot of change in all types of media content and we are happy to support such startups. We will continue investments into this perspective trend further’.”

The Prisma iOS app is a free download. Monetization, should they end up going down that route, might involve offering sponsored filters — a more likely route than pushing in-app purchases at users, reckons Moiseenkov.

“I don’t know for now but there is a lot of enquiries from big companies and I have no time to talk with them all,” he adds.