Twitter has Periscope. Amazon has Twitch. Google has YouTube’s live streaming. And Facebook has Facebook Live. Now, Tumblr is getting into live video, too. The company is preparing to launch a new live video feature on its service, beginning tomorrow, which will introduce a series of live broadcasts as well as a user-facing feature that could compete with Facebook Live, among other things.

Currently, Tumblr is cryptically teasing the new addition via promos on the Tumblr blog livevideo.tumblr.com, which was first spotted by David Chartier, who posted a tweet:

Huh. Is Tumblr launching live video on Tuesday? Not sure if this is legit or a third party. Would be pretty cool. https://t.co/8bJec9Y216

However, Tumblr has yet to formally announce any official details about its forthcoming live video offering.

In addition, while there’s no indication on the blog that confirms this is an official Tumblr effort as opposed to that from a third-party, we’ve confirmed with sources that these are ads from Tumblr itself designed to promote the live video launch.

In the debut post on the Live Video blog, Tumblr briefly flashes what appears to be a schedule of live broadcasts it’s planning to air. Subsequent blog posts tease several of these upcoming streams, including things like a live broadcast from the surface of Mars, a Q&A session with Adam J. Kurtz, a basketball lesson from a Harlem Globetrotter, and some designed-to-go-viral events, like the odd announcement: “We will inflate a very big thing in a very small room.”

Another broadcast indicates that users will “learn the metaphysical truth about your Tumblr,” for whatever that means. 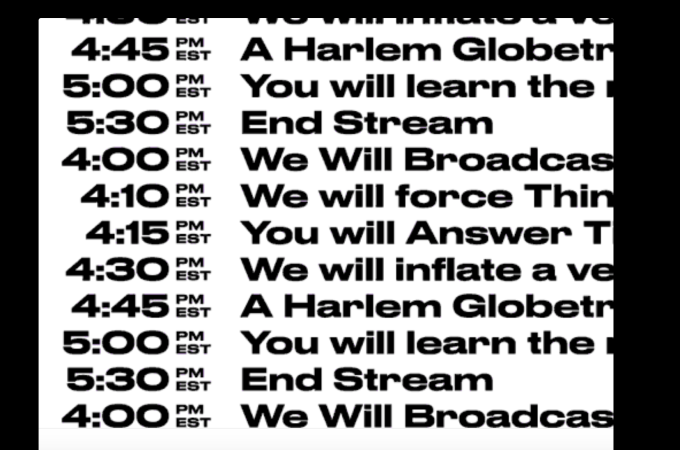 Beyond these community events centered around live video, we hear that Tumblr will introduce a user-facing feature for live video, too. This effectively would position the blog service to better compete with the tools for real-time content that users access today via Facebook Live or Periscope, for instance.

However, what’s still unclear are the technical underpinnings – that is, if the feature will offer a natively built live streaming option, or if it’s meant more as a tool that interoperates with existing live video services already on the market. This will determine whether or not Tumblr’s launch can be seen as more of a direct competitor to Facebook Live and Periscope, or if its entry into the space is more of an integration play.

It’s likely that Tumblr users live streams will be viewable in the mobile app or web browser in order to attract eyeballs, but then would be archived as video that can be played back at any time after the stream wraps.

This is not all Tumblr has in the works around live video, we’re hearing. The company plans to introduce a larger strategy for real-time content on Tuesday.

The move comes at a time when Tumblr has been struggling to make good on its ability to generate the revenue parent company Yahoo hoped for when it acquired the service, in a risky bet to move into social and reinvent the Yahoo brand. Tumblr never hit the $100 million in annual sales goal set in 2014, according to a recent story on Mashable that focused on Tumblr’s many problems post-acquisition.

That said, it’s unclear to what extent live video can help boost Tumblr’s popularity, user engagement, and ultimately ad dollars, as it will now be one of many live video options on the today’s web.