Sleep is an important part of your overall health and wellbeing, which is why Fitbit this morning is rolling out a new feature that will help you establish a more consistent sleep routine as well as send reminders when it’s time to go to bed. While several of Fitbit’s bands already enable sleep tracking, this new setting called “Sleep Schedule” is focused on helping you meet your own, personalized sleep goals, the company says.

The option was developed in collaboration with a panel of sleep experts, including Drs. Michael Grandner at the University of Arizona, Allison Siebern at Stanford University, and Michael Smith at Johns Hopkins University.

According to the medical experts, maintaining a consistent schedule is one of the most important things when it comes to improving your sleep. And failing to do so is essentially like giving your body jet lag – you’re changing your internal clock, which can then impact your physical performance, mental health and cognitive functions. 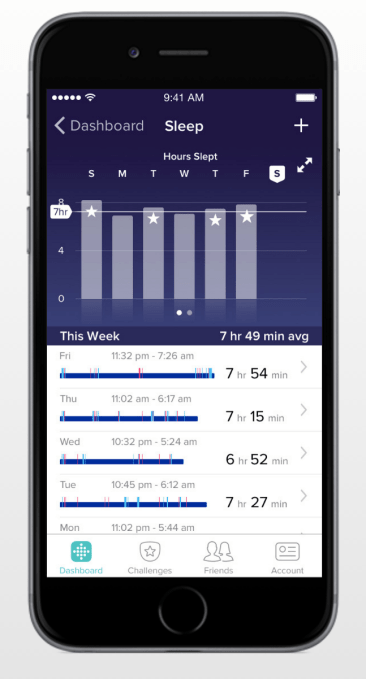 The company also cited research that says getting enough sleep can also positively impact how much you exercise the following day, and is critical to post-training recovery.

And for those who are focused on weight loss, sleep also may play a role. Based on Fitbit data, there’s a correlation between those who sleep more (averaging 7 to 9 hours) and a lower body mass index (BMI). Those who are obese with a BMI over 25 sleep over an hour less per week than those with a normal BMI.

This, however, can’t necessarily be attributed entirely to sleep – a number of other factors may come into play here, including the fact that those with better sleep schedules are making healthier choices in other aspects of their life as well, including their diet and exercise routines, for example.

With the new setting, users can establish sleep goals and set up consistent bedtime and wakeup targets. The app will recommend how many hours per night you need, and suggest when you should retire and wake, or you can set your own number of hours and times.

It will then begin to send push notifications to your smartphone that remind you to go to bed if you want to stay on track. You can also set a silent wake alarm on your tracker based on your wake up target.

Included, too, is a sleep history schedule to see how well you are doing.

Of course, the feature makes the most sense for those who regularly wear their Fitbit to bed and are tracking their sleep via the device. That’s not something all Fitbit users do, as it’s not entirely comfortable. In addition,  just because a device buzzes or you receive a push reminder, that doesn’t mean you’ll make a change. As with all fitness trackers, they can only help to illustrate your progress and make suggestions, but true change has to be prompted from a desire within.

The update comes at a time when the market for fitness trackers is more competitive, thanks in part to new, low-cost devices like Xiaomi’s Mi Band 2, which is less than $23 and tracks both steps and heart rate. Fitbit, meanwhile, is attempting to differentiate its product lines with better functionality to justify its higher pricing, while also fending off threats from Apple Watch which is cornering the luxury wearable space.

The Sleep Schedule is rolling out now in an update for the Fitbit apps on iOS, Android and Windows. It works with the following devices: Fitbit Surge, Fitbit Blaze, Fitbit Charge HR, Fitbit Alta, Fitbit Charge, Fitbit Flex, and via manual sleep tracking with Fitbit One.