At its Worldwide Developer Conference this week, Apple is releasing a bunch of updates to notifications and the way that developers are able to present them to users in iOS 10. They’re about to get so much more powerful, useful and relevant. Let’s talk about some of the stuff that both developers and users should be excited about.

In an enormous upgrade to the notification system, Apple is also now letting developers see pending notifications and to replace old and outdated notifications with new ones that have updated information. This was never possible before, leading to a big stack of outdated messages when you looked at your phone.

For you developers out there, the new notification ID will replace the old one and when you update the old one it pushes it up the stack. It will be interesting to see whether this gets abused for growth hacking, slightly updating the notification to bump it to the top of a user’s notification stream, for instance. 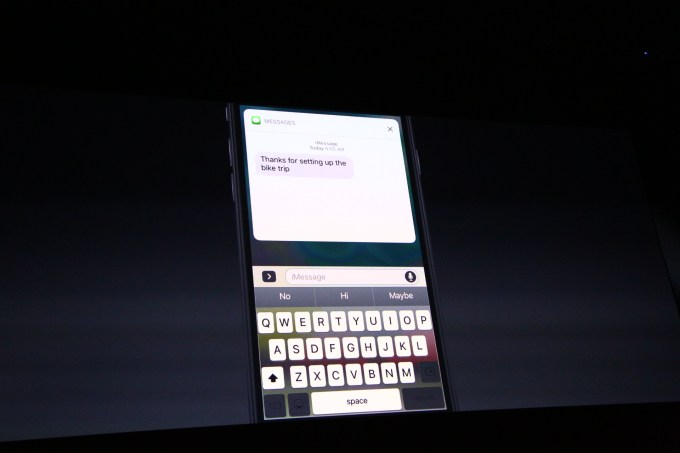 And, of course, notifications can now support intent-based actions in conjunction with the new SiriKit API. Those actions are only supported in the list of categories that Siri supports.

Imagine a sports app, like MLB At Bat, which delivers play-by-play information or scores. When you come back to your phone after being away, instead of a long list of outdated scores and game info, you only get the latest happenings.

There is also now a way for developers to see whether you’ve dismissed a notification — via a new signal built into the notifications framework — allowing them to better gauge how you’re reacting to the stuff you’re sending. This will keep them from pounding you with stuff you’ve not really been interacting with and let them (hopefully) give you things you actually want to take action on.

Notifications now have a “press for more” callout to let you know that you can push on it to get more actionable items.

Currently, a 3D Touch press on a notification to trigger an action does minimize discoverability — and Apple has not at this time disclosed (or decided) how devices without it will handle these new advanced notifications. Perhaps a standard long press.

Notifications now support a few new functions. Photos, audio and videos can be downloaded by an app or directly by a notification and displayed alongside the notification itself. This lets you see images immediately. Expect apps like Instagram and Twitter to play with this for direct messages. And yes, gifs are supported. 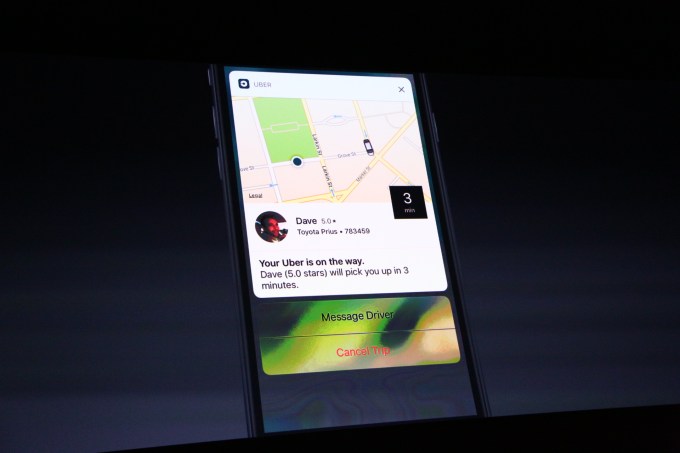 Notifications can act on push, calendar time and location triggers like beacons or geo-fencing. Push is cloud based but all others happen locally. When additional content goes along with the notification it should add more context and should be far more effective for developers. Navigation applications could act when a user enters an area and provide direct visual confirmation of where they should be walking or driving, for instance.

Notifications can have custom layouts and looks now, while still using the system “feel.” The only thing a developer can’t do is provide interactivity (so no “apps within notifications,” yet). These can support quick actions, such as reply, like and so on. But now they can look better and more unique with rich media. All notifications now have title and subtitle fields to play with, allowing apps to provide more information to the user.

Think of a notification that features a band poster to go along with a party invitation. The notification can provide a title, subtitle, picture, text field (for you to add your personalized message to the sender), as well as “accept/decline” buttons. These new combinations should allow for a lot more flexibility and power in notifications.

Watch apps also get improvements. Apps can now do local notifications, which means that they do not have to be connected to a device to send you an alert. Think “workout goal met” or a timer while you’re running. Previously, non-native Apple Watch apps had to connect to a phone to send these notifications.

On the anxiety news front, Apple TV apps now support badging — that bright red circle with white numbers on your email inbox — so you can see just how behind you are on all of your favorite shows.

A new service extension is provided to developers that enables a lot of these features, injecting all of the fun formatting and media stuff into notifications before the user ever sees it. One possibility that should intrigue secure messengers is that end-to-end encryption could be implemented by the service extension, making sure that your notifications are secure from point of origin to the user.

Developers I spoke to expressed a lot of appreciation for the new stuff, but are champing at the bit for the possibilities of building apps on top of the platform, something that won’t come before next year, if it does.

Some of these notifications improvements have already appeared on Android, where Google has been quicker to spool out the possibilities of atomized interactions with content and distributed apps, something I’m convinced is the future of mobile (and publishing, but that’s another story).

But the way that Apple has executed the features is, unsurprisingly, fairly clever. The addition of the service extension function should allow for good extensibility and better security options for developers.