Move Loot, the online secondhand furniture marketplace that offered a full-service pickup, delivery, storage and listing service for buyers and sellers, has been having a lot of issues recently. The company claims that an acquisition is in process and will complete in a few weeks, but declined to give further details on the buyer. In the meantime, customers have been left frustrated and uninformed. Users have been complaining about the inability to list merchandise on the site, the inability to order items for delivery, as well as sales followed by delivery cancellations or deliveries never scheduled.

The company has not been transparent with customers about its current situation. Instead, it has been responding on social media that its website has been having issues, or it simply ignores the incoming complaints.

Many people who sold items with Move Loot say they never heard from the company regarding pickups. Here’s one example from Twitter, where the customer waited 9 days before having to turn to Craigslist to sell the sofa (see below). There are several more stories like this across Twitter, Facebook and Yelp.

after waiting for 9 days and never hearing, I successfully sold my couch on Craigslist. V disappointed with your service :-/

Because the company has not been forthcoming with its customer base about its situation, users took to warning each other via social media postings.

Some of the comments and reviews are just from confused customers who don’t understand if the service has shut down. Others are far more brutal. 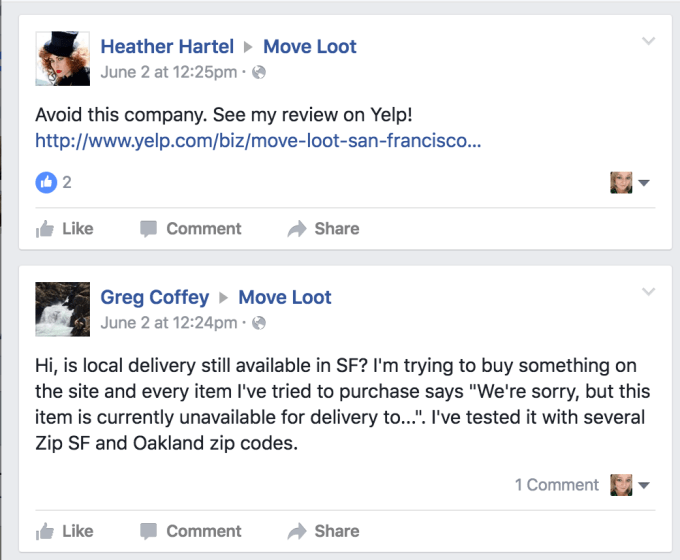 Writes one Yelp user who refused a delivery of the wrong item, several emails went unanswered and the company didn’t answer their phones. They had to file a dispute with their credit card company.

“Notice that there was no apology at all,” the customer’s Yelp review continued. “Additionally, they did not send a refund.”

This review is not an outlier.

Many others recent Yelp reviews (with what seem to be generous one-star ratings) speak of troubles getting paid on sales, non-responses from customer service, ordering mistakes with no apologies, sales where deliveries are never scheduled, unanswered emails, delivery cancellations, no phone support, refusal to refund, no explanations on issues, and much more.

Customers even say that when they tried to call, the Move Loot customer service voicemail said something to the effect of “we no longer offer phone support.”

Move Loot is great in concept – a site that reduces waste and promotes re-selling instead of buying new. However, it has had trouble figuring out its business model, logistics and labor model.

The company announced a way for buyers to search for products from furniture store partners in October. By expanding beyond the individual consumer, Move Loot hoped to create more demand for its merchandise. In March, it announced a nationwide expansion and partnerships with local and national delivery partners 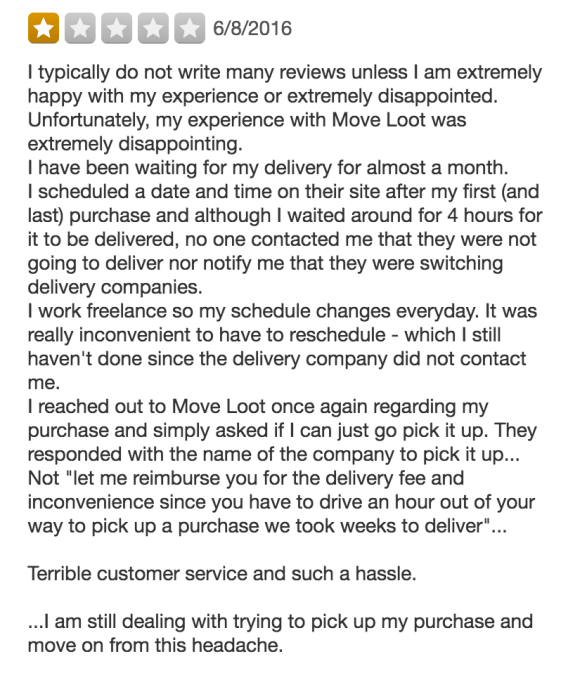 We understand that Move Loot has actually been struggling for some time. Unreported layoffs toward the end of last year reduced headcount to nearly nothing in cities they expanded to, like Atlanta and Charlotte. The company also let the finance, and customer experience directors go. Other higher-level staff was laid off in San Francisco.

Despite this, the startup has continued to present an image that all is well – even doing profiles in the press as recently as May.

Move Loot CEO Bill Bobbitt says the company is hoping to have acquisition news to announce soon. In an email to TechCrunch, he shared the following statement, which also addressed some of the above particulars:

“Since last Fall, we have been evolving the model toward profitability, both to get ahead of the changing financing climate and to improve the scalability of our business. We were on track to achieve operational profitability in our California markets, but we were not gaining the market saturation in the Southeast needed to justify the costs of the existing model.

In March, we opened up both sides of the marketplace nationally, eliminating the need to pick up and store items before they sold. We achieved this through local and national delivery partnerships – a major transition that required us to realign our organization, product, and operations to meet the needs of the new marketplace. We had to let great people go across the organization as the multiple transitions were realized. One of the best parts about building a company is surrounding yourself with incredible people, and this has been the hardest part of the process by far.

We are now in full acquisition talks to join forces with another symbiotic company, and we hope to be able to share more news within a few weeks. As part of this, our team is also in the process of reaching out to every person who has contacted customer service to ensure that any issues are resolved.”

If an acquisition goes through which allows Move Loot to continue, it will have to undo the damage to its brand. It has squandered some of its goodwill with customers, who now feel misguided, with their complaints ignored.

The company has raised nearly $22 million in outside funding from Index Ventures, Metamorphic Ventures, First Round, IDG Capital Partners, Sherpa Capital and others, according to CrunchBase.