Making it easier to type using emoji is something a number of companies are working on. Microsoft’s SwiftKey is testing an app that offers emoji suggestions as you type, for example. Google’s iOS keyboard app Gboard debuted with emoji search. Now there’s an app for Android users called Emojifi which has a new idea. Instead of making users switch to a new keyboard, Emojifi works with your default keyboard, but introduces automatic emoji suggestions as you type based on tagged words.

Switching between keyboards can be a pain, and people often struggle to leave behind the main keyboard they’ve grown comfortable with just to have slightly easier access to something like emoji or GIFs.

That’s what makes Emojifi interesting – it lets you forego keyboard switching, in favor of its pop up “Emoji bar” which will offer suggestions as you type. While emoji suggestions isn’t an entirely novel idea, the way Emojifi is using tagging is something different.

To use Emojifi, you have to toggle it on in Android’s Accessibility Settings.

Out of the box, the app has a set of words tagged to each emoji. However, you can also customize the app by tagging other words to an emoji based on your own communication preferences.

For example, you could tag the word “kk” to link to the “thumbs up” emoji. When you tap on the emoji in the bar, the typed word is replaced with the clicked emoji. Alternately, you can long press to insert a tagged word along with the emoji instead.

You can also drag this emoji bar around your screen, in case it gets in the way. And you can configure the app to work in other applications besides texting, including Gmail, Facebook, Google+, Hangouts, Instagram, Twitter, Messenger, and many others. (These can be switched on or off in the app’s settings.) 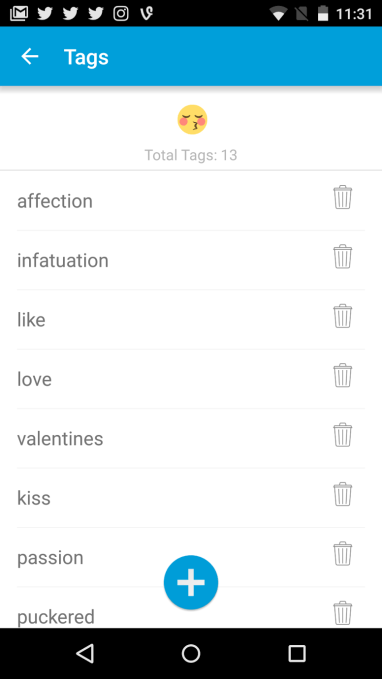 Explains Emojifi’s creator, a mobile and server-side developer Varun Medapuram Subramanya, “none of the messaging apps suggest the right emoji for you to click when you type in the word, instead you have to scroll through several ‘pages’ to find the right emoji. I am an avid user of emoji and even after years of entering emoji, I still can’t remember where certain ones are,” he says.

This is actually a pretty common problem, and Varun believes that live suggestions are the best solution.

Now the bootstrapped team of three is working to bring similar functionality to GIFs and stickers, they say. In the future, the startup thinks it could generate revenues through sales of premium content, including GIFs and stickers, or even brand-based emojis, stickers and GIFs.

Unfortunately, the concept of a floating bar that sits above your current keyboard is something that could only work via a third-party application on Android. iOS doesn’t allow for such an application – it only lets users install third-party keyboards they have to switch to. (Update: However, Apple announced today it will support emoji suggestions in iMessage in its upcoming iOS release, iOS 10).

Emojifi for Android is a free download on Google Play. (The Emojifi app on the iTunes App Store is not related to this – it’s a different company.)