When will teens get tired of taking selfies? Probably never given the myriad ways they can augment what nature gave them thanks the power of the smartphone in their pocket.

To wit: since last fall, after teen-beloved multimedia-focused social sharing platform Snapchat acquired a mobile video startup called Looksery, the startup darling has been making hay with a face-detection powered lens feature that lets users recompile their features in new configurations, such as faceswapped with a friend, or morphed into a zombie, or vomiting a rainbow, and so on. 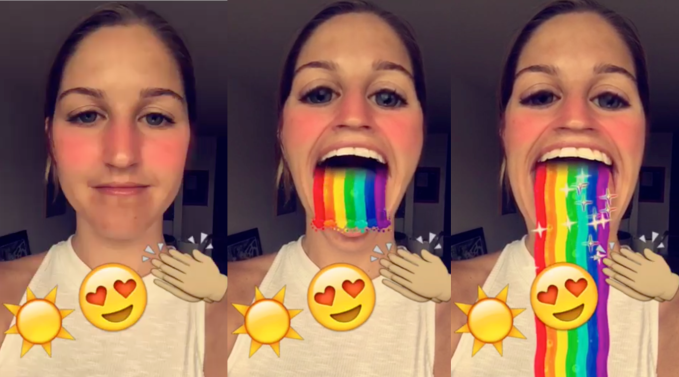 And Snapchat is not alone in this facial faddishness either. In March Facebook bought image filtering app Masquerade, with the intention of integrating the latter’s face-morphing tech into its messaging platform to inject a little more fun into the online space where kids’ parents prefer to hang out.

Bottom line: Keeping younger users engaged and communications flowing is priority number one for social platform giants. Which means coming up with a pipeline of new features to fuel continued use. And that means startups with cool mobile video-augmenting tools are prime targets for acquisition.

Which brings me to YC-backed Seerslab, the maker of the mobile video editing app Lollicam. An exit to a larger entity such as a messaging giant is a distinct hope for Seerslab, given the clear need for novelty among platform giants to keep their services sticky, coupled with the converse challenge of being a small startup trying to defend cool ideas from being copied by hungry platform giants… If you can’t out-resource them, you can at least exit to them, right?

“It is not that easy to protect our ideas and technology because we are small,” admits Seerslab co-founder and CEO Michael Chong, when asked about the app’s defensibility. “In terms of the image processing world, there’s a lot of hard work and real work to optimize or to add some special feature. And as a small startup who has the lack of resource we couldn’t put [so many] engineers to work on our image processing technology.

“So we are just going faster in terms of our idea. That’s what we can do. It’s really tough to protect a new concept and new technology in this space… That is our competitive energy… Of course, in terms of a corporate strategy, we hope to be acquired by the big guy who has a lot of user base.

“But as a small startup only thing you could do is initiate a new concept in this video creation area and then validate some business model with existing brand and content holder.”

Last summer Seerslab launched its real-time mobile video-editing tool for augmenting selfies. Since then the Android and iOS Lollicam apps have racked up more than four million downloads, mostly in Korea and Japan so far. Active users are around the two million mark at this point, says Chong. It’s apparently especially popular with teenage girls.

Growth has been organic, with no marketing spend as yet. Although Facebook took a shine to Lollicam recently — touting the app as one of its partners for a video profile feature at its F8 conference back in April.

Lollicam’s features include face-tracking stickers, such as the big cat mask pictured at the top of this post; cinematic effects; and real-time filters such as a beautification lens that airbrushes skin in real-time or changes your face shape to make it less of a chore to snap the perfect selfie/film a selfie video message you’re willing to send.

The app also lets users augment their selfie/s videos with a wide range of additional effects that can be added via a relatively simple tap to include interface — such as a blizzard of feathers or a rain storm or some animated characters.

(If you think all this sounds weird, prior to Lollicam the team’s first idea was to create a dating app using their facial recognition engine to try to match ssingles who look similar — based on the theory that we’re attracted to people who look like us… “Accuracy rates for facial recognition in the mobile environment” scuppered that plan, however. Which was probably for the best.)

There’s no editing after the fact with Lollicam. It’s all done before you snap a selfie or in the middle of recording a video, with effects applied in real-time as you select and tweak them. The processing is also done on the phone, not in the cloud. So use Lollicam for a while and don’t be surprised to find your phone feeling a little hot. The co-founders’ backgrounds include 10 years working in mobile video and camera services, according to Chong.

One big push for Seerslab at the moment is working with content partners like Disney and Warner Bros to enable users to include animated movie characters in their selfie videos — blending into a sort of user-generated marketing space.

This could also see it push towards a revenue share model for users in future, says Chong — assuming it manages to scale up its user base to command a sizable platform of its own.

“Snapchat are following us!” he jokes with a laugh. “We have launched branded sticker before Snapchat’s sponsored lenses. We have worked with some brands with the characters from movies before Snapchat. We have already found this kind of viral tool is very strong for promoting brands.”

Albeit Snapchat of course has the huge advantage of already having a sizable and growing userbase; this month pegged at 150 million daily active users… David and Goliath indeed.

Talking of cool new features, the Seerslab team is not standing still, with Chong talking about another interesting idea it has up its sleeve for Lollicam which he’s not willing to talk publicly about yet. But let’s just say they’re looking to expand how they can augment mobile videos beyond the core facial-tracking tech.

Chong says they are also interested in the potential offered by streaming video, and might add a livevideo feature to the app to expand how people can make use of the VFX. Meaning they could be not just for creating selfies/selfie video to share to their other social platforms, but for streaming broadcasts too.

Becoming a pro tool for YouTubers to augment broadcasts in real-time is another option for the tech, reckons Chong.

The team is also investigating working with camera makers.

“Lollicam will evolve to be not only for selfies but to include some creation environment by power users,” he tells TechCrunch. “We are talking with [a maker of a 360 degree camera] that is thinking of using our Lollicam app as a controller for their stationary camera. So what will happen in future is some power user, YouTube star, could easily put some Lollicam cinematic effects on their video. In real-time.”

Music stickers are also in the Lollicam arsenal, to add another layer to selfie videos.

Chong says it’s talking with a K-pop music star management firm about adding content from the artists they represent — adding that that could be a future route to charging users for branded music stickers, should the team end up needing to flick the monetization switch.

“YouTube is losing the power of a viral platform to promote the music because simply they are too big at this time,” Chong argues, describing how Lollicam users might be able to add music and animated content from their favorite K-pop band to their selfies in future if the talks go to plan.

Prior to getting onto YC’s program, Seerslab raised $1 million in pre-seed funding, including funding from several Korean angels plus some government grant money. It’s since taken another $1 million, including YC’s backing. And is hoping to close a seed round by the end of this year.

The intention now is to focus spending on marketing and product, according to Chong — hoping, ultimately, to prove out the mantra that if you build it the users will come.

Or maybe if you beautify and amuse them enough, the users will keep coming back.

Followed, perhaps, by an Asian messaging giant acquirer — like, for example, Kakao Talk — keen to augment its app experience with yet another fun tool.

“Many people are trying to build something like YouTube in the mobile. But it’s not easy,” adds Chong. “There’s still something painful for general people to edit the video on such a small screen, so pain means opportunity — so we decided to try to tap such an opportunity.”