Like everyone else these days, Microsoft sure loves its bots. Now, the company has rolled out its own news-finding bot called “Rowe,” which lives inside the latest version of Microsoft’s Bing-powered personalized news reading app, News Pro. Rowe is an experiment with helping you keep up with the news that matches your current interests. You can ask the bot to show you news by typing in a topic, view today’s headlines, ask for other personalized suggestions or read the stories the bot has surfaced for you already.

Rowe, however, seems more like an assistive search engine, rather than a true AI-like bot, as its “personalized” suggestions are not as good as its ability to return articles on a given subject. And even then, its results are a bit limited. For example, if you type in a popular, but broad, subject like “U.S. Elections,” the bot returns just three top stories, one of which currently appears to be more of an op-ed/thought piece rather than hard news. That’s not a great experience.

Below its recommended stories, buttons appear that let you pull up more news articles on the subject, like those focused on “election predictions” or “polls,” in this case. 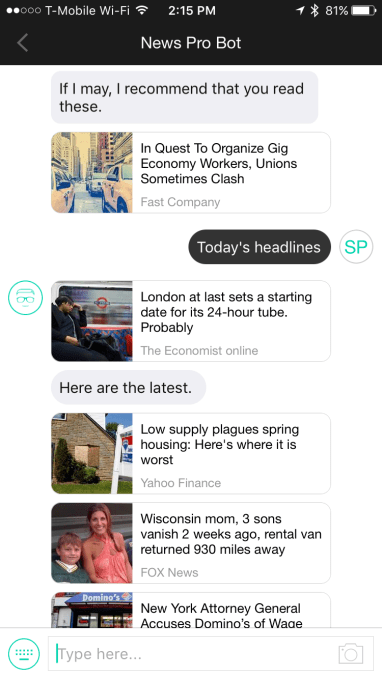 Meanwhile, if you type a news topic that’s a bit more specific, the selection of stories may improve. For instance, asking Rowe about “Twitter 140” — a reference to Twitter’s plans to distance itself from its strict 140-character count rule — the bot returns popular stories from well-known sites like Yahoo, CNET and PCMag.

Rowe has one other weird and not entirely practical trick, too — if you upload a picture of yourself, it will surface news articles where the person in the story looks like you. Why? Uh, because it can? (Oh, and prepare to be either very flattered or very insulted by its results.)

The bot — initially spotted by the blog MSPoweruser.com following Microsoft’s announcement — is the latest development from Microsoft’s News Pro app, which first debuted this January. A sort of standard news-gathering app, News Pro is Microsoft’s own take on something like Apple News, or the third-party app Smart News, perhaps.

The app offers users a customized experience by connecting to your Facebook and LinkedIn in order to better understand your interests.

In practice, News Pro doesn’t do a great job at personalization yet, I’ve found. While it accurately suggests stories from areas like “computer hardware” and the “Internet” for me, it misses a number of possible suggestions that could be easily pulled from my ever-growing set of Facebook likes.

Similarly, the bot feels rough around the edges, too. But this is not an “official” Microsoft product, we should point out — it’s an app from the company’s internal R&D incubator, Microsoft Garage.

Microsoft is hardly the only company experimenting with new ways to deliver the news via bots, however. Other efforts in the space include those running on Facebook Messenger’s bot platform, like bots from CNN, The WSJ, Business Insider or even yours truly; Telegram’s news bots; or independent efforts like Quartz’s app, and many more.

The updated app also introduces other features, including groups for discussing the news with others, for example.

Rowe is available in the updated News Pro app on iTunes here.