After announcing the expansion of Android Pay in the U.K. earlier today, Google also made a few additional announcements around its mobile payments service at its I/O developer conference today.

Pali Bhat, Google’s senior director of product management for Android Pay, told me that one and a half million users in the U.S. now set up Android Pay on their phones every month. “We’re very excited with all the momentum we’ve seen since we launched,” he said.

To push this momentum forward, though, the company knows it has to figure out how to make using mobile payments as easy and convenient as using a credit card or cash. Bhat argues that to do this, the company wants to offer “amazing value” to both users and the rest of the ecosystem, including merchants, banks and developers (for in-app purchases).

For users, maybe the most interesting update today is that Android Pay will now work at some ATMs. For now, the company is only working with Bank of America on this project, but others will likely follow in the future. Thanks to this, you will soon be able to roll up to a Bank of America ATM, tap your phone and make a withdrawal (which is good news in case you forgot your wallet at home but not your phone, I guess).

For developers, Google worked with partners like Stripe, Braintree and others to integrate Android Pay into their payment services. According to Bhat, it only takes a few lines of code to enable Android Pay support with these partners. For developers who are working with a payments processing service that doesn’t support Android Pay yet, the company is also launching a self-service API today.

The company previously only worked with a select group of developers to test its Android Pay integrations (think Uber, Yelp, Eat24 and Ticketmaster), but the service is now live for any developer who wants to integrate it into apps that sell physical goods and services (only in markets where Android Pay is available, of course).

Even though in-app shopping is probably more convenient than using a mobile web site for buying stuff online (which is often a painful experience), plenty of people do use the mobile web for online shopping. Here, the Android Pay team is betting on the cross-browser Payment Request API, which is still making its way through the W3C process. The team worked with the Chrome team to integrate this API with Android Pay already and services like Booking.com and Shopify are already testing it with their users.

Banks, too, can now more easily integrate their mobile apps with Android Pay, but what’s maybe more interesting is that merchants, too, can now build more interesting integrations into the service. As Bhat told me, the team worked with Walgreens, for example, to bring that company’s Balance Rewards loyalty program to Android Pay users. To use their virtual loyalty cards, shoppers simply tap their phone to the payment terminal and users who haven’t signed up can do so with just a few taps (though their personal info will go right from Android Pay to Walgreens, which may not be something everybody will be comfortable with, including those of us who use fake names and throwaway email addresses to sign up to these kind of programs…).

All of these updates represent relatively small steps in making mobile payments more ubiquitous and convenient, but it’s really the sum of all these small parts that will decide whether services like these will succeed in the end. If I don’t have to hunt for my loyalty card in the deep recesses of my car’s glove box to get a discount at Walgreens, for example, and can just pay with a tap of my phone, then that’s already a win in my book. 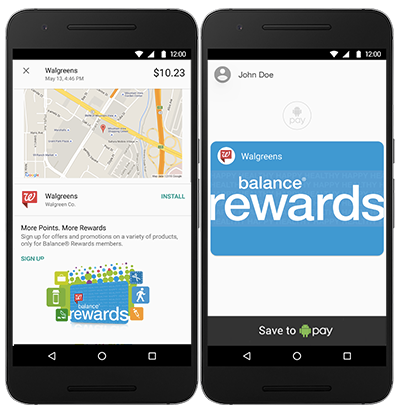