Facebook appears to have been blocked in Vietnam as a part of a government-imposed crackdown on social media, amid public protests over an environmental disaster attributed to toxic discharges from a steel complex built by Taiwan’s Formosa Plastics. Dissidents are blaming wastewater from the steel plant for a mass fish death at aquatic farms and in waters off the country’s central provinces. Citizens have been using Facebook to organize rallies, which is likely the cause of the shutdown.

Instagram also appears to have been affected, according to reports.

In addition to helping protesters organize, social media has been used to share photos of people at rallies, holding up handwritten signs that read “I choose fish.”

Citizens are angry both at the steel company and their government’s inaction. Formosa had denied wrongdoing in the matter, and the Deputy Minister of the Environment and Natural Resources said the fish deaths had been caused either by a toxic algae bloom or industrial waste. He also denied that Formosa was to blame.

Police arrested up to 300 protesters in Ho Chi Minh City’s Paris Square, and many injuries were sustained during that process.

The UN’s High Commissioner on Human Rights recently referenced these protests in a press release, saying: “We are concerned about the increasing levels of violence perpetrated against Vietnamese protesters expressing their anger over the mysterious mass deaths of fish along the country’s central coast.”

The fish kill began in April, and a government investigation is still underway.

According to the Israeli proxy service Hola, whose software would be used to route around internet censorship like this (and which is capitalizing on this situation by way of press releases), both Facebook and the photo-sharing app Instagram were blocked on Sunday.

The company says it experienced a significant surge in downloads following the Facebook blockade.

“Though security forces have been preventing protesters from gathering in Hanoi and Ho Chi Minh City, many citizens have been using Facebook to exchange information and organize rallies, thus the government is presumed to have shut the website down,” the company wrote on its blog. 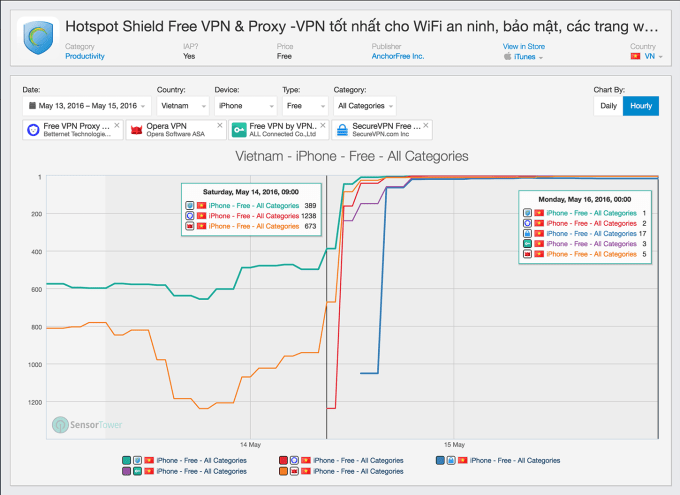 We’ve confirmed via app store optimization firm Sensor Tower that mobile VPN applications in the country also saw a huge boost as users there are trying to circumvent the block. (See above chart). This pattern is similar to when WhatsApp was blocked in Brazil, and is a fairly good indication that a Facebook blockage was, indeed, in effect.

As another source of confirmation of sorts, the Head of PR & Comms for Opera & Asia posted on Twitter that their company saw a surge of VPN users from Vietnam, and suspected a Facebook block was to blame.

There are a number of Twitter reports of a blockage as well.

Meanwhile in #Vietnam, Facebook has been blocked to curb protests. They didn’t learn from Arab Spring…

Hello world! Anybody there? No #Facebook access now here in Vietnam. Friends in PH, you don't want this to happen to you. No fun!

Having issues with facebook and instagram. I am in Saigon Vietnam. Anyone know the reason please! #instagramproblem #facebookdown

Vietnam’s government has blocked social media off and on over the years, though more recently leaders appeared to be embracing Facebook. In October, Bloomberg reported that Vietnam’s Communist government even set up its own page on the network dubbed “Government Information,” in an effort to reach the 30 million citizens who used the service.

It’s unclear at this time if the ban, implemented to crack down on the Sunday protests, is still in effect. It appears it may have been lifted, however, according to websites that track outages like outage.report and DownDetector.

It’s also unclear if it extended outside of Hanoi and Saigon, where the demonstrations were planned.