Consolidation is afoot in the online classifieds space as two popular startups born in Barcelona are in advanced talks to merge operations in the U.S.. Wallapop and LetGo — which both provide platforms for consumers to post used items for sale and negotiate the sales offline — are combining their operations in the U.S. to scale up in competition against the likes of large incumbents like Craigslist and eBay, but also newer entrants into the same space, such as OfferUp, 5miles and Facebook’s Marketplace. At the same time the group has raised $100 million in additional funding from existing shareholders to build out the business.

TechCrunch learned of the negotiations from sources close to the matter, and has confirmed it with further sources. The deal was formally announced on Thursday of this week.

We contacted both Wallapop and LetGo, and both declined to comment. (And, while we were asking around for more information, we saw that Spanish publication Vanguardia also published news of this just before we did.)

The U.S. business will be controlled by LetGo, with its team and platform the basis of the operation.

Wallapop is the bigger company in terms of staff — but LetGo is a lot more popular in the U.S., as you can see from these stats from SurveyMonkey Intelligence: 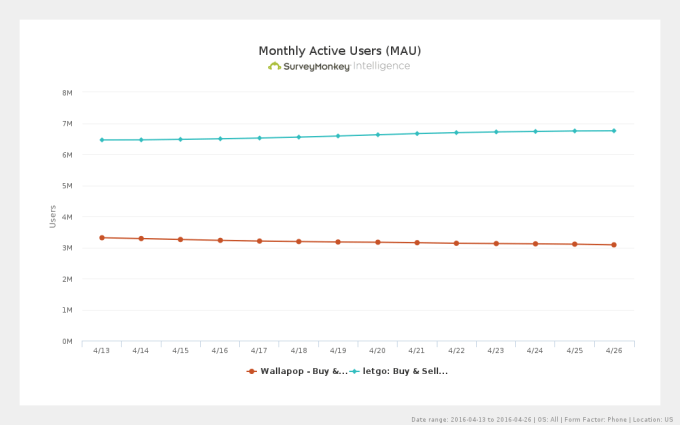 Before now, the companies have each both reportedly raised more than $100 million in funding to date. Wallapop has never publicly confirmed the amount it has raised, although our sources say it is $150 million with the company valued at over $570 million (over €500 million). Its investors include Insight Venture Partners and Accel.

LetGo, meanwhile, is backed by South Africa’s Naspers, which also acquired a previous company from founder Alec Oxenford — the classifieds giant OLX. While both were founded in Barcelona, they have each found audiences in the U.S. market. LetGo calls New York its headquarters. Neither have disclosed user numbers but Wallapop reportedly has around 25 million downloads.

One of the reasons that the two are merging, our sources tell us, is to compete better against both the big incumbent players, but also the wave of other upstarts in this market that are capitalising on the fact that the biggest online classifieds company, Craigslist, has been very slow to innovate.

Key to that has been a mobile-first approach, giving users the classified experience in an app that is easy to browse and comes with geotagging and other localizing features.

They include smaller outfits like 5miles, which has picked up investment from companies like Alibaba. And also bigger names like OfferUp, which in November last year confirmed a $93 million raise and millions of customers.

And there are new plays from bigger and older players. They include Facebook Marketplace, which has been around forever but has quietly grown to be a threat, according to sources. Just the other week, Facebook moved to put a Marketplace link on the lower bar of its main Facebook mobile app — possibly it’s own mark of how it plans to go after this e-commerce market more aggressively.

In this context, it seems like a very interesting coincidence that just the other week, eBay decided to disclose that Close5 has passed 7 million downloads.

From Sell It to LetGo

Last December Wallapop co-founder Agus Gomez officially confirmed rumors the company had made its first acquisition — buying New York based rival Sell It for an undisclosed amount. That deal is interesting in light of the links now reportedly being forged between Wallapop and LetGo in the US because Sell It co-founder, Fabrice Grinda, also co-founded OLX with Oxenford.

“The big bet of Wallapop is to expand our business in the United States,” Gomez told TechCrunch in December, confirming the Sell It acquisition. “We started talking with Fabrice Grinda. [He] is one of the giants, the titans of traditional online classifieds.

“We were looking just to create a strong team in United States on the ground. We start talking about joining forced, we shared completely the same vision about this new category, where it was going. Both teams have a strong feeling, that we are very scrappy, we like to work in the same manner. And it happened very naturally. And now I am really really happy to have Fabrice on our side. He’s amazing. He’s going to help us expand the business in the United States.”

One way for Wallapop to expand its business in the US is by combining forces and resources with a direct rival — a rival made more reachable thanks to its acquihire Grinda’s connections.

Updated with responses from Wallapop and LetGo, other details.