Last week’s App Store issues caused headaches for users who, for several hours during the morning on May 5th, were unable to surface apps using keyword searches. This affected top apps like Uber, Spotify, Google, YouTube, Tumblr and many others, as well as apps from smaller developers. Now we know what sort of impact that outage had on the affected applications. According new analysis from Tune, the majority (65%) of all apps lost more than 10 percent of downloads because of the App Store glitches.

Some apps had it even worse, however.

Around 15 percent of all applications lost more than 50% of their downloads because of the App Store glitch, Tune reports. 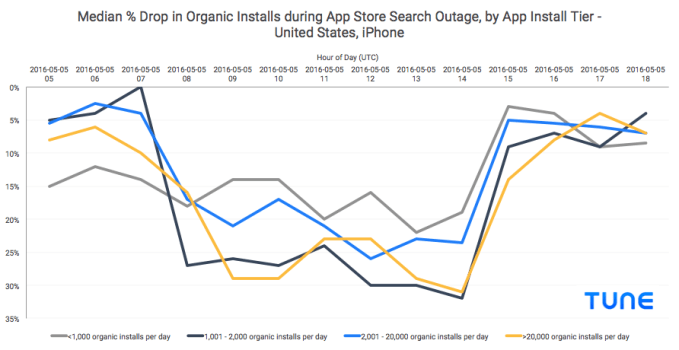 These figures indicate how important search has become as a means of surfacing apps in today’s App Store. The glitch, after all, didn’t affect an app’s Top Charts placement or their Featured placement, if it was ranked in either of these sections. It only impacted search.

As the App Store has grown to more than 1.5 million apps, it’s no longer viable to seek out an app by browsing the charts.

Users on Twitter and Reddit starting noticing the problem in the early morning on the 5th, and then Apple’s own status page reported the issue as resolved by 8 AM PT that same day. Tune confirms that the outage appears to have started impacting organic installs around midnight, but continued until 6 AM PT – a bit later than Apple says.

In addition, it wasn’t as if a switch was flipped, and everything immediately went back to being 100 percent functional again as soon as the App Store’s status returned to green. Organic installs continued to rebound between 6 AM PT and 7 AM PT, the firm notes. 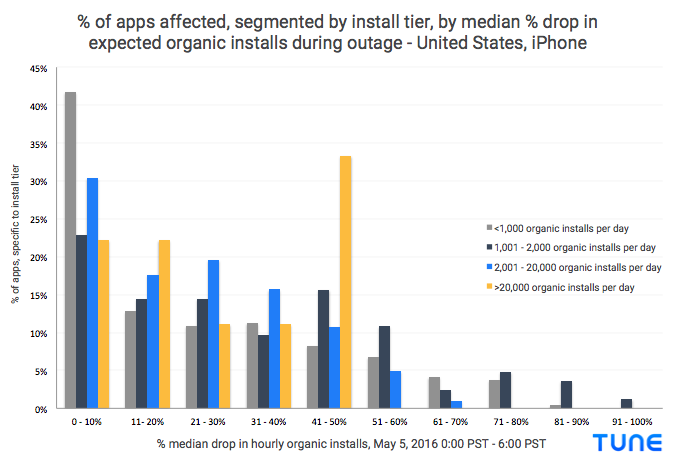 To track the drop in installs and the resulting impacts of a system-wide issue of this scale, Tune looked at how many organic installs iPhone apps in the U.S. got on the day of the glitch and compared it with the same hour of the day over the previous three days.

What was particularly interesting about this particular App Store glitch is that those apps affected the most were some of the “best” apps – meaning those that regularly saw a substantial number of organic installs.

That means the outage cost some of the top-tier apps nearly 2,500 new users or customers. 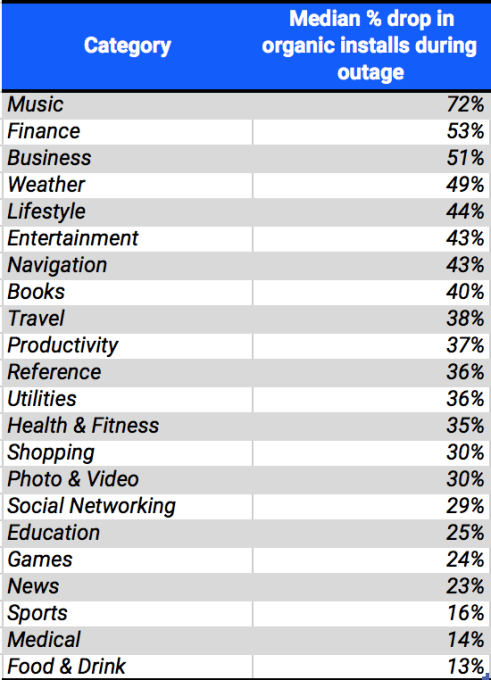 The outage additionally affected different categories of apps more so than others. Games, which are the highest-revenue generating category, saw a 24 percent drop in organic installs, while Business and Finance apps saw their installs halved.

Apple has yet to comment on what caused the outage, but one theory we’ve heard is that Apple may have turned off weighting for keywords in the title.

One thing Tune’s report didn’t get into is how the App Store glitches benefitted those companies whose apps were returned instead of the correct app during the time of issues. But you can see that it didn’t always mean the wrong app came out on top.

Below, you can see Spotify versus SoundCloud, as one example. (via SensorTower)

SoundCloud was returned when users searched for Spotify and this was definitely an unintentional boon for them. Meanwhile, a Tumblr image app Split Pic also benefitted, but didn’t surpass Tumblr despite being returned in place of Tumblr.