Get ready for a lot more ads on Instagram and elsewhere that feel ever more personalised to you. Instagram today is turning up the volume on its ad tech play, courtesy of its owner, Facebook. Today the photo- and video-based social network is adding Dynamic Ads — a retargeting unit that Facebook launched on its own network a little over a year ago (under a slightly different name) that is essentially advertising that is customised to you: showing products that you are more likely to buy based on your online activity and interests.

Alongside this, Facebook is also rolling out two other ad tech developments: a Dynamic Ad unit specifically for the travel sector; and more details to its “lookalike” custom audiences so that web sites using the tool can prioritize types of users, because “some website visitors are more valuable to a business than others,” according to Facebook.

The two refinements and adding Dynamic Ads to Instagram underscores how Facebook is continuing to capitalise on its ever-growing user base — now at 1.65 billion users — and the data that it is able to amass from them. Advertising accounts for nearly all of Facebook’s revenues, which last quarter was just under $5.4 billion.

Facebook says that one of the key reasons its expanding the ad units is specifically to address its mobile users. Mobile accounted for 82% of Facebook’s revenues in the last quarter (working out to 79% of all ad revenues), and its range of apps (including Facebook and Instagram) are part of the wider trend of app usage. Research from eMarketer says that 85% of all time on smartphones is spent in apps, with 85% on average on just five favorite apps.

Facebook itself is also trying not just to capitalise on the data that it has about users, but on the data that it’s collecting from advertisers, too: Facebook says that a whopping 2.5 billion products have been uploaded to Facebook and up to now some 440 million people have viewed products in Dynamic Ads in just the last three months. 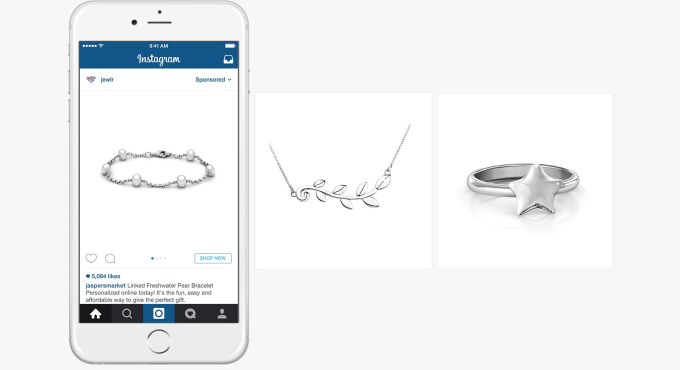 Being an image-based network, Instagram is an obvious platform for extending these Dynamic Ads: “shoppers” on Instagram — that is, people who actively browse retailers’ sites and search for products — visit Instagram 6 days out of every 7 and are way more active on the service overall, using it twice as much as non-consumer minded users. Moreover, Facebook said that a recent user survey it conducted found that 75% “take action” on a website, which might be shopping for a product or searching for more information, after seeing it on Instagram.

It’s for reasons like these that Facebook thinks that there is a very ripe opportunity to do more retargeting for this audience.

“While many advertisers already use Instagram to promote their products, tailoring ad creative and targeting for every product in their catalog has been time-consuming,” Facebook notes. “Now with Dynamic Ads, advertisers can showcase every one of their products automatically with dynamic creative and targeting, so they can show the right product to the right person every time.”

In a similar vein, Facebook’s sharper focus on travel is trying to account for more of the data that can be gleaned about a person’s specific travel intent: this is not only something that Facebook can figure out, but is something that, used correctly, will make the ad more effective. In this case, Facebook will now add location and travel date data into the mix.

“Dynamic Ads for travel empower travel advertisers to offer hotel options to people who have shown interest in taking a trip, either by browsing hotels or searching and purchasing a flight,” Facebook notes. “For example, a travel business can connect with people who viewed a hotel on their website by showing them an ad featuring the hotel they viewed along with similar hotels in the area.” It will also extend to products beyond the one that a user is browsing for: one example are hotels that you might see in ads after you’ve booked a flight.

The last of these — Custom Audiences — is a development on the “lookalike” product that Facebook has had in place since 2013 — but has done little to update in the interim. The main idea here is to add more prioritization into the mix. “The new options address the fact that some website visitors are more valuable to a business than others,” Facebook says simply. This could be a stronger focus on specific kinds of marketing for people who are frequent versus infrequent site visitors, or those who are spending a lot of money on a site. Facebook tells me that an advertiser can set up a campaign to reach the people who visited their site, or they can use the list of people who visited their site to run a lookalike campaign on Facebook.