Ad blocking software’s usage on the web, and now mobile, has forced the media and publishing industry to look to new revenue models. And one of the most notable players in ad blocking is German firm Eyeo, the makers of AdBlock Plus, whose software is dominating the space and still growing. In fact, Eyeo’s co-founder and CEO Till Faida told the audience at TechCrunch Disrupt NY 2016 this morning that his company’s software is now closing in on close to a billion downloads and is installed on more than 100 million active devices.

Those numbers represent significant growth in ad blocking, given that at the beginning of the year the company was touting 500 million downloads and 50 million active users.

That growth can’t all be attributed to AdBlock Plus’ mobile app debut last fall, however. The company’s iOS and Android applications have together seen more than 10 million downloads, said Faida, which he admits is “not super huge,” compared to the overall user base.

Faida also spoke at length about what he believes is wrong with the advertising industry today, and how he sees his company’s role in helping to reset the climate and better the user experience when it comes to ads.

That’s why the company launched its “Acceptable Ads” program, which offers a whitelist of ads that play nicely. This program targets the web’s larger entities — meaning those that gain more than 10 million additional ad impressions per month due to their participation in the Acceptable Ads initiative. For these entities, AdBlock Plus’ licensing fee normally represents 30 percent of the additional revenue created by whitelisting its acceptable ads, the company previously said.

While Faida wouldn’t talk about how much revenue this still-controversial program is generating for AdBlock Plus, he did say that today, of the 100 top U.S. websites, 40 have acceptable ads on their pages.

The company is also now forming a committee composed of stakeholders in the advertising industry, including journalists, publishers, ad tech companies and advertisers, to help better define what an acceptable ad actually is. 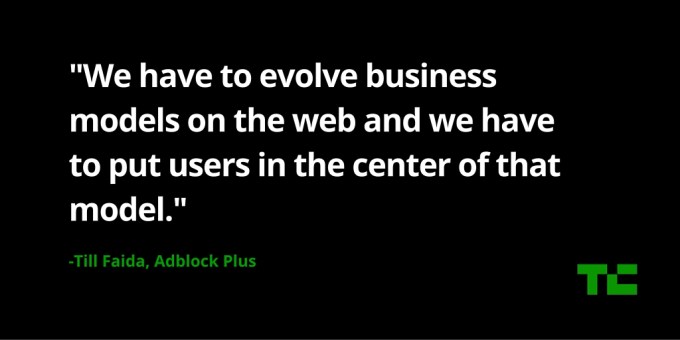 Asked how he would define an acceptable ad, Faida stated simply that “it cannot be disruptive.” For example, a screaming animation next to an article’s text would not be acceptable, he said.

Faida understands that his company is not well-liked by the ad industry — in fact, the following panel featuring IAB’s Randall Rothenberg was separated from AdBlock’s talk today on Disrupt’s stage because of the animosity between the two firms.

As Faida noted, “ad blocking is controversial,” but he added that “disruptive technology has to be controversial.”

And he specifically called out the IAB for causing the rise of ad blocking, which it’s now ranting against. 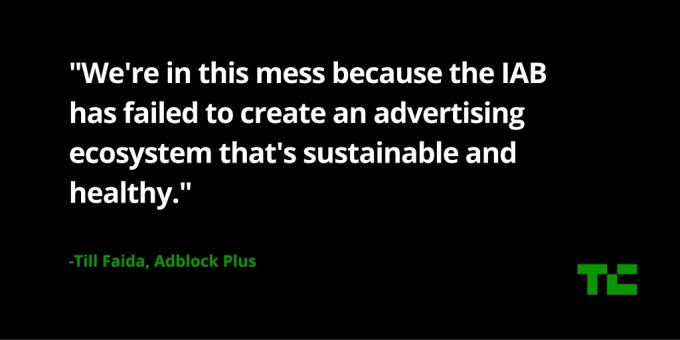 “We’re in this mess because the IAB has failed to create an advertising ecosystem that is sustainable and healthy,” said Faida. “What we’re all about is empowering our users to have control over their browsing experience.”

To that end, Faida is coming up with other solutions to address publishers’ needs to monetize their audience beyond its Acceptable Ads program. It recently launched the Flattr Plus initiative, for example, which is designed to be the first payment system for content on the web that lets users decide how they want to compensate publishers.

“What has been missing so far is a payment system on the web that works everywhere and is frictionless,” says Faida. He believes the AdBlock Plus user base is best prepared to pay publishers in this manner, because they’re the kind of power users who want to have more control over their web experience — even if the majority are fine with ads.

The company expects that Flattr Plus will grow to more than 10 million users by the end of next year, with users spending on average $5 per month to compensate publishers.

Whether or not that will come to pass remains to be seen, of course. But we will know soon what sort of traction this program may have.

Faida says that Flattr Plus will launch into beta by the end of the month.