Smartphone users shoot a lot of video, but turning those videos into something special still takes a lot of work. A newly launched app called Videorama aims to solve that problem by offering a powerful video editor that’s also super simple to use. In other words, you don’t need to be a video pro in order to do things like trim videos, add text overlays, music, or special effects.

Aimed at beginners to video editing as well as social media marketers hoping to capitalize on Instagram’s new support for 60-second video, Videorama is like the video equivalent to graphic editors like Canva or PicMonkey. While the former two services let you create your own graphics for sharing on social media and elsewhere, Videorama is about taking your video footage, then spicing it up before putting it in front of a wider audience.

The app is fast and straightforward to use. You can combine your photos and video together, if you choose, trim videos, and preview your changes in real-time.

A larger feature set is available via in-app purchase, however. You can pick which features you want to buy individually – for example, while full HD support is free, many overlays cost $0.99 as do special effects and music packs. But the app provides a robust starter kit, so you don’t feel like there’s nothing to do in the app without forking over money. 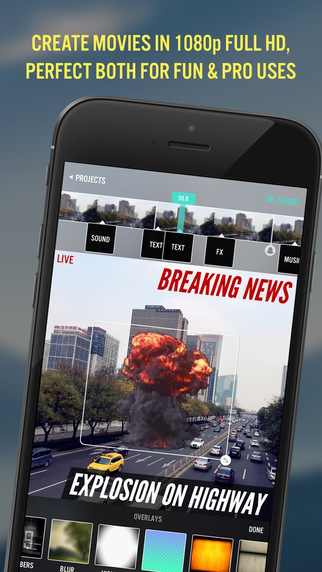 That said, there are a tons of these premium packs available, which let you do things like add explosions, electric bursts, magic spells, weather effects like rain or snow, and much more. You can also make your movie look like old black-and-white footage, or make it look like it’s burning, among other things. And you can buy music packs or import your own tunes. A movie fonts pack is also available for $0.99.

Removing the watermark costs $2.99, which is the most expensive in-app purchase. 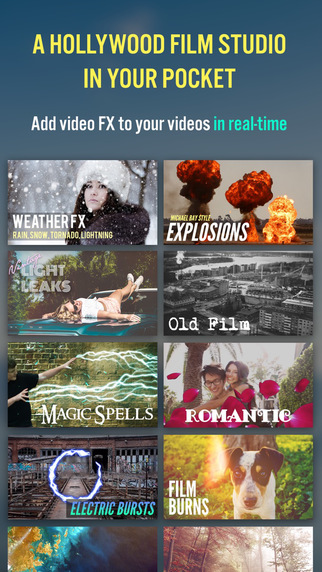 Videorama comes from a two-person indie developer team based in Istanbul, Apperto, who previously created the Typorama app for making typographic art. That app was featured by Apple and saw over a million downloads in a year.

This new app is their big follow-up, they told TechCrunch.

“We’re cinema geeks and we always dreamt of an app where you can add Hollywood-style explosions, magic spells, weather FX etc to your home-made movies,” explains Apperto co-founder Sarp Erdag. “We combined the idea with the style of a desktop quality video editing suite and the result came out to be Videorama.” 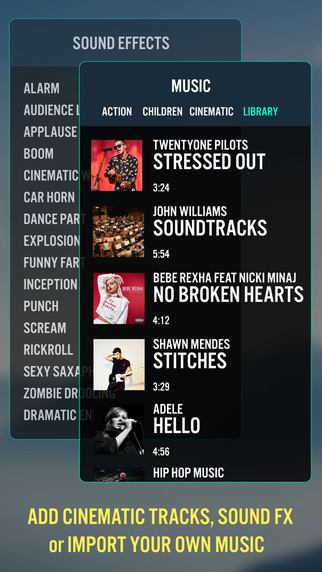 The app quietly launched around a month ago, but it has seen 130,000 downloads over the last five days thanks to being featured on the iTunes App Store. The team has not taken investment, but has received acquisition and partnership offers following its release from big brands, we understand.

Videorama seems to be most competitive with apps like Cameo, the video editor Vimeo bought back in 2014 and upgraded last summer. However, where Cameo is largely focused on editing video that’s then uploaded to its own network, Videorama isn’t associated with a particular brand. Its videos are instead easily shared to Facebook, Instagram, email, messaging, or elsewhere, via iOS’s share sheet extension.

The app itself is a free download on the iTunes App Store, with optional in-app purchases.