Twitter reported its Q1 earnings today, and they’re not great. On the back of 310 monthly active users, the company posted revenues of $595 million, with Q1 GAAP diluted earnings per share of ($0.12) and non-GAAP diluted EPS of $0.15. This is a big miss on revenues but a beat on EPS.

On top of this, the company issued very weak guidance for Q2, and currently Twitter’s stock is trading more than 13% down in the immediate aftermath of the results coming out. We’ll update this as it moves.

Analysts’ expectations for non-GAAP EPS averaged out at $0.10, while the average estimate for revenues was $608 million. The company remains unprofitable with the net loss it reported this quarter coming in at negative $79.7 million. GAAP EPS was expected at negative $0.17. Twitter itself provided revenue guidance of $595 million to $610 million.

The company also issued new guidance on Q2 that spells bad news for the quarter ahead (or at least much lowered expectations). Twitter expects revenues between $590 million and $610 million, but this is a huge step down from $678 million, which is what analysts had estimated before today’s release. Ebitda is also taking a big hit: with Twitter estimating between $145 and $155 for Q2, while analysts had expected $173 million.

Twitter’s 310 million MAUs is not great user growth, although it is up a bit. But this graphic with nearly-identically sized bars, from Twitter itself, sort of says it all when it comes to the topic of stagnating growth. 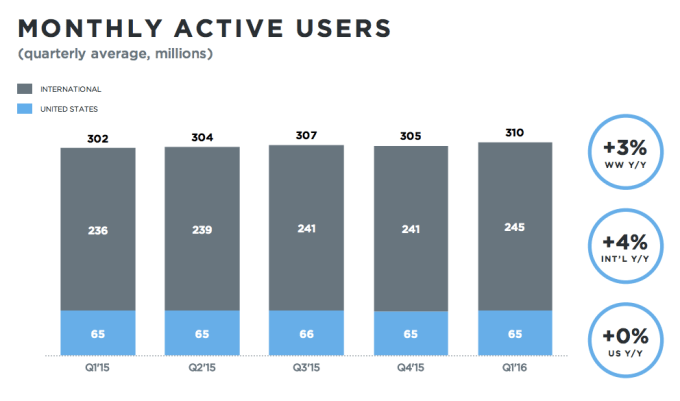 As a recap, last quarter (Q4), Twitter disappointed on revenues of $710 million and adjusted EPS of $0.16 per share, with monthly active users 305 million, essentially flat on a year ago and notably a decline from the previous quarter. And a year ago, the company’s stock dropped 18% on poor revenue and user growth.

A year ago, monthly active users were 302 million, with 80 percent of them using Twitter on mobile.

The thing about Twitter is that it is growing in some of the key areas where it hopes to as a business, but just not enough, at least not right now. The company said that advertising revenues were up 37% over a year ago, representing sales of $530 million. But that number was down by quite some way on last quarter, when ads brought in $640 million in revenues.

Part of this is because Twitter is still not pulling in as many big ad dollars as they expected or hoped to. “Year-over-year revenue growth from large brand advertisers was softer than expected,” the company noted, “although brand advertising remains our largest overall contributor to revenue.”

The company in the last quarter has made some waves to try to extend out its position as a media engagement platform, such as its deal to stream NFL games earlier this month, tapping both into its ambition to do more in video as well as sports content. Its early move with Periscope, however, is now facing competition from the likes of Facebook with its new Live product, and potentially Google, which reportedly is also building a live video service.

“As we outlined last quarter, we’re focused on what Twitter does best: live. Twitter is live: live commentary, live connections, live conversations. Whether it’s breaking news, entertainment, sports, or everyday topics, hearing about and watching a live event unfold is the fastest way to understand the power of Twitter. Twitter has always been the place to see what’s happening now and our continued investment in live will strengthen this position. By doing so, we believe we can build the planet’s best daily connected audience. A connected audience is one that watches together, and can talk with one another in real time,” the company said in its report.

Earlier in the quarter, there was a lot of commotion around the company’s move to play around with the algorithm that serves Tweets to surface them non-chronologically, although we’re hearing a lot less about this more recently both from Twitter and users.

Internationally, it’s made some moves to potentially monetise its audiences outside the U.S. a bit better. In the UK, Germany and Japan (and soon France), Twitter is now working with Yelp to power location services (similar to the deal it has with Foursquare in the U.S.), although a recently appointed a new head of China has been spotted with controversy.