Casual gaming, say hello to super-duper casual gaming. A mobile game that you can play in your iPhone’s Notification Center — yes, without even unlocking your phone — is now the No. 15 top game in Apple’s U.S. App Store and is flirting with becoming a top 50 Overall app. Called “Steve – The Jumping Dinosaur Widget Game,” the game is a very simple experience involving a dinosaur that, as the name implies, you make jump to avoid obstacles in order to achieve the highest score.

As a typical game, there wouldn’t be much to write home about here. But what’s clever is the integration with the iOS Notification Center — a place you don’t normally find entertainment experiences like this.

To date, these sort of tappable widgets have been more purpose-based or utility driven, however. “Steve” changes that by offering a mindless time-waster of a game requiring little commitment on the user’s part. You don’t even have to launch an app.

After installing the game, if you tap its app icon, it will just display the steps required to add a widget to your Notification Center, in case you’re not already familiar with how iOS widgets work. Once added, you simply drag down the Notification Center from the top of your iPhone’s screen and then tap to start playing.

You can even choose to turn the game’s arcade-like sounds on or off right within the Notification Center, too. And when you die, you can tap to start over.

(To be honest, the game is not complex enough to require an explanation, but there you go anyway!)

The game was created by 22-year old founder Iván De Cabo, who currently works as an iOS junior software developer in Spain where he’s also involved in other startups, including one he co-founded. “Steve,” meanwhile, was a side project built in a weekend.

“I wanted to do a simple game just to improve my code skills and decided to do so in the Notification Center for two reasons: to challenge myself and to see if it was possible,” says De Cabo.

Oh, and yes — in case “Steve” looks familiar — the dinosaur character and the gameplay itself was inspired by the Google Chrome Easter egg. In Chrome, a dinosaur appears when the browser can’t display a webpage — like when your Internet connection is offline. However, if you press the spacebar the Chrome error message turns into a simple obstacle runner game, just like “Steve.”

De Cabo says his game is meant to be a “tribute,” and there’s no intention of plagiarism here.

So far, Google has seemed willing to let this slide, we should note. And to be fair, it’s hardly the first mobile app to have copied the Chrome dino game — though it does appear to be the first on iOS.

“Steve” takes the game a bit further than Chrome’s version, by offering the option to unlock other characters like Ninja Turtles or a Nyan Cat for $0.99 a pop. In addition to the new character, the game will also go full color instead of black-and-white, as when you play with Steve.

Fans are now sending around 2,000 emails per day asking for more characters, De Cabo says, and he’s already created 30 more to be released in future updates. 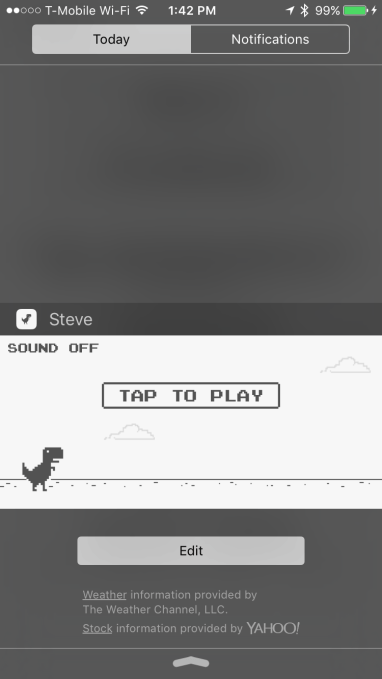 Thanks to what’s now a ton of media coverage, the game ended up in Apple’s trending search section last week, helping it to go viral. By this weekend, the game was seeing more than 40,000 downloads per day, despite a lack of marketing. It’s all word-of-mouth, De Cabo claims.

But one interesting side-effect of building a Notification Center game is that iTunes Connect analytics can’t track usage, as its analytics are based on the full-screen app usage, De Cabo notes.

“For now, we know that users are playing and returning based on the growing players per day on the leaderboards, and basically how it keeps growing by the promotion of the users and their feedback emails,” he says. 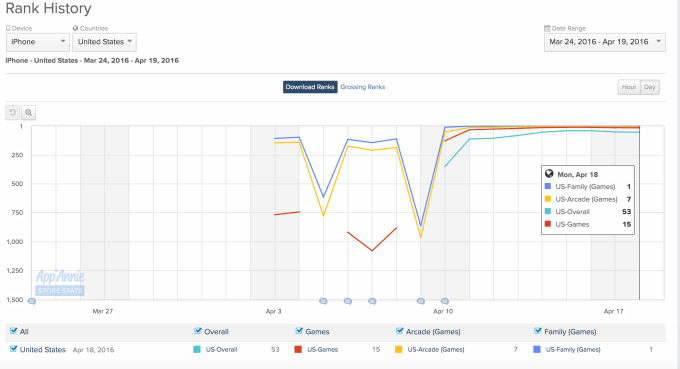 Plus, thanks to its traction, one buyer has been increasing their bid to acquire the game, going from $350 initially to $60,000. But De Cabo says he has decided to keep it for himself.

Of course, things like this often tend to have a short lifespan in terms of maintaining their top ranks — remember Flappy Bird, anyone?

That said, for the time being, “Steve – The Jumping Dinosaur Widget Game” will be the thing everyone will be telling you that you’ve just got to try.

Steve is a free download on the App Store.