A new site launching today wants to be the app store for bots. Botlist, as it’s called, is a third-party database that’s a catalog a lot of the bots currently available across platforms, including email, web, SMS, Slack, mobile, apps, and more.

There’s no question that bots are all the rage. Facebook is planning to introduce chatbots on Messenger this week; Microsoft just rolled out bots on Skype and tools that let developers build bots for any platform; popular communication apps like Kik, LINE, Telegram and Slack have their own apps stores filled with bots; and so on.

Why bots, not apps?

For starters, we’ve reached a saturation point with the mobile app stores in developed markets. While there are new apps arriving all the time, many users download almost no new apps per month, according to studies. They’re basically happy with the apps they already have installed – Facebook, YouTube, Gmail, Maps, Instagram, etc.

Plus, many mobile apps, while arguably easier to use than a mobile website, are accessed so infrequently it doesn’t seem to make sense to have them saved on your phone indefinitely. 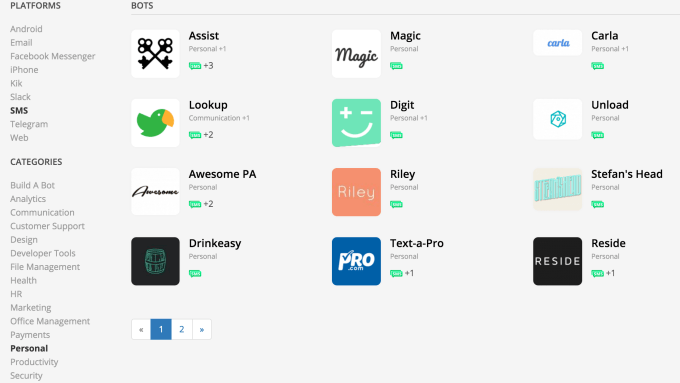 Bots, however, are capable of reaching users on the platforms they’re already on – like SMS, iMessage, chat apps, or work communication apps like Skype or Slack.

In fact, Microsoft CEO Satya Nadella  is so enthusiastic about bots, that he referred to them as the “next applications” at Microsoft’s BUILD conference this March.

So what’s the deal with Botlist, an app store for bots?

Explains co-creator Ben Tossell, a community manager at Product Hunt, the idea is to offer a centralized directory. (Not surprisingly, Botlist is at the top of Product Hunt today, too.)

Tossell says he came up with the idea in January. But freelance developer Mubashar Iqbal and Seth Louey, a creative developer at a software agency, actually built the site as a side project over weekends. Everyone still holds their day jobs, but will continue to work on Botlist as they can. 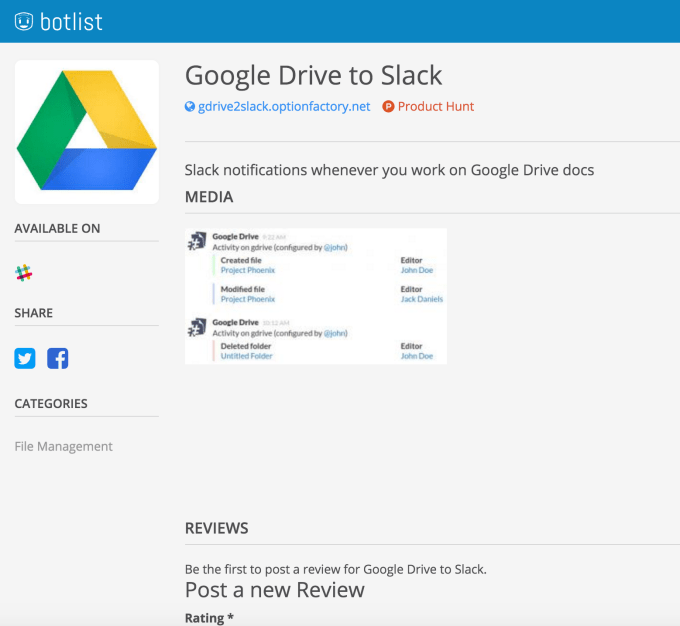 At launch, the site currently lists around 400 bots from services like Slack, Telegram, Kik, and Messenger as well as platforms like SMS, iOS, Android, email and web. Bots are manually reviewed ahead of inclusion. And while submissions are free, the team is charging $50 for expedited – 7 day! – bot reviews. (Bot fever? Apparently.)

This fee structure may change in the future, and the founders are also considering charging for the spots in Botlist’s “Featured” section, notes Tossell.

As it stands now, Botlist is very much an MVP – meaning it still may have some bugs, and a lot of features and functionality is still in development or at least in flux,

Currently, not all bots linked to the appropriate “bot” store where they’re hosted. For example, several Slack bots have links to their company home page, but not their listing on Slack’s app store.

In other cases, it’s the reverse.

Because of the inconsistency here, it’s hard to use Botlist as a “real” app store – that is, you can’t click a button and get to an install page for the bot. 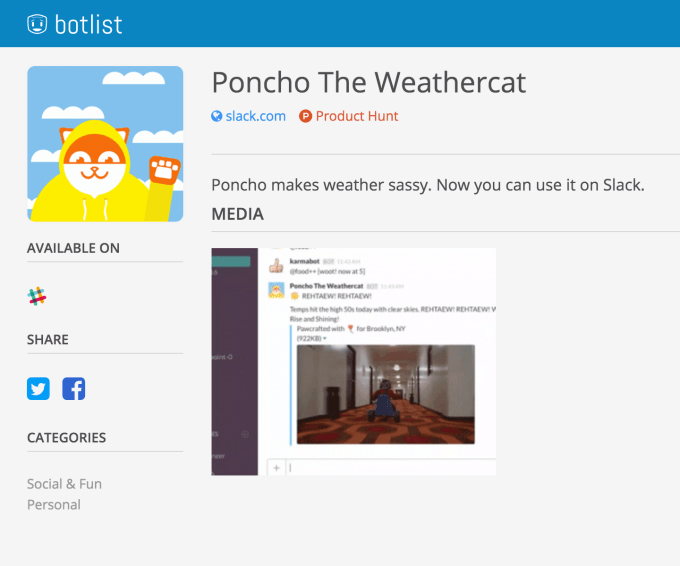 The directory is also fairly bare bones in terms of content. It has brief descriptions of the bots, photos or screenshots, and there’s a section for reviews below. Sometimes the screenshots are merely page from the bot’s Product Hunt listing (also linked), which isn’t as useful as seeing the bot in action.

Bots are organized by category (e.g. Productivity, Marketing, etc.), or you can filter Botlist by platform.

In other words, it’s a simple directory at present, but not much more.

Still, the fact that Botlist exists at all – even as a side project – speaks to the growing bot ecosystem now in development, and demand for an organized resource for finding bots that work across platforms, as many today do.

Now that it’s live, the team is looking to see what feedback users have regarding its future development. One early piece of advice from the community is to allow bot creators control over their own pages – that way they could have design their own listings, upload better photos, and could more reliably point visitors to download links.

For the time being, Tossell says the team will update the site daily with new bots.