Chat bots are one of the hottest tech topics of the year. Inspired by trends from Asia, messaging apps like Telegram and Kik have adopted bots — automated accounts from third partners like publishers and brands — to serve users news, entertainment and other information inside the chat experience.

Facebook has seemingly observed these developments. We reported that the social network giant is gearing up to open its Messenger to third party bots soon, while there is even a news app — from Quartz — that adopted the bot style for delivering the day’s important headlines.

Chat has become the center of the smartphone universe, so it makes sense that bots are being used to deliver information in a convenient and engaging manner. But how do brands or media companies get started and create a bot? That’s where Chatfuel, a company that’s currently going through Y Combinator, is looking to make its mark.

The company is currently focused primarily on Telegram, which is the only chat app to open its bots to all. It has created bots for the likes of Forbes and TechCrunch — hey, that’s us! — but, beyond focusing on media, it has a self-service platform anyone can use. Thus far, that’s been used to make over 120,000 bots which serve over five million users.

It’s more than just basic bots that simply send information to users based on offering them two kinds of responses. Chatfuel is a little more intelligent. Its bots serve up news, lets users narrow down on topics, and even just ask questions about items or people in the news.

Here’s how the TechCrunch bot works, for example:

The goal of the bot is to help you stay on top of the topics and stories you care about the most. You can subscribe to different topics, authors or sections of the site, and the bot will send you news articles from TechCrunch about the things you are interested in the most. For example, I’m subscribed to news about Twitter, Instagram, Facebook and Snapchat.

Chatfuel was founded by Russian entrepreneurs Dmitrii Dumik and Artem Ptashnik last year. The company has 12 staff across offices in Moscow and San Francisco, and it earned the backing of Russian Internet Yandex — ‘The Google Of Russia’ — which led its most recent funding round.

“If you look at mobile apps, it all started as a simple concept that has evolved into something sophisticated today,” Dumik told TechCrunch in an interview. “Messengers are bigger than social networks now.

“[Publishers] can engage with a user on the web or via an app. [They will] consume content and leave, there’s no way to follow-up with them, while apps are expensive to get users to install, and few people install apps — distribution is broken.”

Bots, Dumik believes, can provide a more engaging experience and may grow to be as important as the mobile app today — just more convenient and light for users.

Yandex led an undisclosed round for Chatfuel in February of this year, which included participation from Y Combinator and angel investor Noam Lovinsky, formerly of Google/YouTube. Other backers include 500 Startups, The Knight Foundation and angels Andrey Doronichev (VR at Google) and Jack Levin, all of whom invested in January 2015 before Chatfuel, first known as Paquebot, launched.

Its chat bots may be limited to Telegram, but Dumik — who spent time with Procter & Gamble in Russia before being bitten by the entrepreneurship bug — is optimistic that Chatfuel’s canvas will widen significantly soon.

“Facebook Messenger is the driver,” he said, in reference to rumors that Facebook will open its chat app to third party bots imminently. 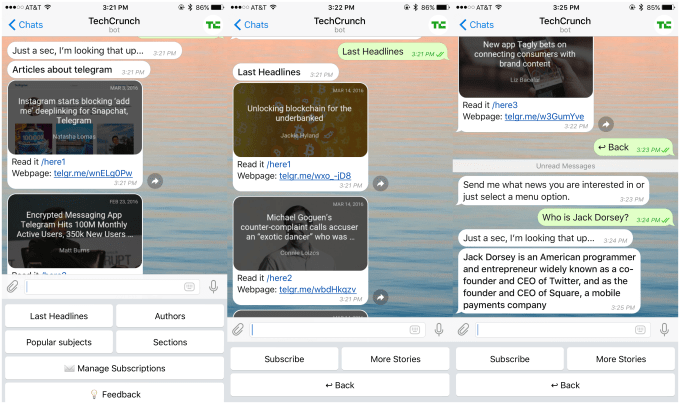 While the bot and messaging space has oodles of potential, Dumik said, the rules of the game and operations are still to be defined.

“Bots aren’t like apps, right now there’s no clear understanding how this particular use case should be done,” he explained.

“It’s exciting that you have to creative a user experience that has never existed before — a new platform that operates with different rules. We have cool tech we can use, how do we figure out how we put it all together so it all works together?” Dumik added.

Also still to come is making money. Right now, Chatfuel isn’t monetizing its service and nor does it have immediate plans to. The main goal for now is to increase its partners, make the AI that powers its bots smarter, and wait for other platforms to open.

Chatfuel recently raised money and, with Y Combinator’s demo day coming next year, the startup isn’t out to raise money like many others in the batch are. It is, however, on the look out for investors who can provide strategic value for the future of its business. Chatfuel has been on a hiring spree lately, most notably bringing in Andrii Iaroshevskyi, who spent five years at Yandex where he led image search, and it is open to adding more high calibre talent to boost the business.