Advertising doesn’t have to be the answer to making money. That’s the ideology behind messaging app company Kik‘s latest feature — Promoted Chats — which allows its 150 million-plus registered users to opt-in and connect with brands in what Kik hopes is a more engaging way.

Snapchat dominates the headlines as the chat app used by teens and young adults in America, but reports have suggested that Kik is as popular in the U.S., even though the company has flown low on Silicon Valley’s radar and raised just $25 million. And while there’s been plenty of hype around Snapchat ads — which rolled out last month and were first revealed by CEO Evan Spiegel at a high profile Vanity Fair event — Kik Promoted Chats was quietly introduced in the summer in beta.

The new Kik feature is simple. A range of companies take up official accounts on the service — Kik says there are initially 25 across fashion, retail, non-profit and more — which can be used to converse with users who opt in to follow them. Replying to large numbers of people manually isn’t possible, so Kik has introduced ‘Keywords’, a feature that lets brand accounts create stock responses based on ‘trigger’ words in chats from users following them.

The idea is that brands have interesting things to say and share so, rather than generic ads for everyone, Kik users can pick which companies that they want to hear from. Or just opt out altogether. Using the right messages, the idea is that Kik accounts can be used to direct users to offers, promotions, new content or feedback.

Take for example this series of chats from frozen yogurt chain 16 Handles. 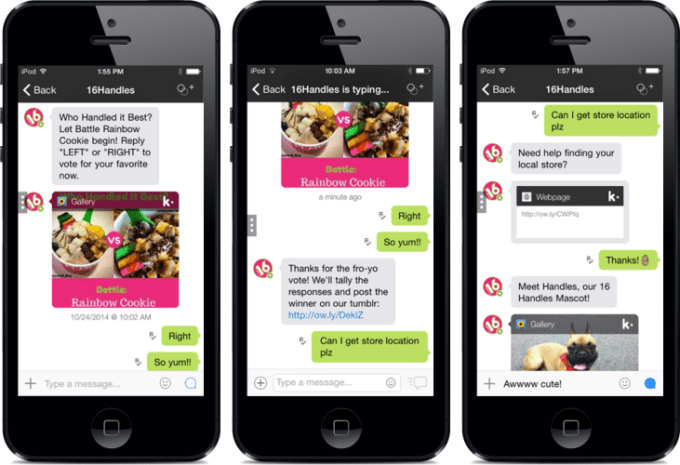 Brands are encouraged to incorporate Kik into their existing social strategy and promote their handle offline, though Kik will also surface their account to users via the ‘Promoted’ tab. That sits next to the main chat button so is frequently visited by Kik users. 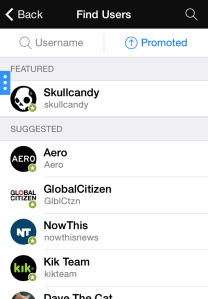 Operating an account and using keywords is free. Kik hopes to monetize the service via the promotion feature, which lets brands set their target audience using location and via a real-time bidding facility that operates like standard online ad portals.

To date, Kik has only made (a little) money by selling stickers, although its recently introduced the Kik Points system — which rewards users for carrying out specified tasks — could probably be tweaked into a money maker.

Likewise its HTML5-based cards system — which allows any website to run inside the integrated web browser inside Kik and be easily shared with a friend — could be configured so that brands pay to make their Kik-optimized websites visible to users.

But, for now, this is the most significant revenue move that the company has made.

“These additions are the next evolution in how Kik can build services for users and monetize our app,” Paul Gray, product strategist at Kik, told TechCrunch in an interview.

Gray added that 6.5 million users chatted with branded accounts during the trial, and during the test period over 100 million messages were exchanged.

Unlike advertising — which is never enjoyable, even when done well — Kik’s approach can be beneficial to users, in a way not dissimilar to how Asia’s top chat apps have integrated opt-in marketing and promotions to their platforms.

“When people talk to these accounts it’s a useful experience for users,” Gray said. While for brands: “Kik will be complementary to Facebook and other social channels. Kik users get native [push] notifications [on their phone] for new messages, which makes them highly likely to read — unlike messages pushed out on broadcast social networks, which just have some chance of being seen.”

This feature seems like another thoughtful addition from Kik, which has made some unexpected moves — including the integration of a web browser into its chat app. Gray says the Canadian startup is talking to a range of major brands already about coming onboard, and he believes that those with an interest in young audiences in North America are ideal fits.

When contacted for thoughts on the potential of Kik Promoted Chat in the communications mix, Sean O’Neal — President at marketing firm Adaptly — told TechCrunch via email:

Mobile messaging apps like Kik represent the next wave of global audience platforms. There is significant scale, with hundreds of millions of users on the larger platforms. But more importantly, they offer a new and more intimate form of brand engagement. The ability for a brand to interact with their audience on a one-to-one basis provides for more meaningful connections. This form of “conversational engagement” has a unique place in our marketing plans and compliments the opportunities across the media mix.

Those who doubt Kik’s significance in the U.S., or perhaps haven’t heard of the app, may be surprised to hear that half of its registered users send content of some form on the service each day. Kik also says that 68% of its users are based in the US — that, it claims, means around 40% of Americans aged 13-25 use the service.

At at a time of seemingly never-ending speculation that Facebook is losing popularity among young Americans, it’s not hard to see how Kik and Snapchat are attractive to brands, particularly given that messaging is a hot topic this year.