Life is hard enough for teens, so Shots sidestepped bullies with a selfie sharing app that doesn’t allow commenting. Now the 6.6 million monthly active user social network wants to boost kids’ spirits by refocusing around comedy. Today’s iOS and Android update lets users share any link, not just self portraits, and the most LOL-worth ones will end up in a special ‘Funny’ tab.

Similar to Facebook’s recent update, Shots users will now be able to add emoji reactions to posts. (CEO John Shahidi says the timing is coincidental and the idea was conceived beforehand). Images with the most laughing emojis will get highlighted in the ‘Funny’ section, making it easier to stumble upon memes and humorous videos.

It’s a big change that certainly makes Shots less visual but gives it much greater flexibility and differentiation from Instagram. While it might seem odd that links don’t have graphical previews, Shahidi tells me this keeps links from clogging the feed and saves data for teens rationing their megabytes. 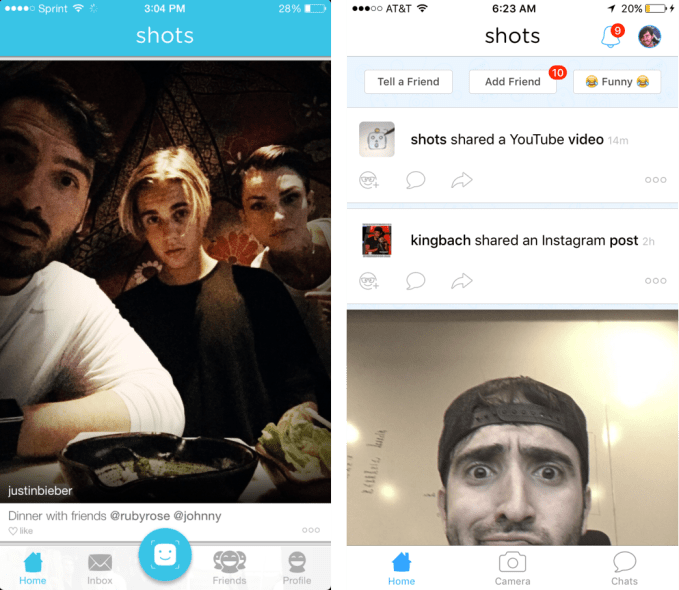 Launched in November 2013 to much derision, Shots has surprised the world with its success. It now has about 10 million registered users, with roughly ⅔ visiting monthly. Many of them are teen girls — Justin Bieber is an investor in the app and helped generate a buzz amongst his fans. 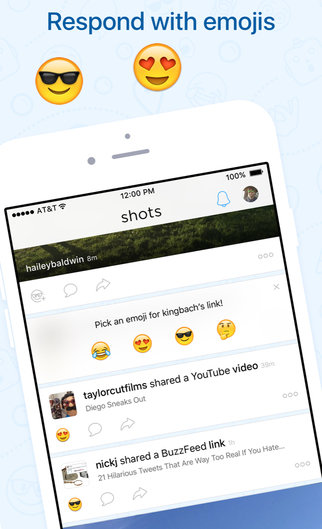 Unlike other social media apps, Shots does not reveal follower counts, something that Shahidi says appeals to younger users. “We want to eliminate those pressures when it comes to posting.”

Shots is headquartered in San Francisco and has raised $15.2 million in funding. In addition to Bieber, other investors include Floyd Mayweather, 500 Startups and Major League Baseball.

“Our mission as a company is to bring positivity and joy” Shahidi tells TechCrunch, and the new comedy focus fits in with the Shots philosophy. He explains that many teens are depressed and the constant success theater of social media doesn’t always help. Seeing how happy everyone else looks in the manicured highlight reel they share can people feel lonely and out of place when they’re hurting. 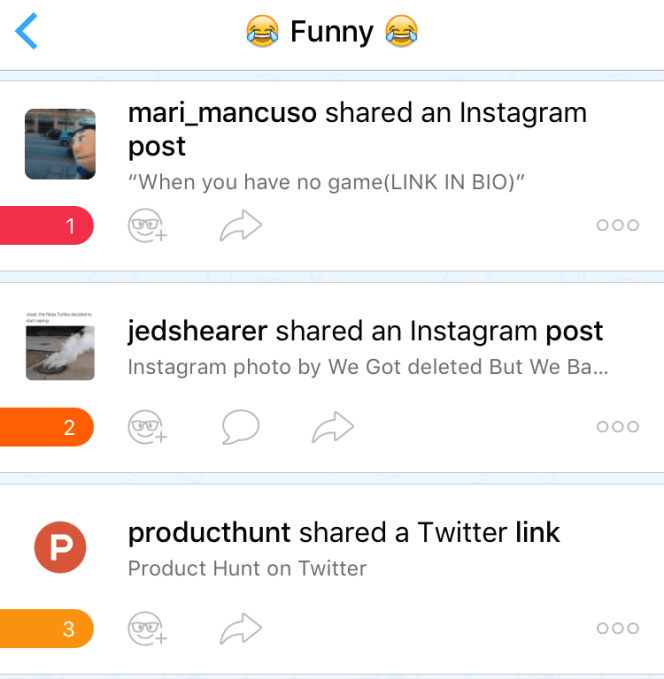 But with Shots, the ‘Funny’ tab could give users a guaranteed way to find a smile. In that sense, the new update could compete with Instagram and Twitter, where millions follow comedy aggregating accounts like The Fat Jewish. Imgur’s 150 million active users seek LOLs in its ‘Funny’ channel. Yet Shots could be a more dedicated place for humor…with some selfies thrown in.

The update could also get more people sharing, even if they don’t want to plaster their face on the Internet. “The new style of sharing of posts will allow someone who is not a content creator to share and express themselves. It’s hard to take the proper photo and/or video” Shahidi insists.

Such a sharp pivot from photos-only to links is a risky move. Shots will have to hope the text-heavy update doesn’t seem too drab or Twitterish. If it works, it could become more addictive than ever. There’s only so many duck faces and sunset selfies we can take. But we always want a laugh.