Mobile OS maker Jolla, who with its Android alternative Sailfish has been trying to carve out a niche for a third platform in the smartphone space for the past five years, has announced it’s signed a new OEM partner: African OEM Mi-Fone.

Jolla announced its first OEM partner last July, India’s Intex. Intex, which is showing its first Sailfish powered device, the Aqua Fish, here at Mobile World Congress, said it wants to get the handset to market in India as soon as possible – working to an April to May time frame this year.

Mi-Fone will also now be bringing multiple Sailfish devices to market in its local region. The first device is due later this year, coming to “selected African markets in Q2″.

Saarnio laid out Jolla’s thesis that the mobile space is heading into a third phase powered by mobile ecommerce, payments and the Internet of Things — which he argued will move the industry beyond the current dominance of ad-powered business models.

“These things are shops already,” he said, holding up his handset. “It’s not about advertising anymore.”

He talked up privacy and security as a differentiating advantage for Jolla – arguing that if mobiles are shops and contain people’s banking information then security and data privacy are an imperative.

“The next era in mobile will be very much focused on privacy and that’s what we are already feeling with our partners when we are discussing with governments and different device vendors,” he said.

“We’re currently talking with different governments about how we could help them create their own OS,” added Saarnio, noting that the motivation is for them to have control and full visibility into software to be reassured there’s no backdoors. “Lots of BRICs country [are interested] but we’re also seeing other countries are waking up for this topic.”

He confirmed the Russian government is one interested in building on Sailfish. And also confirmed Jolla does have some Russian investors, among its other international funders.

Its pitch to its OS licensing partners is the chance to have their content showcased prominently on handsets — via the Partner Spaces baked into the OS. Ultimately Saarnio said Jolla sees potential to take a share of ecommerce revenue directly itself. Although initially he said the push is for OS licensing.

A second announcement at today’s event brings in another partner: ethical mobile device maker Fairphone said it has committed to offer Sailfish as an OS option to its buyers in future, although it will be offered alongside Android so it will depend on users to choose Sailfish over Android.

The Sailfish-powered Fairphone started as a community port project but is now evidently on a more formal footing, with Fairphone today showing Sailfish running on its forthcoming sequel handset. The device includes a neat modular hardware design feature that allows internal and core components (such as the screen) to be more easily swapped out to extend the overall lifecycle of the handset. 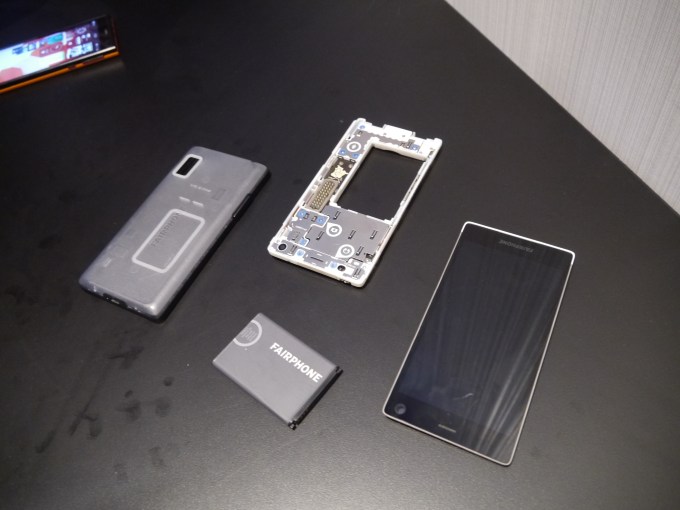 Jolla has shed its own hardware making ambitions, tightening focus on its core software asset. The company scraped through a funding death valley late last year after failing to close a Series C financing round, leading it to ‘temporarily’ let go of around half its staff.

It did subsequently close the round but has been unable to re-hire all employees so is a slightly smaller little fish than it was in 2015. Despite that Saarnio was sounding upbeat today.

“Now we are strongly continuing, as you can see, with our partners. I’m really happy that our partners, during this difficult time, believed in us. And we were able to continue with the projects that we started before that.”

“Jolla is here, Sailfish is here and we are going to stay,” he added.