Finnish smartphone startup Jolla has inked the first licensing deal for its Android alternative Sailfish OS, some three years after starting out on a grand plan to save the open-source mobile platform Nokia was abandoning in favor of Microsoft’s Windows Phone.

Today Jolla has announced that India’s OEM, Intex, which it says is the country’s second largest mobile maker (after Micromax), will be bringing “Sailfish OS based products to the market later in 2015”. According to The Indian Express, Intex will be launching a 4G smartphone running Sailfish called the Intex Aqua Fish this September, priced at around Rs 15,000 ($240). Update: According to Jolla, the price-point for the forthcoming handset will be less than Rs 10,000 ($150).

Last week Jolla announced it is stepping away from making handsets itself, as Jolla Ltd, to fully focus its efforts on developing its Sailfish software — and on that OS licensing business. Competing directly with your OS licensing customers didn’t, after all, work out too well for Microsoft’s mobile handset and OS business.

While Jolla Ltd is solely focused on software, the company is intending to create another business to carry on building hardware — with more details on that due by the end of the summer. If Jolla’s licensing business takes off this separate company could end up acting as a hardware showcase to potential Sailfish licensees.

Either way, Jolla Ltd has freed itself up to present a tighter pitch to partners in its target BRICS regions — that pitch being for a more flexible mobile platform than Google’s dominant Android OS (but an OS that is nonetheless compatible with Android apps, helping to close the app gap which continues to prove a gulf for other Android and iOS challengers).

Jolla is offering Sailfish partners the chance to deeply embed their services within the platform — in an area it calls PartnerSpace (example below, showing Times Internet’s music service gaana) — holding out the prospect of a more localized smartphone experience to woo regional buyers, and one where regional brands partnering with Jolla get the chance to generate revenue thanks to their “premium” placement within the smartphone OS. 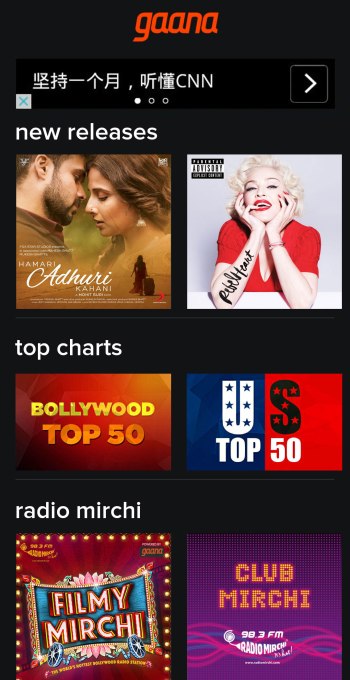 Of course all this only works if BRICS buyers can be convinced to opt for Sailfish handsets, rather than Android (or Android Open Source Project) handsets. Time will tell. Handset price and bundled local services may well lead here though, especially for first time buyers who aren’t already accustomed to a smartphone OS.

Jolla reckons its Sailfish licensing push has the most early momentum in India. Today it formally announced ‘Sailfish India’: aka its “regional mobile ecosystem initiative” for the country, with the first partners named as the aforementioned Intex Technologies; along with digital media company Times Internet; and Indian ecommerce giant Snapdeal. (It has previously announced a Sailfish Africa initiative, but has yet to name any partners there.)

“The aim for Sailfish India is to develop a unique Indian mobile ecosystem, which will lead to greater differentiation in the market with more choices for consumers, higher user satisfaction and better revenues for local businesses. Further Sailfish India partners will be announced later,” Jolla said today.

Commenting in a statement, Jolla’s executive chairman Antti Saarnio, said its BRICS strategy has been “proceeding fastest in India”, adding: “We have seen a lot of interest among Indian device vendors, digital media houses, and mobile operators, and they all are very keen to work with an alternative to the currently dominating mobile operating systems. India deserves its own regional mobile ecosystem, an open platform, which supports local Indian services and businesses.”

One factor playing into’s Jolla’s hands here is the profit squeeze on Android OEMs. Competing in that handset space has never been tougher. Jolla’s offer of a revenue-share for sales generated via an OS that foregrounds local brands is the carrot for BRICS brands to take a punt on an Android alternative — and one that can still tap into a sub-set of Android apps.

“By integrating India’s largest online marketplace Snapdeal to a prominent location in the Sailfish OS user interface, it will drive value for both Snapdeal and consumers by making online purchases just swipe away,” is how Jolla’s PR for the freshly inked Snapdeal ecommerce partnership spins it.

Commenting on its involvement in a statement, Snapdeal’s Karan Khara, VP of strategic alliances, added: “Mobile is driving the online commerce growth in India; we see more than 75% of our sales coming through the mobile platform. We are very excited to be a part of another first by Jolla and are confident that the Sailfish India ecosystem will receive a great response from users across the country.”