Yesterday, the FBI filed an order compelling Apple to unlock an iPhone used by Syed Farook, one of the attackers in the San Bernardino shooting incident late last year which left 14 people dead.

Shortly thereafter, Apple CEO Tim Cook published a bold statement indicating that Apple planned to fight the order. Apple was joined by the Electronic Frontier Foundation, which said it would aid  in the fight.

We’ve already covered the nuts and bolts of the request, as well as Cook’s response and the White House’s response to that response. You can read those for a primer. There has been a lot of ink spilled and there will likely be a lot more, but there are a few questions that I think deserve a closer look — and there is a broader point to be made that will likely get obfuscated by people pursuing technical details rather than implications.

This current order is all about Apple refusing to unlock a single device for the FBI. It is not to be confused with the related, but bigger, battle over the government forcing tech companies to weaken their encryption by introducing a ‘secret’ key that only they have.

The key question of the day is this: Why is Apple fighting not to unlock a terrorist’s iPhone, instead of waiting to fight their big battle over encryption back doors? Let’s dissect it.

The government wants Apple to create a ‘one-off’ version of iOS that it could install on this device with three key changes:

The final condition there is the scariest, and the one that Apple objects to the most. Don’t get me wrong. Cook’s letter clearly states that Apple is opposed to all of the conditions, but that last one is different. It is asking Apple to add a vulnerability to its software and devices, not just ‘remove’ a roadblock.

There is a possibility that Apple could drag this out with the FBI for a very long time, arguing about reasonable demands or the costs of this to Apple (which could be prohibitive as signing firmware is an incredibly non-trivial process). One outcome could be that Apple grinds down the asks until they just disable the auto-erase function, which is an operating system option that already exists, and leave the rest of it to the FBI to figure out.

But that final ask is what the entire objection hinges on. The All Writs Act, passed in 1789 (yes, a 200-year-old law,) is being used to force Apple to comply. The fact that the act is being used to try to make Apple do a lot of work to modify iOS and to add functionality that would significantly weaken its products and their security will likely be at the core of Apple’s defense when this gets to the courts. It’s a huge ballooning of the scope of the AWA, and it sets a precedent for allowing the government to force Apple or other companies to modify their systems to allow access to your private data.

And herein lies the rub. There has been some chatter about whether these kinds of changes would even be possible with Apple’s newer devices. Those devices come equipped with Apple’s proprietary Secure Enclave, a portion of the core processing chip where private encryption keys are stored and used to secure data and to enable features like Touch ID. Apple says that the things that the FBI is asking for are also possible on newer devices with the Secure Enclave. The technical solutions to the asks would be different (no specifics were provided) than they are on the iPhone 5c (and other older iPhones), but not impossible.

If I had to bet, Apple is probably working double time to lock it down even tighter. Its reply to the next order of this type is likely to be two words long. You pick the two.

The point is that the FBI is asking Apple to crack its own safe. It doesn’t matter how good the locks are if you modify them to be weak after installing them. And once the precedent is set then the opportunity is there for similar requests to be made of all billion or so active iOS devices. Hence the importance of this fight for Apple.

This is why the debate around this particular order should not focus overmuch on the technical aspects — but on the fact that the government would be weakening the security of a private company’s product, potentially impacting the civil liberties of American citizens and foreign nationals worldwide that use those products.

Apple has complied with government information requests for years, and likely did so in this case. It is technically possible, for instance, to retrieve data from iCloud backups of devices. Farook’s device was last backed up in October 19th of 2015, which means that the FBI already has access to that data. The agency can use other avenues (and likely has) to gather data about calls by issuing information requests to cell carriers, for instance.

There are also already tools that the law uses to access passcode-locked iPhones. Many of these tools are bundles of programs that use jailbreak exploits to gain access to the iPhone’s memory, and then a suite of tools to access and analyze the data. These tools are then branded with a security firm’s rubber stamp and sold to law enforcement. When the exploits are repaired by iOS updates or patches, the tools become ineffective.

The idea that a government-issued phone that the FBI says Farook used to talk to co-workers would be used to openly facilitate an act of terrorism is somewhat far-fetched.

Instead, it is being used as a crowbar that essentially forces Apple to oppose the order. Regardless of the outcome, it’s likely that this case will be used to bolster the call for Congressional legislation that forces American companies to weaken their encryption by installing a ‘back door’ for the government.

Which brings us back to a question of philosophy.

Two Lines In the Sand

There are other battles to come in this fight. Encryption of data on iPhones, for instance, is another whole technical gambit, one that Apple has made great efforts to remove from the equation by making it impossible for them to decrypt customer data even if requests were made.

That would require that Apple modify its software and firmware on its devices to enable governmental agencies to bypass encryption. Once that method exists, there is absolutely, positively, no way for it to be kept solely for the use of the government. It also raises the question of how any international user of an iPhone would ever feel safe — especially given what we now know about the government’s electronic surveillance capabilities and its willingness to use them.

Apple is choosing to fight this battle now, rather than later. Cook’s letter draws a line out on the beach, where we’re still talking about allowing brute force cracking of iPhone passwords — rather than right up against the fortress, where we will be fighting for our right to secure encryption.

It’s a gambit with risks, for sure, outlined well by Ben Thompson here. If Apple loses this battle because the court sees a request for a terrorist’s iPhone to be unlocked to be reasonable, then it is going to be that much harder to fight the encryption battle later. But Apple sees this as the line — the modification of one of its products to weaken its security. To Apple, any back door is still a back door, and an unacceptable condition. It doesn’t matter to Apple whether the fight is over a passcode or over encryption. Like I said, it’s a risk, but it’s one that Apple feels it must take.

All of the various outcomes of this situation make alterations to the playing field.

The government gets Apple to add a weakness to a product? A precedent for weakening all security.

Apple fighting back successfully? A possible precedent for protecting the users of all smartphones iOS, Android and otherwise.

A potential win in the courts? Precedent to protect security, but also possibly to force Congress to ruin American encryption. 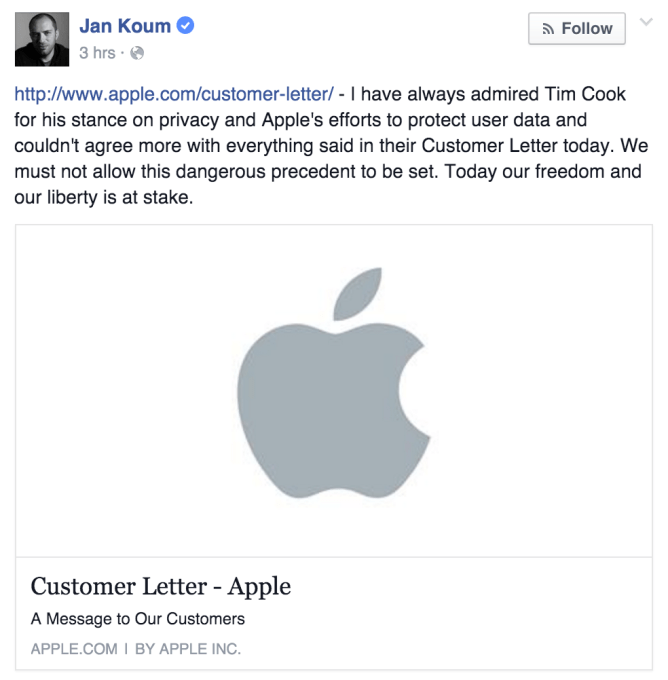 Apple is taking a bold stance here, but is standing somewhat lonely at the moment among its direct peers. Jan Koum of WhatsApp — who has had his own run-ins with information requests — posted in support of Cook’s letter. And the EFF and the ACLU are both taking Apple’s side as well. Just before this article was published, Google CEO Sundar Pichai tweeted, supporting Apple’s position.

Other tech giants like Amazon, Facebook and Microsoft have yet to weigh in — though they have potentially just as much to lose or gain. Whether this is because they have facilitated these requests without a fight, who knows? For Apple’s part, this isn’t the first time that Cook has taken a strong stance on security and privacy, his speech last year summed up how Apple has used it as a differentiation point before and since.

This is a seminal battle between the biggest tech company on the planet and the most powerful government on the planet. This is why it’s important that we don’t get mired down in technicalities. For Apple, and for us, this is not a question of can we, but a question of should we. A question that will have implications for everyone from journalists to heads of state to private citizens of all countries.