In recent months, Vevo has been working to extend its brand from being best-known as the provider of original music videos on YouTube to being a service for music discovery in its own right. The company in November rolled out an upgraded iOS experience as a part of this larger vision, and has today extended that experience to Android and Apple TV.

Similar to the iOS version, the new Vevo Android application also puts a heavier focus on personalization. At first launch, the app will prompt users to select their favorite artists in order to begin training Vevo’s recommendation algorithms. This process allows the app to create a special “Spotlight” feed which features playlists and videos tailored to an individual’s interests. Immediately, the app create a playlist called “My First Playlist” as a result of this customization.

There’s also a “Favorites” section for keeping track of your favorite songs as well as a “New For You” playlist which takes inspiration from Spotify’s “Discovery Weekly.” Like its rival, Vevo also releases this new playlist on a regular basis – it’s updated every Monday, the company says. 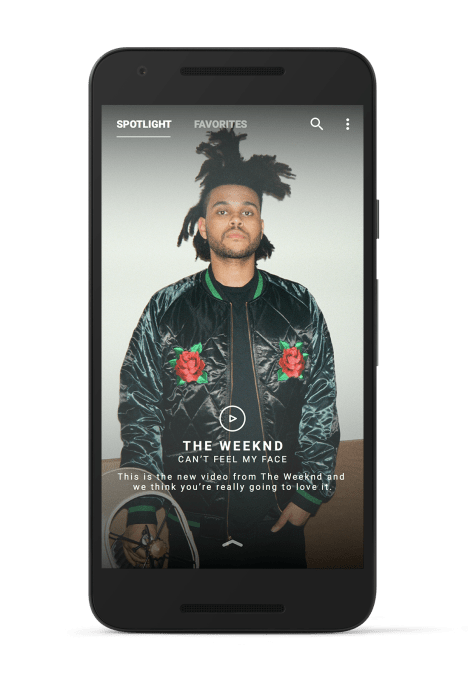 In addition to expanding the revamped mobile user interface from iOS to Android, Vevo has also today launched on Apple TV. This tvOS app syncs with users’ mobile apps in order to bring their playlists and favorites to the big screen. But the app is not just a blown-up version of its mobile counterpart.

Instead, Vevo has designed the Apple TV app to offer more of a lean-back experience for times when you just want to watch your favorite videos and not have to actively manage your playlists and track selections. Thanks to Vevo’s ability to now better understand a user’s personal tastes, the Apple TV app can simply start autoplaying videos you like with little effort.

However, if you want to take control, you can also do that, too. The tvOS app also supports browsing through videos, search, as well as the ability to manage your favorites section and playlists. Naturally, the changes you make on Apple TV are synced back to your mobile apps, too.

Vevo, a joint venture controlled by Universal and Sony, has had a symbiotic but sometimes tense relationship with YouTube over the years. It’s telling that Vevo launched its refreshed iOS app on the same day that YouTube unveiled its own music video app, for example.

Under the leadership of new CEO Erik Huggers, who previously built and launched BBC’s iPlayer and Intel’s OnCue (which later was acquired by TechCrunch parent to become go90), the company has been trying to branch out from YouTube’s shadow to become a destination of its own.

“Artists and audiences deserve great music video experiences, whether on mobile devices or connected TVs,” said Huggers, in an announcement. “The launch of our new Apple TV app represents an important milestone for Vevo. We continue to invest in what we believe is the premium platform for music videos and related original content.”

Adding elements of personalization to music streaming apps is something all the major players in the industry are doing as of late, from Spotify to Apple Music to Pandora and others. For example, Pandora last month rolled out a new “Browse” experience that will show you artists relevant to you and which improves the more you use the service. The company had also recently added “thumbprint radio” – a mix of user favorites and recommendations.

Apple Music, meanwhile, tries to suggest content with its “For You” section, and Spotify has moved beyond its recommended playlist to help recommend nearby concerts, too.

But Vevo’s bigger competition is really itself. Or rather, its own videos on available on YouTube. Vevo today has over 160,000 videos which see, on average, 12 billion monthly views worldwide. However, as more users watch on mobile and connected devices, the company has a shot at carving out its own niche and grow it dedicated user base.

To do so, it will need to get users interested in using its standalone app instead of seeking out its content on YouTube. Vevo’s revamped look-and-feel combined with these more powerful personalization features is a good first step at that.

Plus, the company tells us it now does about three-fourth of its views outside the U.S., with high growth in areas like Latin America and Western Europe where Android has a really strong footprint. This opens Vevo up to a much larger addressable market, the company notes.

The new apps are available on Google Play and the Apple TV App Store.